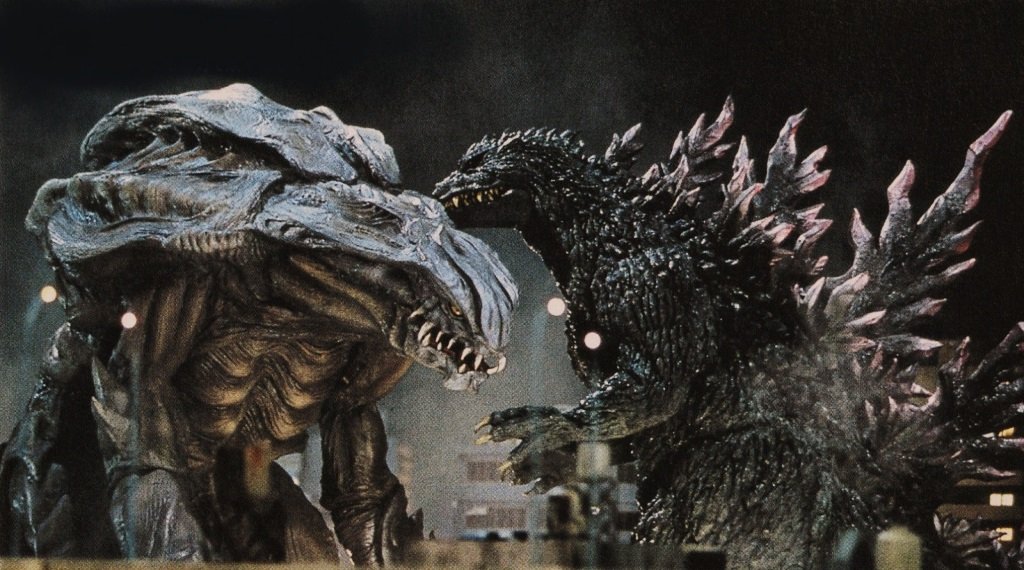 To most American viewers, the original run of Japanese Toho Godzilla films will never be more than exercises in camp. In the age of CGI, who’s going to take a man in rubber suit stomping on toy trucks and miniature cities seriously? The country that gave birth to the lizard king, of course.

After Roland Emmerich’s Godzilla flopped, Toho took back their home grown movie monster turned cinema hero for the second reboot of the franchise and the third generation of movies. Godzilla 2000 (Japan, 1999) swept away a generation of sequels and pretended that most (if not all) of the films since the original Godzilla never actually existed.

Godzilla is on the move again just as an ancient UFO is dredged up from the ocean. In a fitting bit of turnabout, the script appropriates Roland Emmerich’s Independence Day, though on a significantly smaller scale and with a Japanese giant monster sensibility: a lone silver spaceship parks on a Shinjuku skyscraper, drains the city of all computer information, and transforms into a mutant monster the resembles something between a skyscraper sized Predator and Jabba the Hut’s dungeon ogre from Return of the Jedi. Meanwhile an all-volunteer force of science nerds called the Godzilla Prediction Network, run by peacenik professor Yuji (Takehiro Murata) and his precocious adolescent daughter, clashes with their arch rivals, the Crisis Control Institute, a government strike force armed to destroy Godzilla run by Yuji’s bloodthirsty nemesis Katagiri (Hiroshi Abe, whose eyes bug out in glee every time he launches a missile).

The film’s saving grace is Godzilla himself, the James Bond of giant monsters, looking more fierce and royal than ever. Screaming his roar while stomping through modern cities like some avenging force of nature, this isn’t Emmerich’s post-Jurassic Park garden variety dinosaur of the blandly Americanized 1998 Godzilla but a lizard king with dignity, stature, and personality. The final third is a giant monster version of a WWE match between the Big G and the alien upstart, with the pug ugly alien mutating on the move. Digital effects are added to the Godzilla formula to sweeten and tweak the spectacle but it still features the crunch of lovingly detailed buildings rendered to splinters in a single step, the rubble and dust left in the wake of a prehistoric body slam, and the noble profile of the scaly gray one in action. It’s a juvenile thrill that CGI can’t touch.

, iTunes, GooglePlay and/or other services. Availability may vary by service.
Godzilla 2000 [Blu-ray]