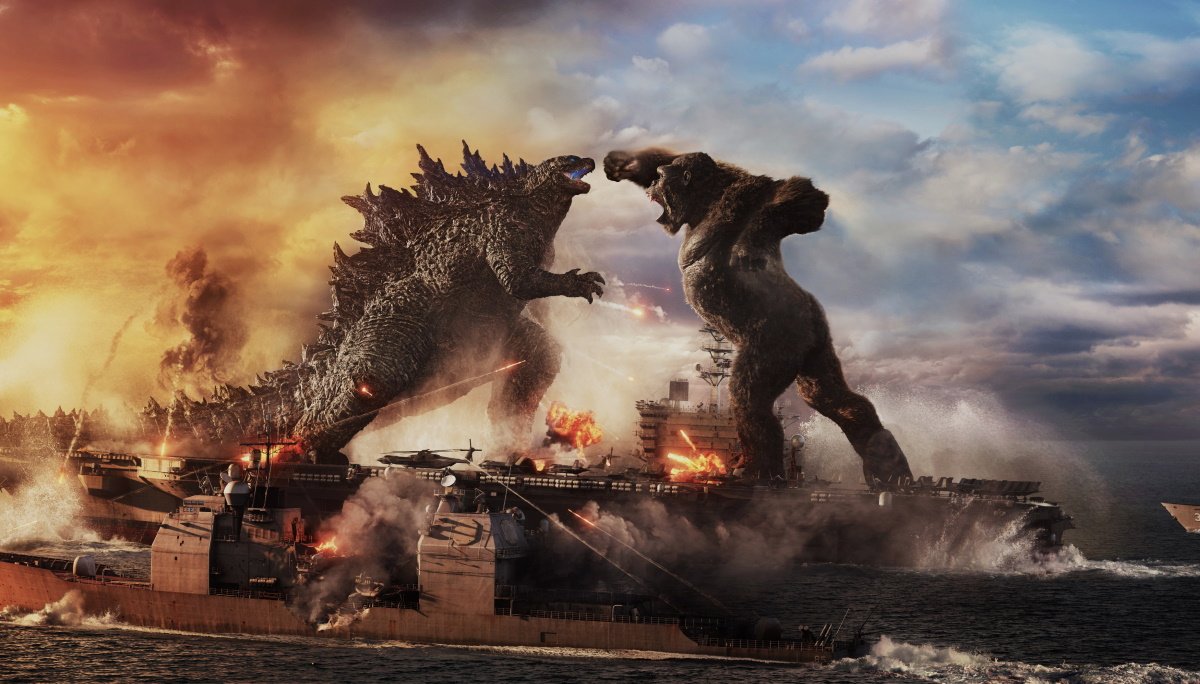 Once the king of the monsters in Japan, Godzilla was revived and reborn as an American big screen sensation in the monster mash spectacles of Godzilla (2014) and Godzilla: King of the Monsters (2019), which reimagined the nuclear-spawn lizard king as an elemental “Alpha Titan” protecting Earth from other giant monsters. King Kong, America’s first big screen giant creature sensation, was given similar treatment in Kong: Skull Island (2017).

It was inevitable that the two would meet in a giant monster battle. In fact, it was even foreshadowed in a post-credit scene in Kong: Skull Island that sets up an interconnected “Monsterverse.” The two worlds collide in Godzilla vs. Kong (2021), which opens with a seemingly unprovoked attack by Godzilla on Pensacola, Florida, and is followed almost immediately with Kong being transported from his secret island compound to the Antarctic.

This is one of these films that you have to take it at its face value, forget all of the narrative implausibilities (because we’ve already accepted the physical impossibilities), and just enjoy the giant creatures in action and the mythology that the film builds around them. So when the “Kong whisperer” scientist (Rebecca Hall) agrees to the plan, we jump directly to Kong chained to an aircraft carrier (echoing the 1976 King Kong) and the first battle royal between the giant creatures on the high seas.

The rather complicated plot involves hollow earth theory, a nefarious corporation with an underground high-speed rail spanning the globe, a team of conspiracy theorists, and a new take on the giant Mecha-Godzilla robot of the Japanese franchise. And yes, this is a film where everyone immediately accepts the most monumental revelations and sudden ideas within seconds and commits to them completely.

The human characters (played by Alexander Skarsgård, Millie Bobby Brown, Brian Tyree Henry, Demián Bichir, and others) play second fiddle to the screen giants and the film builds to the promised clash of the titans in the climax. But if the human characters are lacking, the CGI artists give Kong a personality and Godzilla a kind of elemental majesty, and those qualities help define the epic battle scenes.

Director Adam Wyngard, graduating from low budget horror films to big budget monster movie, makes sure that the action is big, easy to follow, and dramatic (where the murky King of the Monsters fails). The silliness of the plot and the logical gaps are more apparent on the small screen, where the spectacle isn’t as overwhelming, but it is still fun to watch and brings the tetralogy to a satisfying conclusion. At least until another installment is unleashed.

Both DVD and Blu-ray editions include ten featurettes covering the history and legacy of the two iconic screen creatures and special effects on three key battle sequences (running about 70 minutes all told). The Blu-ray also includes a feature-length commentary track from director Adam Wyngard.