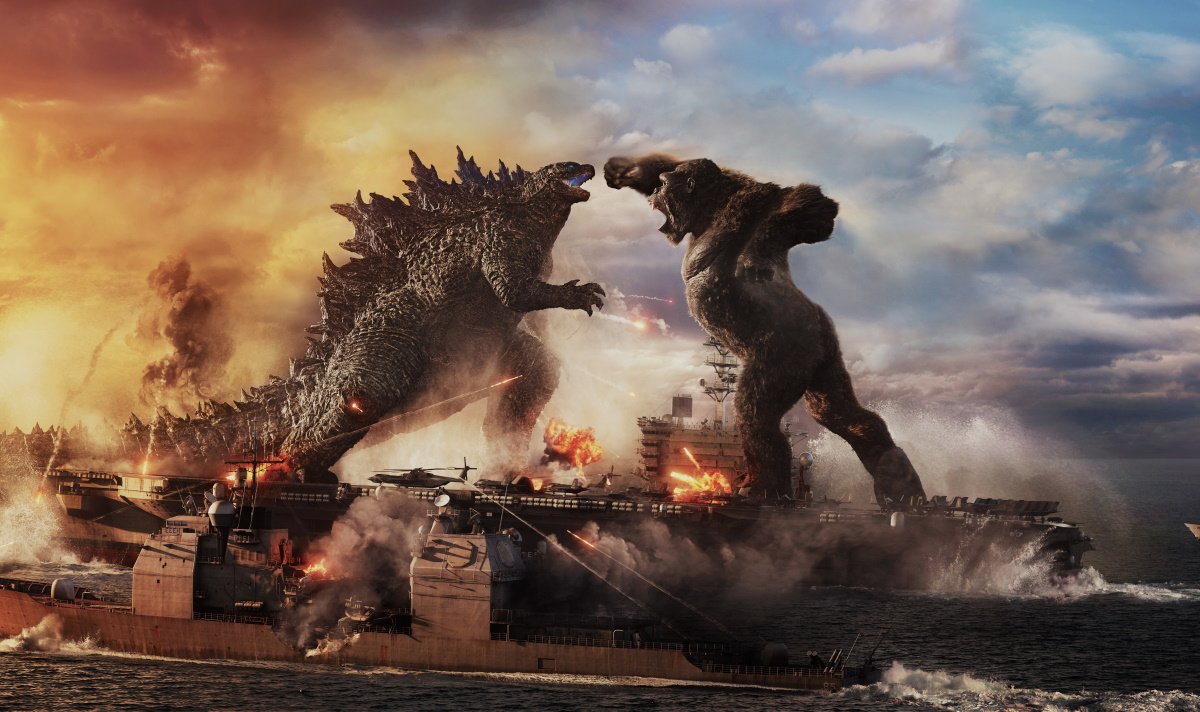 The two biggest movie monsters around go toe-to-claw in “Godzilla vs. Kong” (2021, PG-13) after the lizard king attacks Florida and the giant ape is set free from Skull Island for the inevitable clash of the Titans. The film, directed by horror movie veteran Adam Wyngard, builds on the mythology that has been laid down in the MonsterVerse movies from Legendary Entertainment and even brings in a special guest creature from the original old school Godzilla films. Alexander Skarsgård, Rebecca Hall, Millie Bobby Brown, and Brian Tyree Henry lead the human cast. Streams the same day it opens in select theater, but it is available for 31 days only. (HBO Max)

Idris Elba is the “Concrete Cowboy” (2021, R) of this drama of a troubled teen (Caleb McLaughlin) who spends the summer with his estranged father, who introduces the boy to the black urban horseback-riding community of North Philadelphia. The film, which premiered at the Toronto International Film Festival, offers a coming-of-age story in a culture rarely seen on screens. Lorraine Toussaint, Jharrel Jerome, and Method Man costar. (Netflix)

Tahar Rahim plays real-life serial killer Charles Sobhraj, who preyed upon western tourists on the “hippie trail” through Thailand, Nepal and India in the mid-1970s, in the limited series “The Serpent” (TV-MA). Jenna Coleman plays his girlfriend and partner in the British crime drama. (Netflix)

The documentary “Tina” (2021, TV-14) explores the dramatic life and career of Tina Turner, from her collaboration with her increasing controlling and ultimately abusive husband Ike Turner to her reinvention as a solo star in the 1980s. (HBO Max)

“WeWork: Or The Making and Breaking Of A $47 Billion Unicorn” (2021, TV-MA) charts the spectacular flame-out of the multibillion dollar start-up under the leadership of its big-spending, megalomaniacal co-founder, Adam Neumann, a would-be tech visionary with a messianic complex. (Hulu)

Gal Gadot returns as the screen’s greatest Amazon warrior in “Wonder Woman 1984” (2020, PG-13), where she’s roused to action by a magical ancient artifact and a supervillain named Cheetah (Kristen Wiig). Also on DVD and at Redbox.

“Mandela: Long Walk to Freedom” (2013, PG-13) stars Idris Elba as Nelson Mandella in the story of his life.

International passport: based on a true story, “Madame Claude” (France, 2021, TV-MA, with subtitles) stars Karole Rocher as a brothel keeper who built a base of wealth and power through her client base. Also new is the crime thriller “Sky High” (Spain, 2020, TV-MA, with subtitles), about a mechanic from the Madrid suburbs who begins pulling criminal heists.

True stories: people share stories about the clothes that mean the most to them in the limited series “Worn Stories” (TV-MA). Also new:

Wes Anderson turns his offbeat sensibilities to adolescence in “Moonrise Kingdom” (2012, PG-13), one of the great movies about misfits and outcasts finding their own way in a world where the adults are just as confused.

Available on Amazon Prime for the month of April only is the horror series “Creepshow: Season 1” (TV-MA), family drama “The Restaurant: Season 1” (Sweden, TV-14, with subtitles), and the provocative “Rectify: Season 1” (TV-14), about a man learning to cope with life outside of prison after his conviction is overturned.

“A Hologram for the King” (2016, R), based on a novel by Dave Eggers, stars Tom Hanks as a former corporate hotshot with one last shot to redeem himself after a disastrous business decision left him a pariah. (Amazon Prime and Hulu)

Russell Crowe and Paul Bettany star in “Master and Commander: The Far Side of the World” (2003, PG-13), Peter Weir’s sweeping nautical adventure. (Amazon Prime and Hulu)

The short documentary “The Last Cruise” (2021, TV-14) tells the story of the Diamond Princess cruise ship and the passengers who were quarantined aboard in the early days of the Covid-19 pandemic, using footage shot by the passengers and crew members themselves.

Viola Davis won an Academy Award for her performance opposite Denzel Washington in “Fences” (2016, PG-13), adapted from the play by August Wilson and directed by Washington.

Christina Ricci and Kelly Garner are globetrotting stewardesses in the early 1960s in “Pan Am: Complete Series” (2011, TV-PG), which also features Margo Robbie in her U.S. debut.

A team of desperate folks go in search of a fortune in a zombie no man’s land in “Train to Busan Presents: Peninsula” (South Korea, 2020, not rated, with subtitles). Streaming on both AMC+ and Shudder, as is the second season of the horror anthology “Creepshow” (TV-MA). (AMC+ and Shudder)

The second season of the Boston cop drama “City on a Hill: Season 2” (TV-MA) is underway with new episodes each Sunday.

The seventh season of the offbeat New Zealand mystery series “The Brokenwood Mysteries: Series 7” (not rated) is underway, with new episodes each Monday.

The docuseries “Moment of Truth” (TV-PG) looks at the never-before-seen story behind the murder of Michael Jordan’s father, James Jordan.

Ten films “Starring Dirk Bogarde,” from the World War II survival drama “The Sea Shall Not Have Them” (1954) to Rainer Werner Fassbinder’s thriller “Despair” (1978), based on the novel by Vladimir Nabokov, get a spotlight at Criterion Channel. Also new: