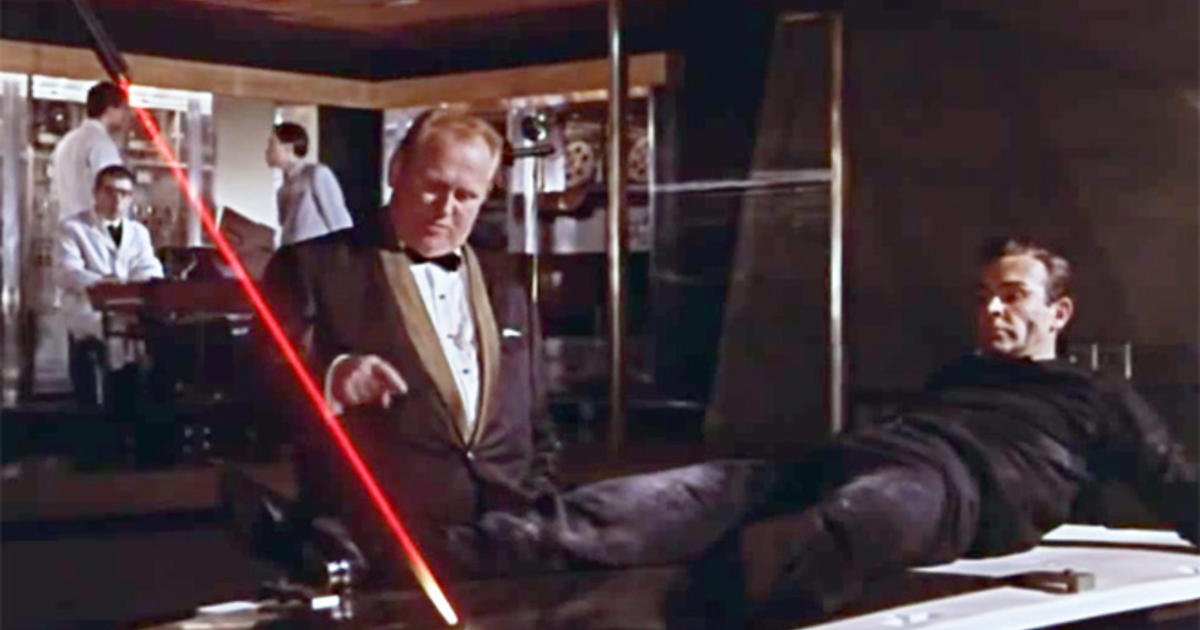 Sean Connery was the original big screen James Bond and for many fans still the definitive, a ruthless agent with dry martini wit and a way with the women. Goldfinger (1964) was the third film in the series but the first Bond blockbuster. It forged the formula of tongue-in-cheek wit, wondrous secret agent toys created by Q, and megalomaniac supervillains bent on world destruction. It was an instant smash hit and turned the series into a cultural phenomenon.

The first two films—Dr. No and From Russia With Love—transformed Ian Fleming’s debonair but ruthless character into suave yet brawny cold warrior who seduced beautiful allies and deadly femme fatales alike between batting international supervillains. The films were both unabashedly sexy and brutishly sexist, a cartoon of glib machismo with martini wit and international flair, and Sean Connery brought his Bondness to life with a mix of charm, arrogance, elegance and rough-and-tumble toughness. Goldfinger not only ups the ante on every level, it adds a few new elements that made the series.

German actor Gert Fröbe gave the series its first great larger-than-life Bond villain: Auric Goldfinger, a megalomaniac billionaire who smothers one victim in gold paint and crushes another in a scrap metal cube.

His right hand man is the first iconic henchman: Oddjob, a mute Korean bodyguard with a bowler that can decapitate an opponent with the flip of a wrist. While it teeters on the edge of demeaning stereotype, Hawaiian athlete turned actor Harold Sakata turned him into one of the most popular Bond bad guys.

Honor Blackman left a hit TV series, The Avengers, to play Pussy Galore, a tough private pilot with her own all-female Flying Circus. While she’s tagged with the first of many suggestive names featured in the series, she’s also the first Bond woman to hold her own with 007 and jump right in to join the big battles with the boys.

Everything is bigger and more fantastical here, from Goldfinger’s secret lair flying in the clouds to the glorious spy gadgets and gear courtesy of Q (including a sexy Aston Martin DB5 tricked out with machine guns in the grill and an ejector seat) to the massive set pieces created by production designer Ken Adams. Even the bold, brassy theme song belted out by Shirley Bassey set the bar for future theme songs.

“Of all the Bonds, Goldfinger is the best, and can stand as a surrogate for the others,” wrote Roger Ebert in 1999. “If it is not a great film, it is a great entertainment, and contains all the elements of the Bond formula that would work again and again.”

I’d agree with that. It’s not my favorite of the Bond films—From Russia With Love with Connery, On Her Majesty’s Secret Service with George Lazenby, and Daniel’s Craig debut in Casino Royale are my picks as the best of Bond—but it certainly ranks among the most essential. It inspired an industry of copycats, anti-Bond spy thrillers, and spoofs, from the tongue-in-cheek Our Man Flint and Matt Helm movies to TV shows The Man From U.N.C.L.E. and Get Smart.

The subsequent Bond films became bigger and more lavish even as Connery tired of the role and got lazy and jaded. Goldfinger presents Connery at his Bond best, all steely confidence and effortless panache with a cocky grin. For a cold warrior and borderline misogynist dinosaur (as Judi Dench’s 21st century M pegged him in the 2006 reboot Casino Royale), Connery’s Bond is irresistible.

The recurring team is back—Bernard Lee as the boss M, Desmond Llewelyn as Q, Lois Maxwell as Moneypenny—Shirley Eaton became famous as doomed victim of Goldfinger, and Cec Linder is CIA buddy Felix Leiter. It won an Oscar for it sound effects.