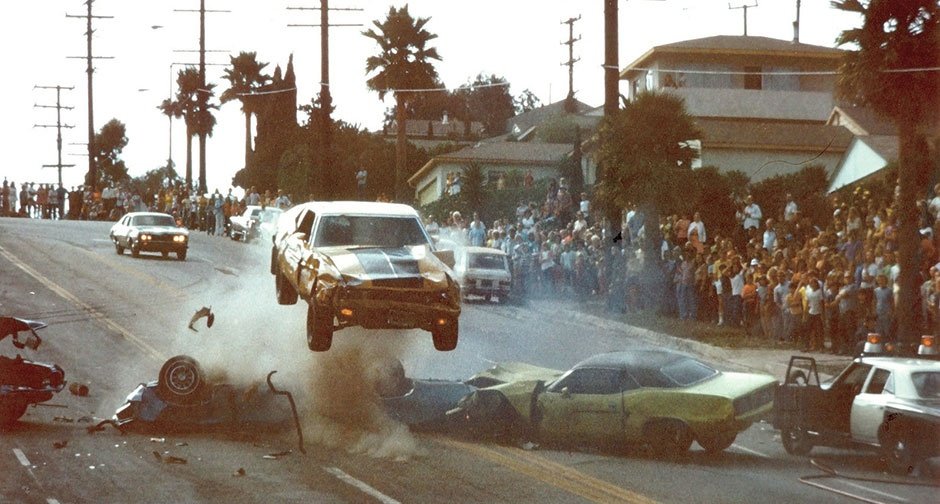 Gone in 60 Seconds (1974) – H.B. Halicki’s classic 1970s car crunch chase film, about a car thief who must steal 48 cars in a week, is perhaps the ultimate drive-in car chase movie. If that sounds like a backhanded compliment, then you don’t know the sheer visceral thrill of a great tire squealing, chassis-slamming, speed demon piece of auto outlaw cinema.

A car nut and mechanic with his own towing an impound business, Halicki was an amateur stunt driver who decided to make his own speed thriller and stunt extravaganza. He wrote, produced, starred, and did all of his own extraordinary stunt driving in the picture, and he gave top billing to his car, a yellow 1973 Ford Mustang named Eleanor. That’s a good indication of his priorities in the picture. The plot is perfunctory at best and Halicki is all thumbs when it comes to directing his wooden cast, but he’s a natural performer and has a confident efficiency in showing the mechanics of the car theft biz. All that, of course, is mere framework for a cascade of thrilling rubber-on-the-road stunt driving scenes leading up to one of the greatest car chases of all time: a 40 minute finale that roars through five LA basin towns and destroys 93 cars in the process and bangs, bashes and smashes Eleanor into a crinkled wreck.

It’s a masterpiece of stunt driving, down-and-dirty driver’s seat photography, and sharp, furious cutting; the unsung hero of the picture is film editor Warner Leighton, who paces the film perfectly and never lets it stall. Forget the messy Nicolas Cage in-name-only remake, this is outlaw auto cinema at its purest. It is more fun that it has any right to be. Halicki died in 1989 while working on a stunt scene for a sequel. This film (along with his 1982 follow-up, The Junkman) is his legacy, and it was restored a decade ago to present the indie action classic in its full glory.

Also on VOD on Amazon Video

and on disc with commentary, featurettes, bonus interviews, and deleted scenes.
Gone in 60 Seconds [DVD]