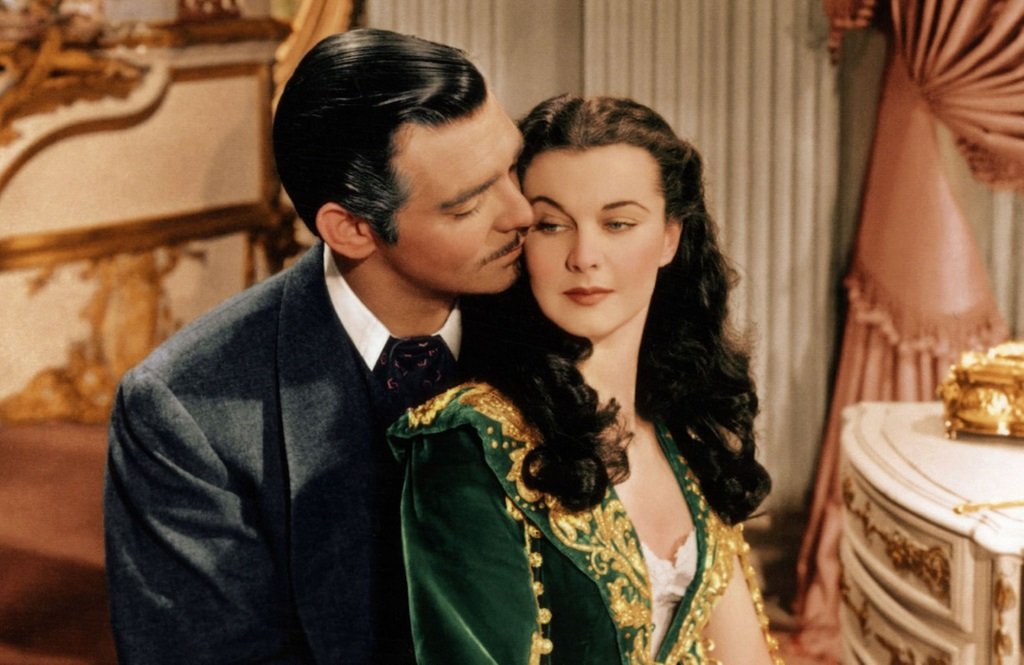 Gone with the Wind (1939), one of the most beloved and revered of American classics, showcases the best and worst of old Hollywood.

You can’t miss the idealization of antebellum South, presented as some sort of proud aristocracy blinded by arrogance and yet elevated to a kind of American Camelot served by complacent slaves, or the patronizing-at-best characterizations of the black folk, loyal to their masters in the face of Northern soldiers and carpetbaggers.

But the story of Scarlett O’Hara, the narcissistic yet driven Southern belle who defies all convention to rise from the ashes of the Civil War as a steely, ruthless businesswoman, is as seductive as they come. And David O. Selznick’s lavish super-production is the great exhibit in the argument for Hollywood filmmaking craft and moviemaking machinery, in this case filmmaking as a producer’s vision rather than a director’s art (the production went through at least three directors, with Victor Fleming ultimately taking screen credit).

British actress Vivien Leigh, then unknown in America, was a once-in-a-lifetime find. She plays Scarlett like a jungle cat, purring and soft yet ferocious when she wants something, while Clark Gable is a dream Rhett Butler: insolent, rakish, charming, and even noble under his gambling man exterior. How could she prefer that aristocratic fop Ashley Wilkes (Leslie Howard) to this red blooded Southern wolf?

On Blu-ray and DVD in multiple editions. It debuted on Blu-ray for its 70th Anniversary in gorgeous remaster with color that looks as if it’s lit from within, a particular kind of warmth unique to this era of Technicolor, and it fits the entire film on a single disc.

All of the Blu-ray and DVD special editions include commentary by film historian Rudy Behlmer (who keeps it interesting and informative for four hours!), the superb 1989 made-for-cable The Making of a Legend: Gone With the Wind, an exhaustive feature-length documentary that features rare screen tests of the all-star gallery of female stars who didn’t land the lead, the original prologue from the International release version, and more interviews, featurettes and archival shorts and supplements.

The 70th Anniversary Ultimate Collector’s Edition, the most lavish special edition to date, includes the 1992 documentary miniseries MGM: When the Lion Roars (a sprawling history of the studio hosted by Patrick Stewart), the 1980 TV movie The Scarlett O’Hara War (about the drama behind the production and casting, starring Tony Curtis as David O. Selznick) and the 2009 TCM documentary 1939: Hollywood’s Greatest Year. The box set (and it’s a box, all right) also includes a booklet, miniature reproductions of art prints and the original theatrical program and a CD soundtrack sampler.