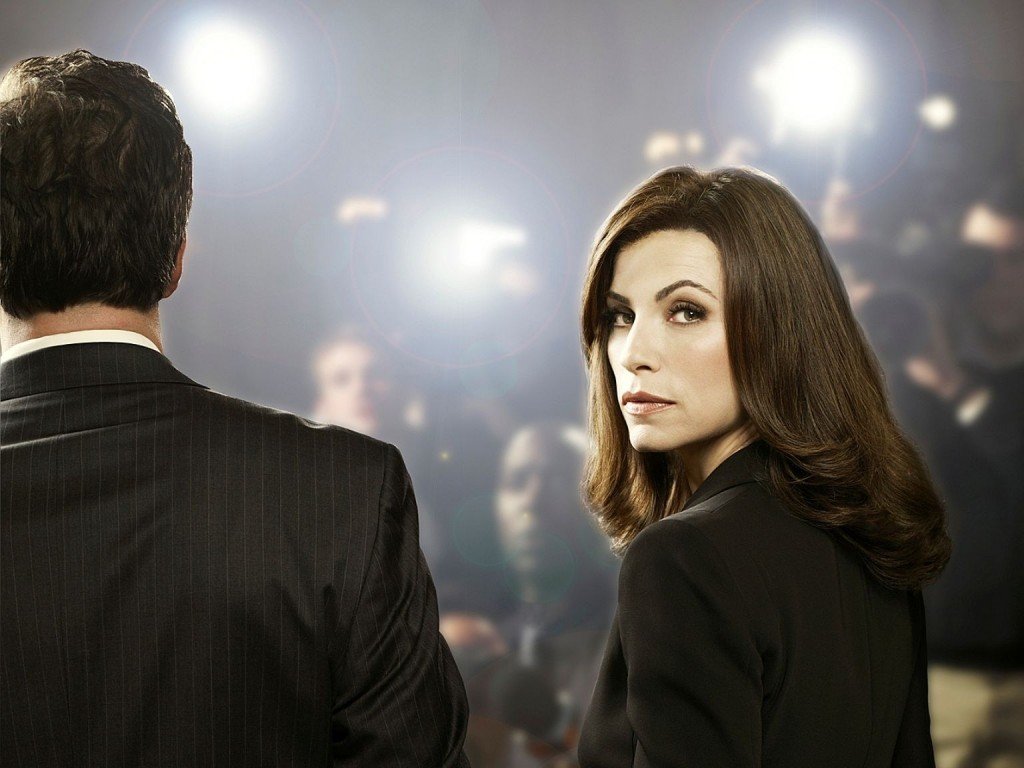 Created by Michelle and Robert King, the first season of The Good Wife offers a classic legal drama reframed by a ripped-from-the-headlines twist. Julianna Margulies’ Alicia Florrick is the publically loyal but privately ambivalent wife of a disgraced Chicago politician (Chris Noth), who resigns in the face of a sex scandal. “Six months later,” Alicia goes back to work as the junior attorney at a firm run by an old friend and colleague (Josh Charles) while her husband Peter (now in prison) fights his conviction for corruption. The cases are conventional for the most part, what with a firm that (with exceptions) manages to represent only innocent clients and pulls Perry Mason-style last-minute saves (that changes as the show evolves). What makes it interesting in these early episodes is how the cases reflect back on her struggle with her marriage and her loyalty to a man who is a political animal even in disgrace. As season two begins, he’s out of prison and back in the arena, running for State’s Attorney despite the scandals and public airing of his infidelities. Only in Chicago.

As entertaining as these early seasons are, the evolution is far more interesting. The private life of Alicia and Peter, working through a public affair churned through the tabloid media and playing the happy couple in the spotlight while privately separating, gave the show its backbone while the case-of-the-week trials got more complicated and interesting. The line between professional responsibility to clients and personal belief started to collide more often, which only made them more passionate in the cases they actually believe in. The romantic tension between Alicia and Will simmers, competition with fellow associate Cary (Matt Czerny) shifts from adversarial to collegial and back, Alicia’s wary professional relationship with senior partner Diane (Christine Baranski) slowly builds trust, and her friendship with the firm’s investigator Kalinda (Archie Panjabi) blossoms (at least in the early seasons; the characters are essentially separated in Panjabi’s final seasons, ostensibly due to a rift between the actresses, if rumors are to be believed). And yes, that doesn’t begin to address all of the major characters, from Peter’s very zealous campaign manager and chief of staff Eli Gold (Alan Cumming) to the Florrick children Grace (Makenzie Vega) and Zach (Graham Phillips), who grow into adulthood over the course of the series.

It also became a showcase for guest stars, many who turned into recurring characters, some of them weaving through the entire run of the show. The show shot in New York and much of it cast from a pool of stage actors from the city, giving the show a mix of high-caliber actors that didn’t show up in the LA productions. Some of the memorable appearance include Michael J. Fox as a competitive and manipulative rival who make his degenerative condition part of his courtroom style, Gary Cole as an expert witness with a libertarian streak, Carrie Preston as an eccentric attorney whose mind constantly crosses its wires, Nathan Lane, Maura Tierney, Amanda Peet, Matthew Perry, Oliver Plat, Linda Lavin, Kyle MacLachlan, John Noble, John Glover, and Dylan Baker as a multi-millionaire who has the firm on retainer for all those instances he’s accused of murder. Because, really, doesn’t everyone have that problem? And keep an eye out for Mike Colter as Lemond Bishop, a client and Chicago crime boss with a clear understanding of how power works. Colter left the show to play Luke Cage in the Netflix Marvel Universe (debuting on the first season of Jessica Jones).

A few bumps aside, by the fourth season the show found its voice and its tone, delivering both a clever and engaging legal show with cases and twists and offbeat characters that rival David E. Kelly’s shows at their best, and an adult drama with real stakes and consequences for every choice, personal and professional. The death of a major character is season five is woven into the fabric of the show, which spends a good part of the season exploring the way the characters deal with the loss personally and professionally. In season six, Alicia’s run for office acknowledges the dirty politics of Chicago in both parties and the reality that lawyers represent guilty parties as often as innocent ones. Even better, it explores the toll the election takes on Alicia and the family as she attempts to strike a balance between playing the kind of political hardball it takes to both win and hold office, and remaining true to her beliefs in justice and fair play.

If the seventh and final season wanders a bit, it’s a forgivable slip and not in any way fatal, and the Kings resist the temptation to wrap things up neatly. As The Good Wife ends, it’s just another bump on the road to an uncertain future.

Add to watchlist or watch on Hulu