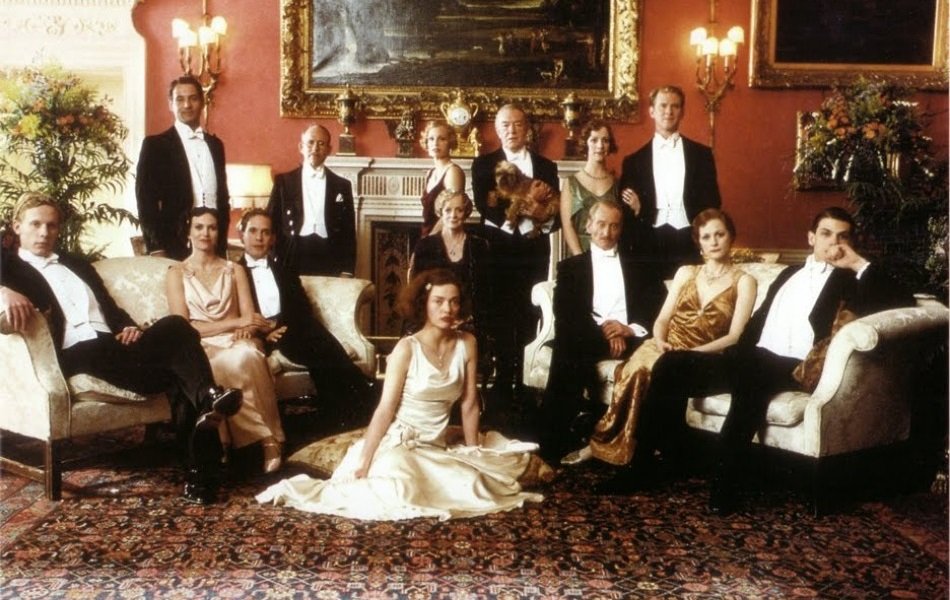 In Gosford Park (2002), Robert Altman brings his gift for big, sprawling dramas knit with a fine weave of characters and a massive cast up to the task of filling them up with lives to the Merchant Ivory idiom of the manners and manors of Britain’s upper crust of yesteryear, 1932 to be specific. The weekend in the country drama begins as a sprawling Upstairs Downstairs peak into class and transforms into a smartly lampooned Agatha Christie drawing room mystery, but underneath simmers a world of ambition, contempt, regret, and vulnerabilities hidden behind the carefully constructed surfaces of class and aristocratic privilege.

Altman loved actors and this is a film filled with marvelous performers. Kelly MacDonald, as a novice ladies maid to the witheringly caustic Countess (Maggie Smith), is our entry to this stratified culture. Smith’s cutting commentaries explain the shark infested social group circling around host Sir William (Michael Gambon), the boorish industrialist who supports the penniless clan of haughty aristocrats, among them Kristin Scott Thomas, Tom Hollander, James Wilby, and Laurence Fox, while the head manservant (Alan Bates) and housekeeper (Helen Mirren) hold their own kind of court downstairs. The manor’s plainspoken veteran housemaid (Emily Watson) guides MacDonald through the downstairs maze, which includes a piercing turn by Clive Owen as a fiercely independent valet.

There’s a murder which an obsequious, dull-witted Inspector (Stephen Fry) investigates, tiptoeing around his suspects like a toady, but the mystery spoof is merely a structure for Altman to explore the culture and its characters in a twist on Jean Renoir’s biting, bitter satire The Rules of the Game. This stiff wax museum of titled ne’er-do-wells is frozen in an antique system of privilege and their servants—at least those raised in service—have caught the disease. But Altman also has a hearty sense of sympathy for the players and a willingness to look beyond the facades to find the beating hearts inside. Everyone has their reasons, but Altman is more interested in their vulnerabilities, their resolve, and their fears.

The screenplay was written by Julian Fellowes, then a longtime actor with a few writing credits to his name, who fleshed out a story idea by Bob Balaban and Robert Altman with his own perspective on the manners and attitudes of British aristocracy, the pecking order of both high society and the servant class (which has its own hierarchy), and the unspoken rules of communications across class lines. A decade later, Fellowes created Downton Abbey features Gosford co-star Maggie Smith. Altman takes it in a completely different direction than Fellowes does in his own romanticized take on the good old days of a petrified class system, but both have an affection for the foibles of their characters. Fellowes, by the way, won an Oscar for his screenplay.

It’s one of Altman’s most satisfying and richest films, no small praise in a career filled with masterpieces. And with the Downton Abbey coming , it’s a fine time to revisit the seed from which it sprang.

It also earned Robert Altman a Golden Globe for his direction, two BAFTA awards, and a nod from the Screen Actor’s Guild for its ensemble, among its many awards.