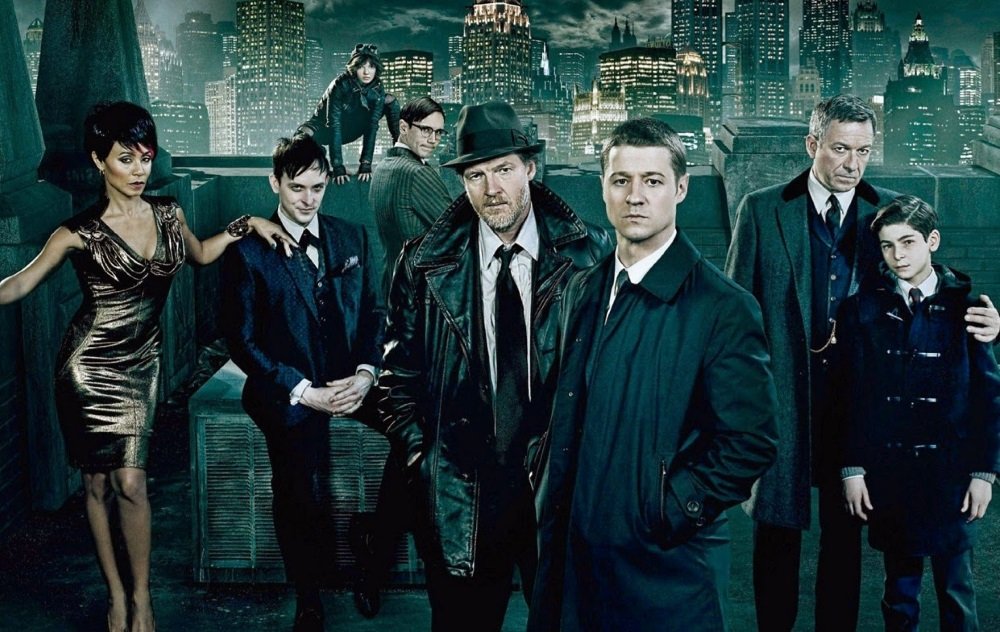 Gotham: Season 1 is TV’s most lavish entry yet on small screen superhero operatics, a kind of “Batman before Batman” comic book noir look at the cesspool that is Gotham City, the dark, corrupt city that spawned the caped crusader.

That isn’t necessarily to call it the best—based solely on debut seasons, I would happily hand that mantle to The Flash on WB, where the gee-whiz rush of “look what I can do” is woven through the romantic melodramas and family tragedies and supervillain conspiracies with both intelligence and a sense of fun—but Gotham is produced with a self-awareness that balances the shadowy urban crime drama that defines the CW show Arrow (Seasons 1 and 2 on Netflix) with larger-than-life personalities that look forward to the “Batman” universe, splashy imagery that evokes the comic book origins, and a retro sensibility, mixing and matching fashions and architecture and personal style from decades of inspirations.

Developed for TV by Bruno Heller (The Mentalist) and co-produced by Danny Cannon (Nikita), who also directs the pilot, Gotham begins with the murder of the millionaire parents of young Bruce Wayne (David Manouz)—the defining moment from the original comic book mythology that inspired his transformation into Batman—and the promotion of honest, earnest cop Jim Gordon (Ben McKenzie of Southland) to detective in the thoroughly corrupt Gotham City Police Department. He and his partner, Gotham PD veteran Harvey Bullock (Donal Logue), get the case and Jim gets a crash course in the ways of Gotham, where the city’s mob boss Carmine Falcone (John Doman) calls the shots and the police fall in line.

As the schoolboy Bruce starts to take stock of the reality of the city (and the rot at the head of Wayne Enterprises, which he has inherited but doesn’t actually run), Jim draws a line against the corruption that runs all the way through city hall, making a lot of enemies along the way, but he finds a reluctant but loyal ally in Harvey.

McKenzie is great casting as Jim, the good man in a bad system. He builds on the integrity and sincerity of his Southland cop and adds a toughness and fortitude that allows him to play hardball without slipping into moral compromise. Logue brings one of the great characters from the comic never seen in a live-action film before to life. Harvey is an old-school tough guy who has survived by learning when to look the other way and found a place in an ecosystem where the mobs are protected from on high where he can still do some good. He sees Jim as a naïf at best and a nuisance at worst but his integrity gets under Harvey’s scar tissue, rousing his sense of justice and giving him hope that Jim is someone who can finally make a difference.

The show features a colorful rogues gallery of villains but the most engaging characters are Batman’s classic nemeses before the costumed personas: rising underworld player Oswald Cobblepot (Robin Lord Taylor), street waif and teenage cat burglar Selina Kyle (Camren Bicondova) who befriends fellow orphan Bruce, police forensics expert and riddlemaster Edward Nigma (Cory Michael Smith), who will become Penguin, Catwoman, and Riddler just as sure as Bruce Wayne will become Batman. If all you know of The Penguin is from the old sixties TV show or Tim Burton’s Batman Returns (1992), this will give you a whole new perspective on the character, a cunning psychotic who has been transformed from cartoon criminal to a brutal Gotham mob boss in the comic books of the last few decades. The most colorful of crooks is original to the show: Fish Mooney, a flamboyant underboss who takes on Falcone, played by Jada Pinkett Smith.

I can’t point to all of the specific influences on the series, but among them are Frank Miller’s “Batman: Year One” and the flashback follow-ups by Jeph Loeb and Tim Sale, “The Long Halloween” and “Dark Victory” (also set in the early years), and the contemporary series “Gotham Central,” about the police of Batman’s hometown. The difference here is that there is no Batman, at least not yet. But the season finale introduces a major piece of Batman lore that the next season is sure to build on.

22 episodes available to binge watch or view at your leisure.