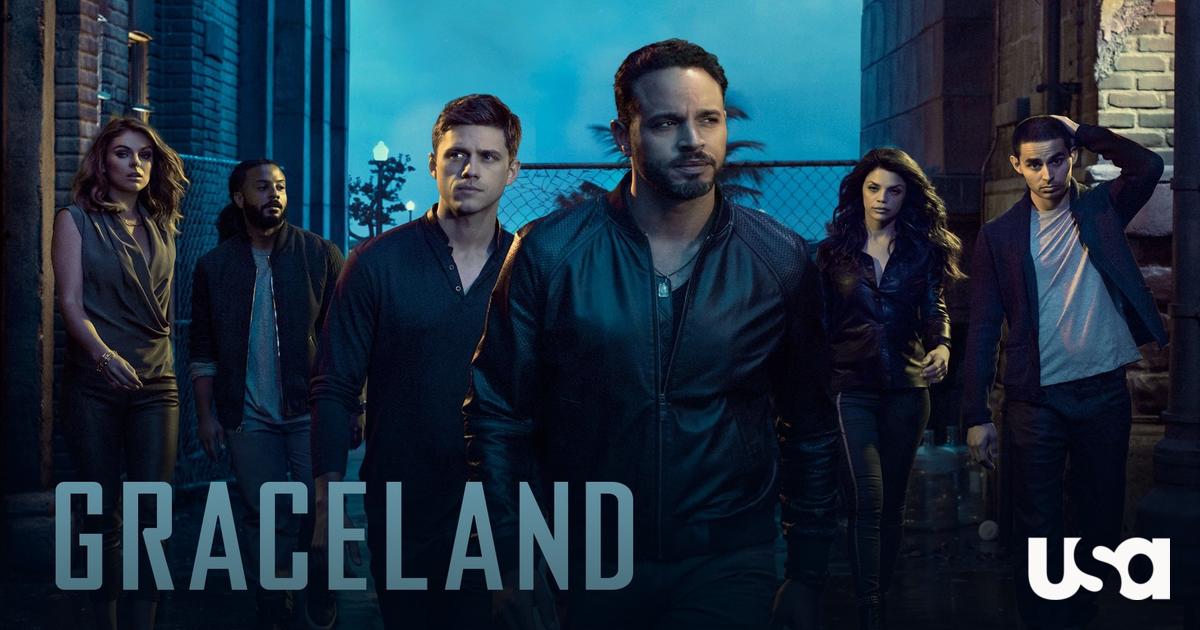 The USA original series about undercover agents who work out of a beachside manor in Los Angeles, takes a grittier approach than the usual USA network original series, which are generally defined by personable characters with lots of personality, light drama with plenty of humor and banter, and bright, colorful visual design on a budget. Graceland: Complete Series (2013-2015) is more like an FX crime drama like Justified than the playful USA approach to action.

The show stars Daniel Sunjata (Rescue Me) as veteran FBI agent Paul Briggs, the big brother of the melting pot of various agencies sharing the beachhouse as a base of operations. He’s become so reckless that the agency sends in hotshot rookie agent Mike Warren (Aaron Tveit) to secretly investigate him. Vanessa Ferlito, Brandon Jay McLaren, Serinda Swan, and Manny Montana fill out the house as various FBI, DEA, and Customs agents all working solo but pitching in whenever a housemate needs a hand on a case.

Think 21 Jump Street meets The Real World: Hot Undercover Agents on the L.A. Coast. The drama is a mix of deep cover drama, with all the secrets and schemes that entails, and hip action thriller taking on drug dealers, gun runners, gangs, and cartels. Sunjata plays the role as both veteran pro and adrenaline junkie, feeding on the danger and excitement of the job while Tveit is the clean cut, by-the-book company man who learns to improvise and cross the line to make a case. The motto of the house is “no secrets” but Sunjata has plenty of them, which only compounds suspicion when the agent investigating him is killed.

The first season ends with Mike returning to Washington D.C. but the second season brings him back to follow up a drug smuggling ring, an investigation that pulls the entire team under his command (and not without some resentment) and reveals an even bigger conspiracy involving human trafficking and a crooked agent with the bureau. There’s even more suspicion and distrust this season as some of them cross the line and start sleeping with each other while keeping secrets behind their backs. Mike becomes so obsessed with taking down a corrupt FBI agent that he covers up other crimes to keep it going and gets fatally sloppy: his quarry finds Mike’s gun and files and uncovers the identities of all the agents working the case. If that’s not enough, his betrayal of one particular member of the clubhouse results in brutal blowback.

Rated TV-MA for drug use, sexual situations and violence but no explicit sex or violence or language.

Also available on DVD and Blu-ray and on SVOD through Amazon Video, iTunes, GooglePlay, Vudu, and/or other services. Availability may vary by service.
Graceland: Season 1 [DVD]

Pingback: Stream On Demand|What to watch the week of Friday, May 29
Comments are closed.