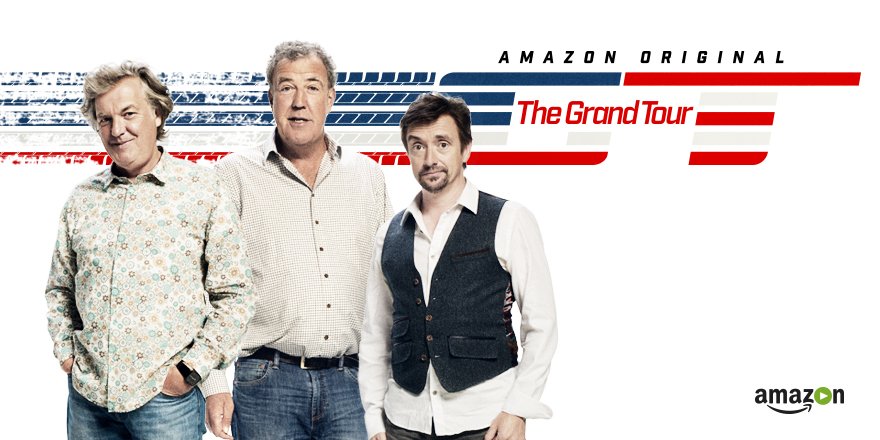 The Grand Tour: Season 1 – “Top Gear on steroids” is how critics are describing the first episode of the Amazon Original series starring Jeremy Clarkson, Richard Hammond, and James May, the former stars of the British series Top Gear. This new gearhead series sends the trio around the world in search of cars, speed, and automotive adventures with a much bigger budget, which they spend on lavish sequences.

“The opening segment of the first segment looks like it cost the GDP of a small country,” writes Allen St. John for Forbes. “It begins with Clarkson in a U.S. Airport, and ends with a cast of thousands in the desert in an impromptu “Burning Van” festival. Yes, the rest of the segment is a bit like that, with our hosts trying more than a bit too hard to be clever and self-deprecating…. Then at exactly the 20 minute mark, James May pulls up in a tractor trailer and gives us exactly what we’ve been waiting  for: A comparison test of the three most exciting cars on earth.”

This Amazon Original follows the old TV model: the series debuts today and a new episode arrives every Friday for the next couple of months.

Finding Dory sends Marlin and Nemo on a new adventure to help the memory-challenged Dory find her parents (PG). Reviewed on Stream On Demand here.

Also new: the action comedy Army Of One with Nicolas Cage and Russell Brand (R), the indie drama Cents about a middle-school math prodigy (not rated), and the award-winning French drama My King with Emanuelle Bercot and Vincent Cassel (not rated).

Available same day as select theaters nationwide are the action thrillers The Take with Idris Elba and Richard Madden (R) and Life on the Line with John Travolta and Kate Bosworth (R).

Paddington (2014), based on the British storybooks of a gentle talking bear with a taste for marmalade, was a modest hit in the U.S. but a smash in Great Britain. The cuddly bear is brought to life with CGI but otherwise a live action comedy with Nicole Kidman doing villain duty and a whimsical humor and a sweet disposition keeping it gently PG for mild toilet humor (Paddington has some trouble managing indoor plumbing).

The Coen Bros.’ Burn After Reading (2008) is an espionage farce starring George Clooney as a philandering Federal Marshall, John Malkovich as an incompetent CIA analyst, and Frances McDormand as a very determined fitness instructor (R). Reviewed on Stream On Demand here.

Foreign affairs: the French drama Divines (2016), a buddy film of two teenage girls navigating the criminal economy in the slums of Paris, won the Camera d’Or (for best first feature) at Cannes. Debuts in the U.S. exclusively on Netflix (not rated, subtitled)

More foreign arrivals: Cosmos (2015), a mix of intellectual banter and Marx Brothers madness from France, is the final film from Andrzej Zulawski. Also from France is the romantic drama Summertime (2015) and from Denmark comes a trilogy of “Department Q” murder mystery thrillers: Keeper of Lost Causes (2013), The Absent One (2014), and A Conspiracy of Faith (2016). All are subtitled and unrated.

Streaming TV: The British comedy Lovesick: Season 2 is one of the best shows you’ve never heard of, in part because it used to be called Scrotal Recall, a terrible title for a show with such a tender heart. It’s worth catching up with.

True stories: The Galapagos Affair: Satan Came to Eden (2013) is a real-life melodrama turned murder mystery set on a tropical island in the Galapagos in the 1930s (not rated). Also new are the non-fiction series Last Chance to See (2009) (reviewed on Stream On Demand here) and Stephen Fry in America (2008), both hosted by Stephen Fry, and Oliver Stone’s Untold History of the United States (2013).

The made-in-Oregon thriller Green Room (2015) features Anton Yelchin in one of his final screen performances and Patrick Stewart as a neo-Nazi leader (R).

More cult cinema: Hideo Nakata’s Dark Water (2002) is a ghost story that is both unnerving and poignant (PG-13). In Japanese with English subtitles, not rated. The Night Evelyn Came Out of the Grave (1971) and What Have You Done to Solange (1972) are two of the more interesting horror films to come out of Italy in the early 1970s. Both in Italian with English subtitles and rated R.

Streaming TV: James Norton is a priest with a knack for solving mysteries in Grantchester: Season 2, a British series set in the early 1950s. Also new: the royal family spoof The Royals: Season 2 and the animated adventure series Thunderbirds Are Go: Season 2.

The Divergent Series: Allegiant (2016), the third film in the young adult sci-fi series, sends Shailene Woodley and Theo James into the unexplored lands outside their walled city (PG-13).

All Def Comedy is a stand-up comedy special produced by Russell Simmons.

Close to the Enemy, a seven-part BBC mini-series set in the early Cold War atmosphere of post-World War II London, debuts in the U.S. on Acorn TV. New episodes available every Monday.