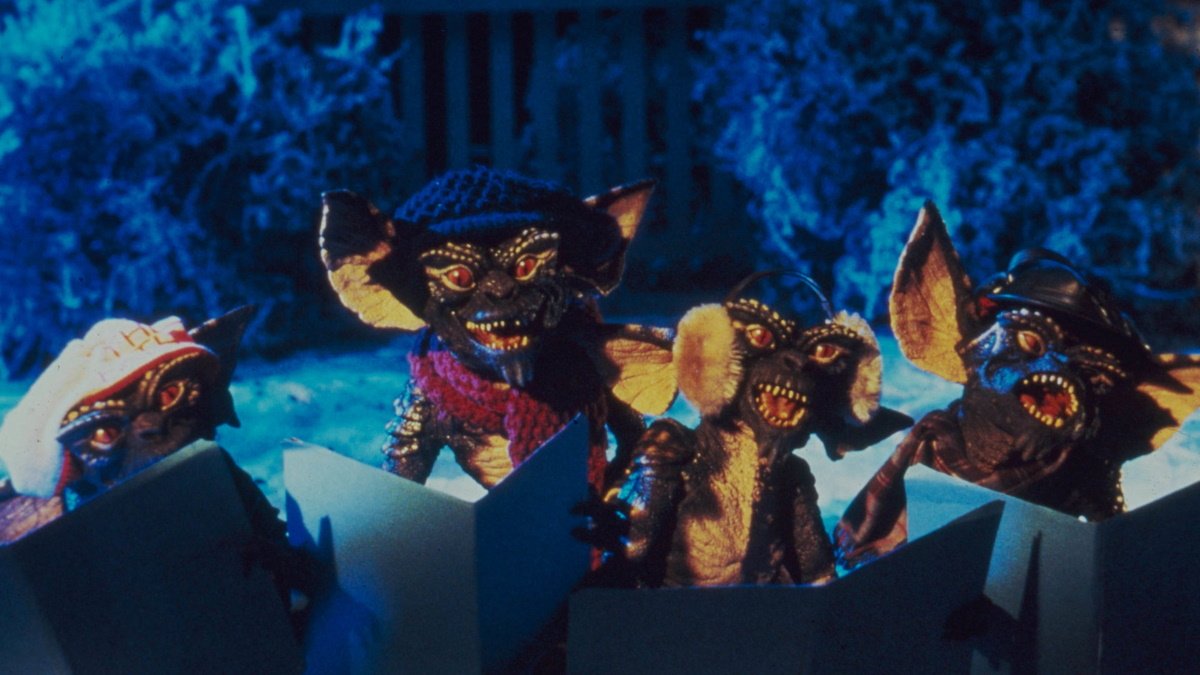 Joe Dante delves into the cute and the cuddly and finds the evil green monsters hiding inside in Gremlins (1984), a mix of Christmas comedy, monster movie, and very, very naughty children.

Zach Galligan is the ostensible hero Billy, a nice middle class kid in an almost impossibly storybook small town (think Norman Rockwell meets Frank Capra) who gets the best Christmas present ever. His dad (Hoyt Axton), a wacky inventor, finds a sweet-natured teddy bear of a creature called a mogwai in a Chinatown curios shop and brings it home for Billy, who names the adorable little thing Gizmo.

There’s also a list of dos and don’ts for the care and feeding of his new pet and adorable best friend. Those turn out to be pretty important, as we soon discover when an army of nasty little lizard-like creatures sprout like boils from the back of Gizmo and turn Dante’s picture-postcard version of Bedford Falls into a madhouse of mean-spirited practical jokes with fatal edges. And on Christmas, no less.

Produced by Steven Spielberg and written by Chris Columbus, it’s the dark side of E.T., a barbed fantasy about an invasion of malevolent creatures into suburbia. The gremlins are hyperactive, destructive bad kids yet for all their bullying and bad behavior, Dante gives them a kind of amoral innocence that turns to wonder when they watch Snow White and the Seven Dwarves. The rest of the time he simply kicks back and enjoys the creative mayhem.

A mix of puppetry and animatronics were used to create the gremlins. They come off as malevolent Muppets by way of Looney Tunes cartoon characters, id unleashed with a wicked creativity and a dark sense of humor. Movie buff Dante fills the film with all sorts of references and tributes but you don’t have to recognize any of it to enjoy the manic mischief of this twisted holiday comedy.

Phoebe Cates costars as Billy’s wrong-side-of-the-tracks girlfriend Kate, who already has issues with Christmas trauma, Polly Holiday is Mr. Potter and the Wicked Witch of the West rolled up into one nasty old lady, Keye Luke has a memorable turn as the proprietor of the curio shop, and of course Dante favorite Dick Miller gets a supporting role. The voice of Gizmo was provided by Howie Mandell.

Dante leans even harder into the looney humor and whimsy in the sequel Gremlins II: The New Batch (1990).

Rated PG but may be a little dark for young kids. It was released before the PG-13 rating was created.

The Blu-ray and DVD releases feature two commentary tracks (one by director Joe Dante with stars Zach Galligan, Phoebe Cates, Dick Miller, and Howie Mandell, the other by Dante with producer Michael Finnell and special effects artist Chris Walas), a “making of” documentary featurette, 10 minutes of cut scenes (with optional commentary), and galleries of stills and storyboards.