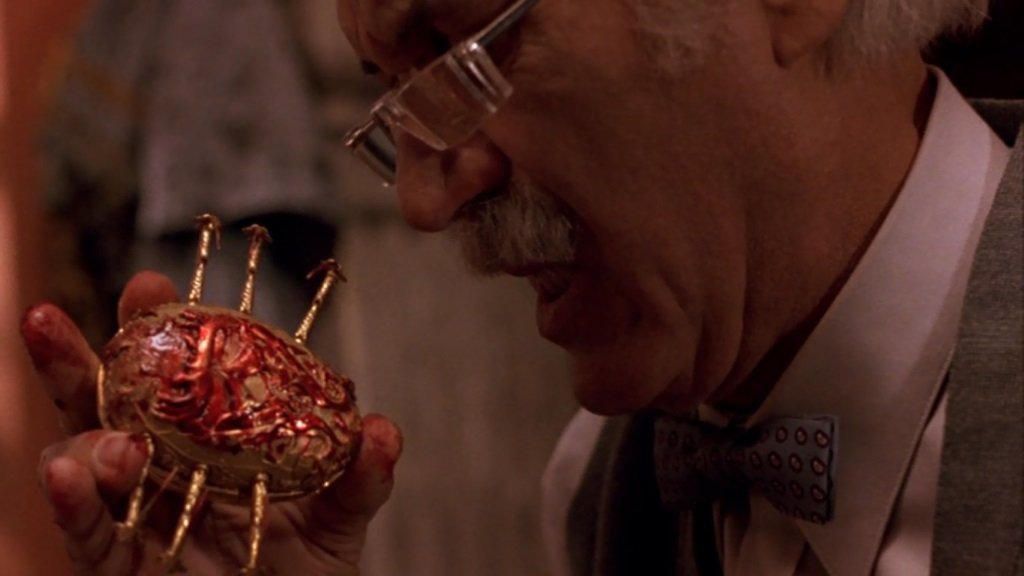 Cronos (Mexico, 1993, R, with subtitles), the feature debut of Mexican filmmaker Guillermo del Toro, is an alchemic twist on vampire lore and the costs of eternal life. It’s also the first expression of the budding genre master’s affinity for cinema fantasy and horror as a crucible for exploring humanity.

Federico Luppi stars as Jesus, a curio shop owner and doting grandfather to an adorable girl, who stumbles upon a clockwork device created by a 16th Century alchemist. The queasy mix of insect-like mechanics and organic organs looks like a Quay Brothers creation and he watches in horror as claw-like spikes unfold and drives themselves into his skin, emerging from the experience energized, refreshed, as if this thing gave him back his youth. Later he learns the price of his youth: an insatiable craving for blood, a physical transformation, a whole new meaning to the idea of sun burn, not to mention a Howard Hughes-like millionaire recluse sends a henchman nephew, a hulking American hoodlum named Angel (Ron Perlman), to retrieve the immortality device.

As in Kathryn Bigelow’s brilliant Near Dark (1987), another reinvention of the genre, the word vampire is never uttered and though parts of the familiar lore arise, there is no one to rattle off the explanations of the transformation. He has to stumble across these as new experiences and learn on the way, with the support of his adoring young granddaughter, Aurora, who is wary of his addiction to the device but stands by him unconditionally. Just as Angel becomes his devil, Aurora is his angel: innocent, sweet, always dressed in white and always protective of the old man who will do anything to guard her from evil.

It’s part melodrama, part morality play and part thriller, more Dorian Gray than Bram Stoker and infused with a heady alchemic brew of ancient science, supernatural shadows, mutant organisms, demented villains driven by a greed for youth, and one man’s struggle for his soul. Yet it is the emotional connection between Jesus, tempted by this fountain of youth, and his granddaughter Aurora, devoted in the face of mystery and dark magic, that grounds the story.

Guillermo del Toro wrote the script as a young man and spent years in the industry, as a TV director and a special effects artist, working to get his chance to direct it. The wait surely contributed to the richness of the film. While the narrative itself is fairly direct, the details are rich, clever and darkly witty (his sudden revival in a funeral home, moments away from cremation, is a hilarious sequence of silent comedy in a surreal situation capped by one of the funniest sight gags you’ll ever see in a horror movie).

It also was his first collaboration with director of photography Guillermo Nararro, who went on to win the Academy Award for shooting del Toro’s Pan’s Labyrinth, and actor Ron Perlman, who took a chance on the first time director and was cast years later with the title role in del Toro’s two Hellboy films. Their contributions are essential to the success of the film. While del Toro certainly developed as a director with time, Cronos is a marvelous debut: cool, creepy and surprising, tempered with a clever gallows humor and anchored by a passion for life and love.

Not rated, in Spanish with English subtitles

, iTunes, GooglePlay and/or other services. Availability may vary by service.
Cronos (The Criterion Collection) [Blu-ray]

Criterion’s DVD and the Blu-ray debut. Features the two commentary tracks from the 2003 DVD release—one by director Guillermo Del Toro (in English) and one by producers Alejandro Springal, Bertha Navarro (in Spanish with optional English subtitles) and Arthur H. Gorson (in English)—and the 5 minute archival interview featurette “Making Cronos With Federico Luppi” (in Spanish with English subtitles) illustrated with behind the scenes footage and film clips, and completes the set with new supplements. In a new interview with Guillermo del Toro, who is both passionate and articulate, he is frank about what he thinks didn’t work in the film (and how he learned from it) and describes his feature debut as his only true “lapsed Catholic movie.” There are also new interviews (circa 2009) with cinematographer Guillermo Navarro and star Ron Perlman (who del Toro subsequently cast in numerous films, including the starring role in the Hellboy features) and “Welcome to Bleak House,” a ten-minute video tour guided tour through del Toro’s home, his way of introducing us to his influences, the closest thing to letting us into his mind, he explains, plus “Geometria,” a 1987 unreleased short horror film finished by del Toro for this release.