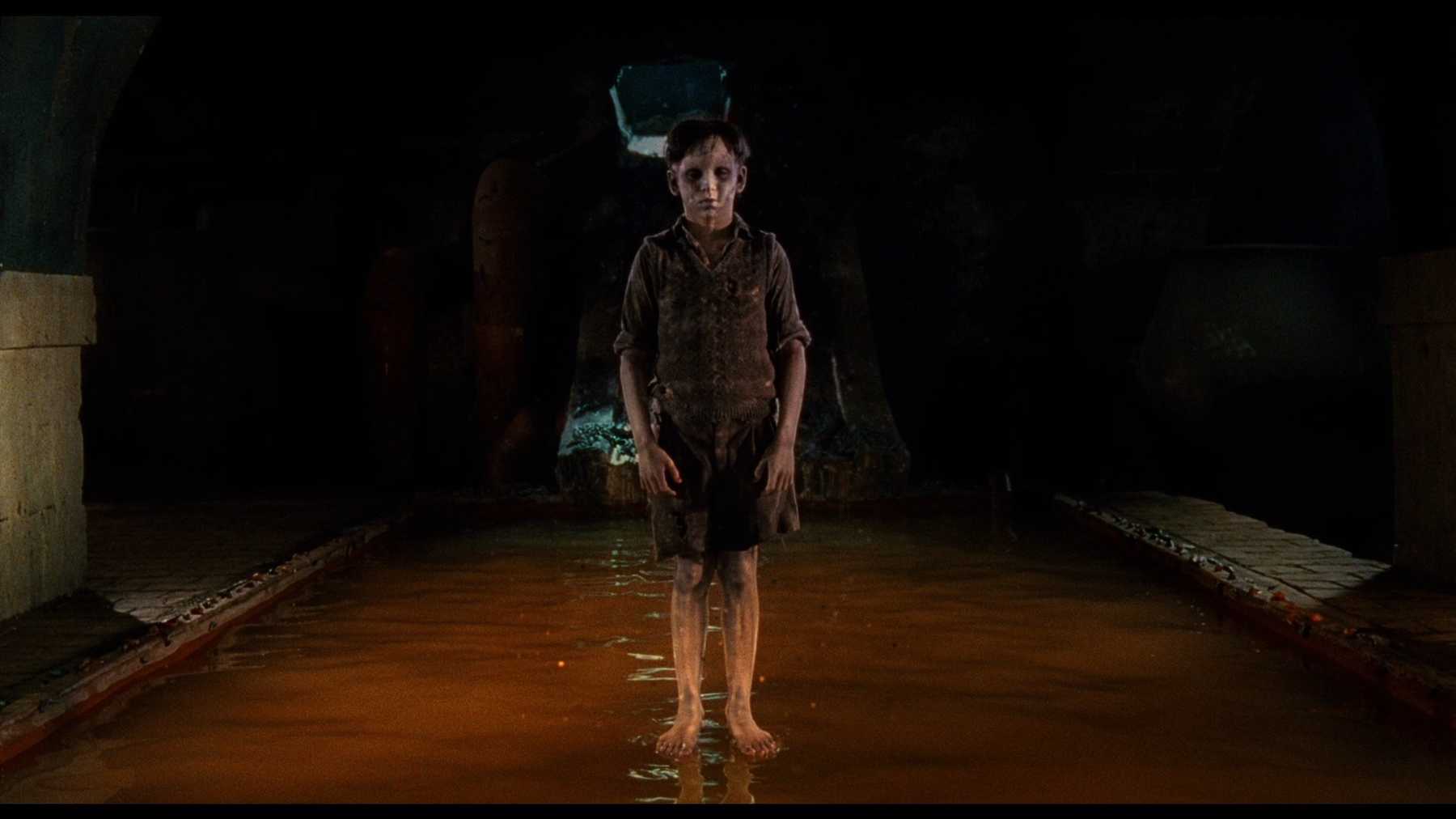 Set in the collapsing days of the Spanish Civil War, in a makeshift orphanage where the sons of fallen Republican soldiers are protected by a war widow (Marisa Paredes) and poet/doctor (Federico Luppi), ten year old Carlos (Fernando Tielve) grows up fast amidst the fear and anger and apprehension as the Fascist army approaches and thieves converge to search for hidden gold.

Del Toro’s best films are richly imaginative, filled with color and packed with intricate detail, but here he strips the images to stark, bold, intense visions: an isolated villa baked clay red by the dry yellow sun of the Spanish desert, an unexploded bomb teetering in mid-fall in the courtyard, the bone-white phantom of a boy floats in the air with a red wisp oozing from his scalp like a cloud and a halo of bubbles suspended around his head.

The ghost story, eerie as it is, becomes an incidental yet unsettling grace note to the here-and-now dangers of the advancing Fascist troops and the fatal drive of gold-fever. The Devil’s Backbone is resolutely grounded in the horrors of real life—war, abandonment, betrayal, greed, and murder—and Del Toro cuts to the core of violence in visceral cinematic punches and haunting images without resorting to gory details. As the evil human rot seeps through the villa’s protective walls, the boys are forced to deal with the mercenary world on their own. He finds tenderness and sacrifice and even innocence amidst the savagery.

Criterion presents a special edition on Blu-ray and DVD featuring a 2K digital film restoration, approved by director Guillermo del Toro and cinematographer Guillermo Navarro. It carries over the commentary by director Guillermo del Toro from the 2004 DVD release as well as a video introduction by the director, four deleted scenes with optional director commentary, six video pieces comparing the thumbnail sketches and storyboards to finished scenes, and the 27-minute Spanish-language documentary “Que Es Un Fantasma?: The Making of The Devil’s Backbone” (with English subtitles).

New to this edition are two interviews with Del Toro about the process of creating the ghost Santi and the drawings and designs made in preparation for the film, a 2010 interview with del Toro about the genre and its influence on his work, a new video interview with Spanish Civil War scholar Sebastian Faber, and “Director’s Notebook,” an interactive supplement featuring drawings and handwritten notes created by del Toro as he prepared the film with accompanying interview clips with the filmmaker, plus a booklet with an essay by critic Mark Kermode. That striking cover, by the way, is by graphic artist and “Hellboy” creator Mike Mignola.