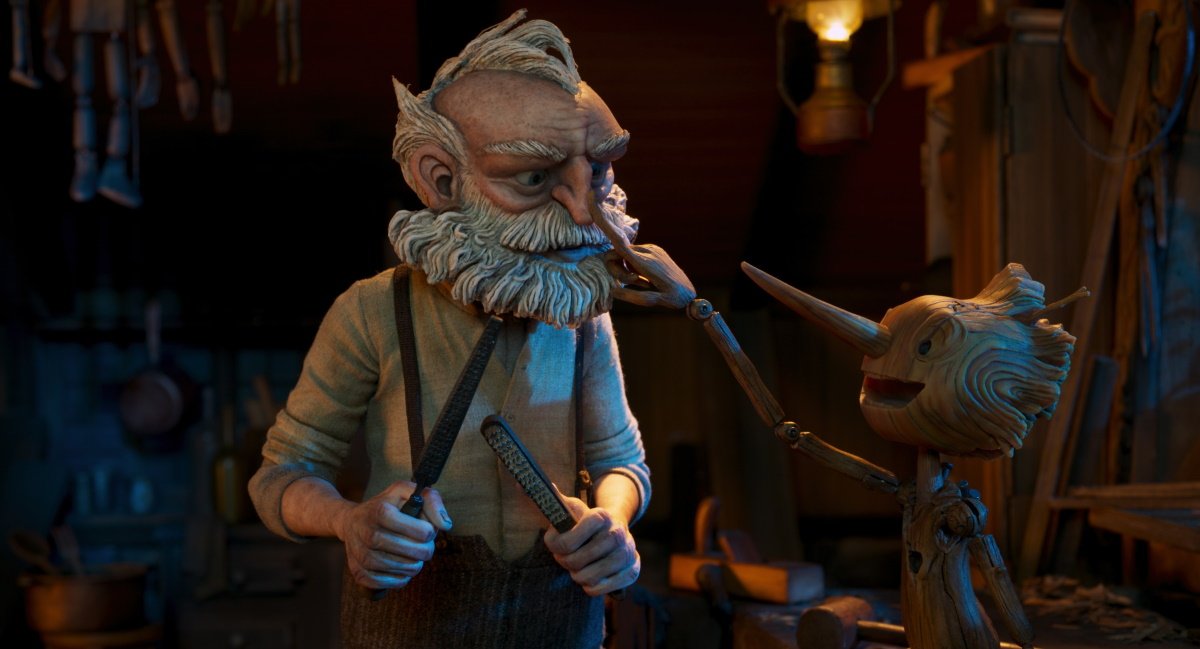 For “Guillermo del Toro’s Pinocchio” (2022, PG), the Oscar-winning director teams up with stop-motion filmmaker Mark Gustafson to bring his dream project to the screen as an animated musical. He sets his vision in World War II Italy, where the crudely-carved puppet (voiced by Gregory Mann) sets out on a dangerous journey to become a real boy and, true to his nature, brings darker themes and macabre touches to the odyssey. Features the voices of Ewan McGregor, David Bradley, Gregory Mann, Cate Blanchett, and Tilda Swinton. (Netflix)

David O. Russell swings for the fences in “Amsterdam” (2022, R), an overstuffed mix of conspiracy thriller, screwball comedy, and social commentary set in 1930s America. Christian Bale and John David Washington star as World War I veterans and best friends who are framed for murder and get tangled in a Fascist conspiracy and Margot Robbie joins their detective escapade across New York City. It’s messy and busy as it fictionalizes a piece of forgotten American history, weaves in commentary on the way wounded soldiers were abandoned by the government, and drives it with a rapid-fire pace and an offbeat sense of humor. (HBO Max, also on VOD)

Can you believe it took this long for a major American studio to make a romantic comedy about two gay men? Billy Eichern cowrites and stars in “Bros” (2022, R) as a high-strung 40-something who falls for a free-wheeling younger guy (Luke Macfarlane), opposites who stumble toward love with all the same anxieties and insecurities of classic Hollywood romcom couples. Nicholas Stoller directs. (Peacock)

Will Smith stars as a black man who escapes enslavement and battles bounty hunters and swamps to gain his freedom in 1863 Louisiana in “Emancipation” (2022, R). Antoine Fuqua directs the historical drama, bringing an unblinking portrait of the horrors of slavery to the film before the propulsive flight from enslavement. (Apple TV+)

Based on the Chief Inspector Gamache books by Louise Penny, “Three Pines: Season 1” (2022, TV-14) stars Alfred Molina as Quebec police investigator who is exiled to a small community for digging into unsolved disappearances of young Indigenous women in the province. It plays like a Canadian version of a British mystery procedural, with four mysteries over eight episodes. New mysteries on Fridays. (Prime Video)

The third and final season of “His Dark Materials” (TV-14), based on the final novel in Philip Pullman’s award-winning trilogy, sends its adolescent heroes (Dafne Keen and Amir Wilson) on a mission to save their world. New episodes on Mondays. (HBO Max)

International pick: “Decision to Leave” (South Korea, 2022, with subtitles), directed by Park Chan-wook, is a slow-burn mystery about an obsessive police detective who falls in love with his prime suspect. It’s the official submission of South Korea for the Academy Awards. (MUBI)

The love lives of two couples are upended when gifts are mixed up in “Something from Tiffany’s” (2022, PG) starring Zoey Deutch and Shay Mitchell. (Prime Video)

“Triangle of Sadness” (2022, R, with subtitles), Ruben Östlund’s scabrous satire of the rich and privileged, won the Palme d’Or at Cannes.

Aubrey Plaza stars as a desperate young woman who discovers a gift for credit card theft in “Emily the Criminal” (2022, R).

International passport: A mail carrier is inspired by poet Pablo Neruto in “Burning Patience“ (Chile, 2022, TV-14, with subtitles), a remake of the 1994 film “The Postman,” and a private detective checks himself into psychiatric hospital to investigate a patient’s mysterious death in “God’s Crooked Lines“ (Spain, 2022, TV-MA, with subtitles).

Animation: based on the popular webtoon, “Lookism: Season 1“ (South Korea, TV-MA) follows a high school outcast who wakes up to find he can switch between two bodies that are polar opposites in appearance.

The moody horror film “The Night House“ (2021, R) stars Rebecca Hall as a woman who discovers disturbing secrets after her husband’s sudden death.

Reality TV: Taye Diggs hosts “Back in the Groove: Season 1“ (TV-MA), a dating show with single women in their 40s looking for love with men half their age.

International TV: the supernatural horror series “Connect: Season 1“ (South Korea, not rated, with subtitles), about a young man can still see out of an eye that is removed by organ harvesters and implanted in a serial killer, is directed by cult Japanese filmmaker Takashi Miike.

The stories of three women seeking abortions make up “If These Walls Could Talk“ (1996, R), directed by Cher and Nancy Savoca and starring Demi Moore, Sissy Spacek, and Cher. The HBO original movie makes its streaming debut.

“Night at the Museum: Kahmunrah Rises Again“ (2022, PG), an animated sequel to the hit fantasy series, finds a new generation discovering the magic after hours.

The concert documentary “Idina Menzel: Which Way to the Stage?“ (2022, TV-14) chronicles the singer’s road to playing Madison Square Garden.

The heirs to a black-owned cosmetics empire in the U.K. battle for dominance when the patriarch dies in “Riches: Season 1“ (2022, TV-14).

International TV: an honest prosecutor who is fired after he’s accused of being a Mafioso turns to a life of crime in the dark comedy “The Bad Guy: Season 1“ (Italy, 2022, TV-MA, with subtitles).

“The Check Up with Dr. David Agus: Season 1“ (not rated) is a health talk show with celebrities discussing their health issues.

A robot Santa goes haywire and embarks on a killing spree in “Christmas Bloody Christmas“ (2022, not rated). (AMC+ and Shudder)

“Midsomer Murders: 25 Years of Mayhem” (2022, not rated) looks back on the beloved British mystery series debuts a week before the new season begins.

Filmmaker Marco Bellocchio looks back on the disappearance of his twin brother over 50 years ago in the personal documentary “Marx Can Wait“ (Italy, 2021, with subtitles).

“Three Films by Mai Zetterling” spotlights the taboo-breaking sixties cinema of the pioneering Swedish filmmaker, including “Loving Couples“ (1964) with Harriet Andersson and “Night Games“ (1966) with Ingrid Thulin (all from Sweden, with subtitles).

A teenager inhabits the body of his babysitter in “Homebody“ (2022, TV-14), a body-swap comedy with a queer twist.