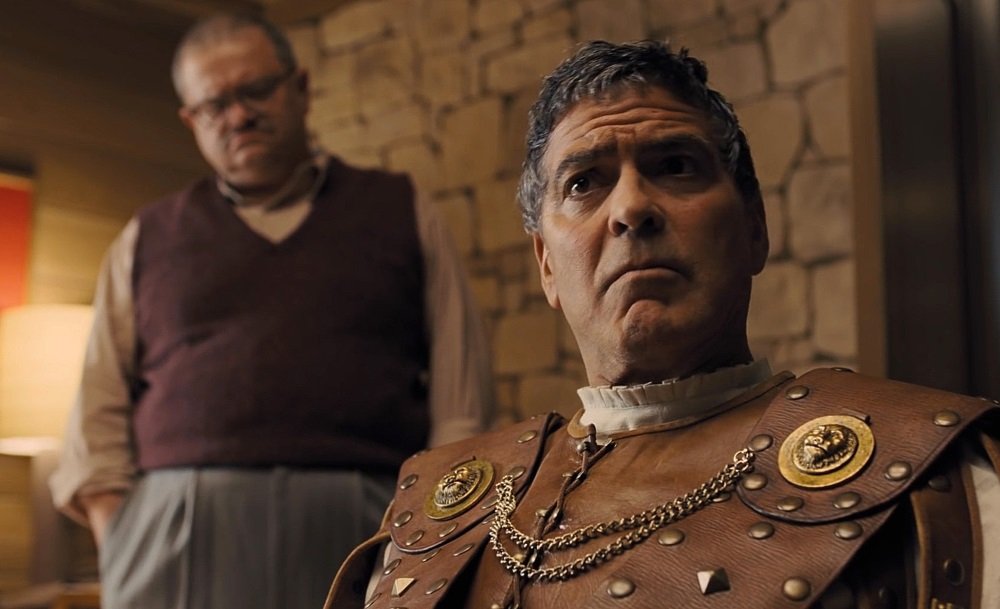 Hail, Caesar! (2015), the Coen Bros.’s sly lampoon of 1950s Hollywood, is an affectionate and satirical tribute to studio filmmaking and a wittily skewed comedy of cultural politics in early 1950s America, the beginning of the end of the studio era.

Set at the fictional Capitol Pictures, an MGM-like studio, and centered on Eddie Mannix (Josh Brolin), the studio’s head of production who shares a name and a job but little else with the real-life MGM executive, the film stirs Hollywood gossip, studio politics, Tinseltown history and culture, and marvelous recreations of bygone moviemaking magic through 24 hours in the life of Mannix.

The real life man was rumored to be a studio hitman who wasn’t above murder to kill a story. Brolin’s Mannix, by contrast, is a straight shooter, devoted family man, and good Catholic boy who hits the confession twice a day to grapple with his guilt over what he does to look after his flock. He’s diplomat, stern father, public relations master, power brother, peacemaker, and hatchet man, keeping the dirty laundry of his stars from being aired in public by any means necessary. And where less savvy filmmakers might portray him as a crude businessman at war with the artistic ambitions of his filmmakers, Joel and Ethan Coen show that he has good instincts when it comes to moviemaking as well as practical solutions to production challenges. This Mannix is Hollywood’s answer to a Messiah in the promised land of big screen dreams and tawdry lives, the tarnished angel in the kingdom where there are more stars than in heavens.

There’s a biblical epic that runs into trouble when its lunkish star (George Clooney, nicely playing on his charisma) is kidnapped by “The Future,” an unmarried aquatic star (Scarlett Johansson) in the family way, a sweet, guileless singing cowboy (Alden Ehrenreich) suddenly promoted from B-westerns to a sophisticated drawing room comedy (where his drawl stumbles over the cocktail dialogue), an all-American hoofer (Channing Tatum) in a singing sailor picture who keeps a secret life under wraps, and twin sister gossip columnists (Tilda Swinton) on the trail of any and all of these stories.

The Coen mix of subtle wit and broad slapstick is all over the film, which hopscotches across stories and soundstages at a snappy pace, and they poke fun at everything except the joy of movies. The glory of Hail, Caesar!, a Hollywood lampoon from a team of lifelong independents, is how it appreciates the effectiveness and efficiency of the old studio system of the early 1950s in making movies and sometimes making magic.

Between the marvelous recreations of movie genres there are moments rooted in insider rumor and Hollywood lore that may confound viewers less steeped in movie trivia, but ultimately there is something for every lover of classic movies and moviemaking culture. Rarely has a satire embraced the object of its caricature with such love and affection.

, iTunes, and other VOD portals. The Blu-ray and DVD editions include four featurettes. The Blu-ray also features bonus DVD and Ultraviolet Digital HD copies of the film.