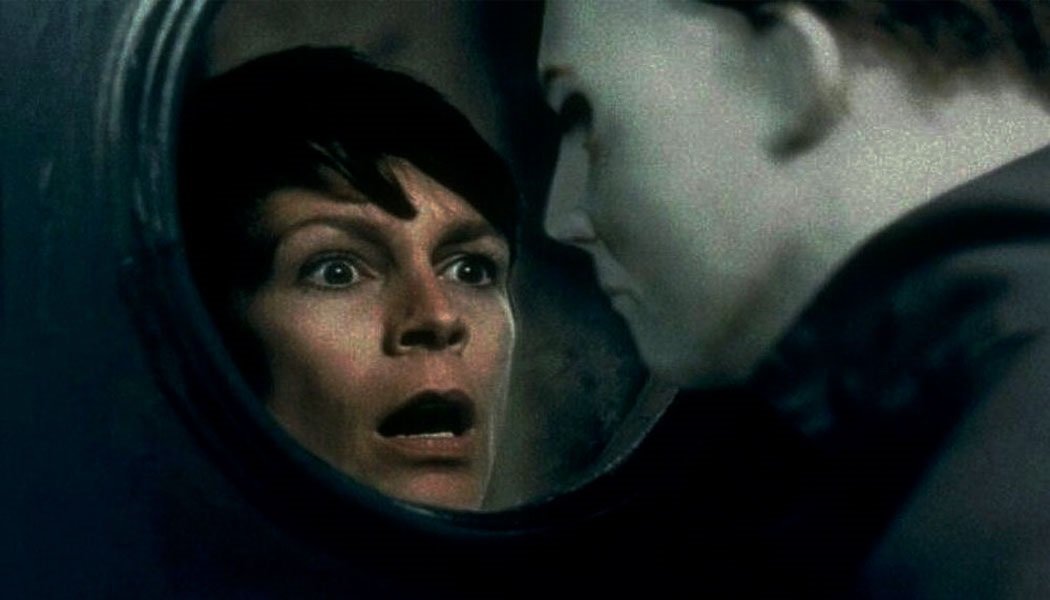 Sweeping Halloweens 3-6 under the carpet, H20 picks up 20 years after the 1981 sequel. Jamie Lee Curtis’s Laurie Strode, survivor of the now legendary Haddonfield Halloween massacre, has faked her death and created a new persona as California private school headmistress and single mom Keri Tate. She saw her homicidal brother Michael Myers burn ostensibly to death but she’s also seen too much to fully believe he’s dead (lesson learned: “You can’t kill the boogeyman”). Even in hiding she can’t escape the horror; she sees Michael’s masked face practically every time she turns around and wakes up screaming from terrifying nightmares, so she’s retreated to the bottle.

Meanwhile the boogeyman is back. Michael has discovered Laurie’s secret, killed a few people for practice, and hit the road for California and an overdue family reunion. Miner sets the story quite nicely, not overplaying the alcoholic angle, putting in his time with the teenage fodder, and finally clearing the campus with a timely weekend-long field trip (on Halloween weekend?). Curtis invests Laurie with cutting humor and a hollow exuberance, putting on a good show for her son John (Josh Hartnett), lover Will (Adam Arkin), and nosy “let me be maternal” secretary Norma (a cute but brief tongue-in-cheek appearance by Curtis’s real life mom and Psycho scream queen Janet Leigh).

The exposition of the first half isn’t bad and feeds enough information for any Halloween virgin to follow along quite nicely, but it’s all set-up. The pay-off comes in the second half, a tight, driving rollercoaster of classic stalk and slash thrills. The clichés are all here: half-lit hallways, mysteriously creaking doors, lights that don’t work, dead phone lines, the ambiance of doom. The Michael Myers juggernaut is a mix of supernatural force and evil genius; 15 years in a sanitarium and he somehow knows how to drive a car, cut off communications, and find his way around labyrinthine buildings and campus pathways like he was born there.

Sure it’s a little silly; it’s a slasher movie about a knife wielding homicidal maniac who won’t stay dead. And there are enough in-jokes and references to keep avid thriller junkies entertained (from clips of Plan 9 From Outer Space and Scream II to Leigh’s exit in her Psycho-mobile Ford Fairlane) while zipping by quickly enough not to distract the uninitiated. But once the rampage starts that doesn’t matter. Laurie/Keri tosses away her alcoholic crutch and meets the horror head on as Curtis invests her with a convincing mix of terror, desperation, and finally empowerment. Miner revives the widescreen Panavision frame from the original Halloween and creates his frights from long takes and lurking figures (generally Michael) in the background, never letting the pace slacken. And in the satisfying final minutes Curtis gives us a horror movie hero that finally listens to the audience. I find it refreshing.

Jamie Lee Curtis returned once more to the franchise for David Gordon Green’s 2018 sequel simply titled Halloween, once again sweeping all the previous sequels away. This is the one other sequel worth keeping around.