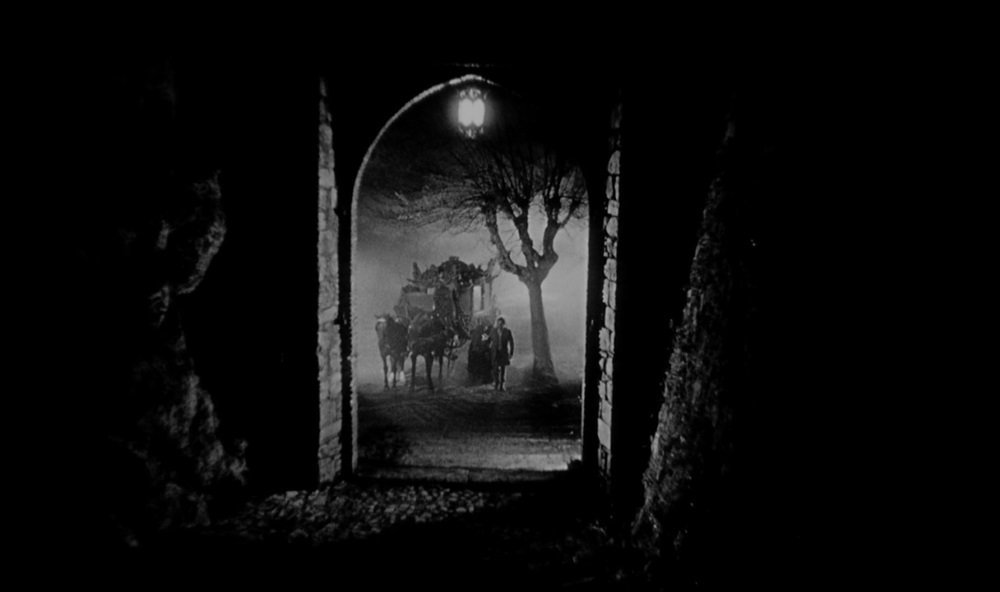 Mario Bava essentially created the genre of baroque horror known as “giallo,” a distinctly Italian twist on stalk and kill horror film. Under his direction, Grand Guignol gore is transformed into lush, visually elegant cinematic spectacle, a waking nightmare with the poetic grace of a musical and a demented edge of sexual perversity.

After rising through the ranks of the Italian film industry as a cameramen (Bava disdained the term “cinematographer”) and special effects artist, contributing to Pietro Francisci’s genre-defining muscleman movies Hercules and Hercules Unchained and completing (uncredited) Riccardo Freda’s minor horror classic I Vampiri, Bava made his official directorial debut at age 46 with an adaptation of Nikolai Gogol’s short story “Viy.” The film was called The Mask of Satan, which was renamed Black Sunday (1961) for U.S. release.

From the opening frames, Bava proved that he knew how grab an audience’s attention. Barbara Steele, her eyes glaring hate even as her face registers terror, is bound to a stake, spitting curses with hellfire to the robed and masked judges who pronounce her death sentence. A spiked mask is slowly placed over her face and a massive wooden mallet pounds the iron mask with a startling finality as the credits explode in fire (this final shot was excised from the American release). Even as the film eases into an eerie gothic atmosphere of a ghost story, where centuries later the corpse is revived by the innocent descendant (also played by Steele) with a single drop of blood, Bava never eases up on the tension. His vivid style – gliding camerawork, dramatic lighting, striking compositions, and atmospheric sets cobbled together from limited resources – set the standard for Italian gothic horror, and his magnificent photography of the weirdly beautiful Steele made her an icon of the genre. Equally good as the devilishly wicked witch, with eyes blazing and evil smile set off by feral teeth, and the haunted innocent, she plays both in this moody, macabre cult classic of cruelty.

Black Sunday established the foundations of the giallo — sex, sadism, and high style — and he spent his career turning this distinctly Italian twist on stalk and kill horror genre into an elegant dance of death with a mix of poetic, haunting beauty, grand guignol gore, and a bent of sexual perversity.

Bava brought Italian horror it out of the gothic world of black and white and into the modern world of luscious, lurid color with the vivid, oversaturated color palette of Black Sabbath (1964), a trilogy of terror hosted by Boris Karloff. It was trimmed, toned down, rescored, rearranged, and in the case of one segment butchered beyond recognition for American release.

Amazon offers the American version only but Fandor features the original Italian cut, which was restored in the early 2000s. While it’s odd to watch host/co-star Boris Karloff speak with some else’s Italian voice, it’s literally a new film. The correctly ordered stories now build from the early, ornate giallo thriller The Telephone to the gorgeous and eerie vampire tale The Wurdulak (with Karloff as an uncharacteristically demonic patriarch) to the chilling ghost story The Drop of Water, a masterpiece of shiver-inducing imagery haunted by the piercing dead eyes of the restless corpse, with a playful coda to remind us that it’s only a movie. Bava sighted this as his favorite of his films.

Kill Baby… Kill (1966) harkens back to the gothic style with a delirious colorscape. Bava floods the streets of his turn of the century Italian village with red, blue and green light, a surreal day-for-night look that only enhances the otherworldly atmosphere of the eerie gothic ghost story with a homicidal edge. This fanciful nocturnal world becomes the stage for virtual pageants of death in which the victims become tortured puppets forced to murder themselves by a malevolent spirit. The murders are grotesque and sometimes grueling, but not gory (this is before his shift to more sadistic slasher style pictures), and he manages to bring a chill to every appearance by the spooky little girl who is death, a creepy vision in white whose giggles become chilling as she pulls the strings on her victims. This vision surely inspired Federico Fellini’s chapter of Spirits of the Dead. (Amazon Prime only, not on Fandor.)

With Bay of Blood (1971) (aka Twitch of the Death Nerve), Bava takes a harder, more coldly brutal approach to the gory spectacle. Dubbed the godfather of the modern slasher genre (a dubious honor), Bava’s gruesome horror picture is like Agatha Christie’s Ten Little Indians set free of logic. The cascade of murders isn’t so much a campaign as a competition, the prize being the oceanfront land left by the countess (memorably and brutally killed in the first scene). It’s all rather confusing and mostly an excuse for a series of stylish but gory murders, notably a couple in coitus speared clean through (an effect recreated in the original Friday the 13th) and a beheading punctuating with a close-up of the spewing stump, but even that won’t prepare you for the coldly shocking coda. The proto-slasher picture is for fans of the genre only, but it is one of the best of its kind.

The maddest of Bava’s cinematic dreamscapes is Lisa and the Devil (1973). At first glance is might look like a typically lush Bava shocker but there’s something much more sinister under the surface. Sardonic, lollipop sucking butler Telly Savalas manipulates his own behind-the-scenes psychodrama for the benefit of innocent American Elke Sommer, and his motivations – as well as his identity – become part of the game. It was a passion project for Bava and that passion can be seen in every exquisitely composed, deliriously surreal image. Mixing slasher movie and ghost story conventions in a puzzle box of a script full of devilish mindgames, Bava drops the bottom out of genre expectations and creates a genuinely surreal nightmare horror film.

When the lovely but uncommercial dream shocker proved unreleasable in the US, new scenes were shot with Robert Alda as a priest exorcising the devil in Miss Sommer and The House Of Exorcism was clumsily cobbled together from it, a bizarre mess that nonetheless features a couple of delirious new scenes.