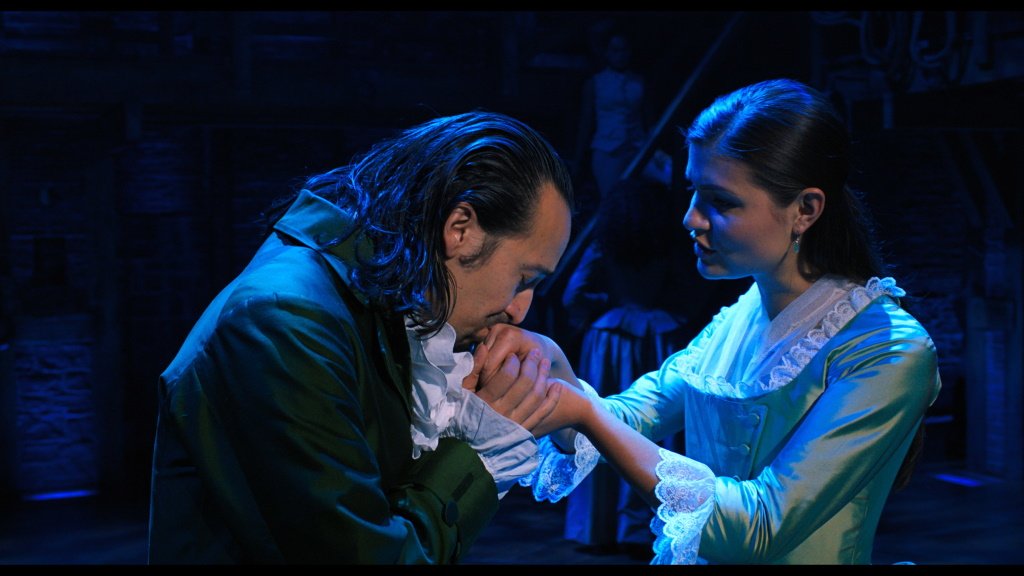 Celebrate July 4 with Lin-Manuel Miranda’s “Hamilton” (2020, PG-13), a filmed version of the Tony- and Pulitzer-winning Broadway phenomenon. The film was shot in 2016 with the original cast in front of a live audience over two performances, and the cast performed a few key numbers exclusively for cameras to allow for even more intimate shooting. Miranda plays Hamilton, the Jamaican-born bastard son who became one of America’s founding fathers, with Daveed Diggs as Thomas Jefferson, Phillipa Soo as Eliza Hamilton, Leslie Odom Jr. as Aaron Burr, and Jonathan Groff as King George. The color-blind casting is not just refreshing, it’s a reminder that the country was founded by immigrants.

The film was originally slated for theatrical release by Disney to give audiences a large-than-life big screen experience. But with Covid upending plans, they’ve chosen to give home audiences the best seat in the house for this landmark production on Disney+.

The limited series “I’ll Be Gone in the Dark” (2020, TV-MA) takes a different approach to the true crime documentary, focusing on author Michelle McNamara’s obsessive investigation into the Golden State Killer and giving voice to the survivors. New episodes each Sunday (HBO Max, all HBO platforms).

Kid stuff: the new small screen version of “The Baby-Sitters Club” (TV-Y), based on the popular series of books by Ann M. Martin and updated to 2020, tells the stories of teenage girls in their high school years with respect for the characters and its young target audience. Alicia Silverstone provides the adult supervision. 10 episodes (Netflix).

“Mr. Jones” (2019, not rated) tells the story of the journalist (James Norton) who broke the story of the Russian famine to the rest of the world. Vanessa Kirby and Peter Sarsgaard costar in the film directed by Agnieszka Holland. Also new:

Debuting directly to VOD is the drama “The Truth” (France, 2019, PG, with subtitles) by Japanese filmmaker Hirokazu Koreeda with Catherine Deneuve, Juliette Binoche, and Ethan Hawke, and Afghanistan war drama “The Outpost” (2020, R) with Scott Eastwood and Orlando Bloom.

In the young adult fantasy series “Warrior Nun” (not rated), an orphaned teenager wakes up in a morgue finds herself imbued with the supernatural powers of… well, you read the title.

The third and final season of the tragic time-travel thriller “Dark” (Germany, TV-MA, with subtitles) adds even more layers to the densely-woven narrative before bringing all the stories—the touching personal journeys and the epic overarching struggle over fate—to a satisfying close.

“Homemade” (2020) is an anthology of stories of life in the Covid-19 era from filmmakers Maggie Gyllenhaal, Pablo Larraín, Ladj Ly, David Mackenzie, Rachel Morrison, and Paolo Sorrentino, among others.

More streaming TV: a reboot of the non-fiction series “Unsolved Mysteries” (not rated);

The second season of the action thriller “Hanna: Season 2” (TV-MA) follows the teenage super soldier as she’s trained to become a covert assassin.

Brad Bird made his live-action directing debut with “Mission: Impossible – Ghost Protocol” (2011), the fourth installment of the Tom Cruise action movie series, and one of the best (Prime Video and Hulu)

International cinema: “The Whistlers” (Romania, 2020, not rated, with subtitles), a crime thriller with a streak of black comedy, arrives from acclaimed Romanian filmmaker Corneliu Porumboiu.

True stories: “I Am Not Your Negro” (2016, PG-13), a portrait of the life and career of James Baldwin, earned an Oscar nomination for best documentary.

Cult: sexploitation maverick Russ Meyer made his Hollywood studio debut with “Beyond the Valley of the Dolls” (1970, NC-17), a wild romp co-written by film critic Roger Ebert.

The documentary “Welcome to Chechnya” (2020, TV-MA) follows the efforts of gay rights activists in Russia.

A police detective grapples with a love triangle involving his wife and their best friend while trying to solve a series of murders in “The Sommerdahl Murders: Series 1” (Denmark, not rated, with subtitles).

Jean-Pierre and Luc Dardenne won the best director prize at Cannes for “Young Ahmed” (Belgium, 2019, not rated, with subtitles), a drama about a Belgian teenager is swayed by Islamic extremists. It makes its streaming premiere on Criterion Channel with an introduction by film historian Godfrey Cheshire. Also new: