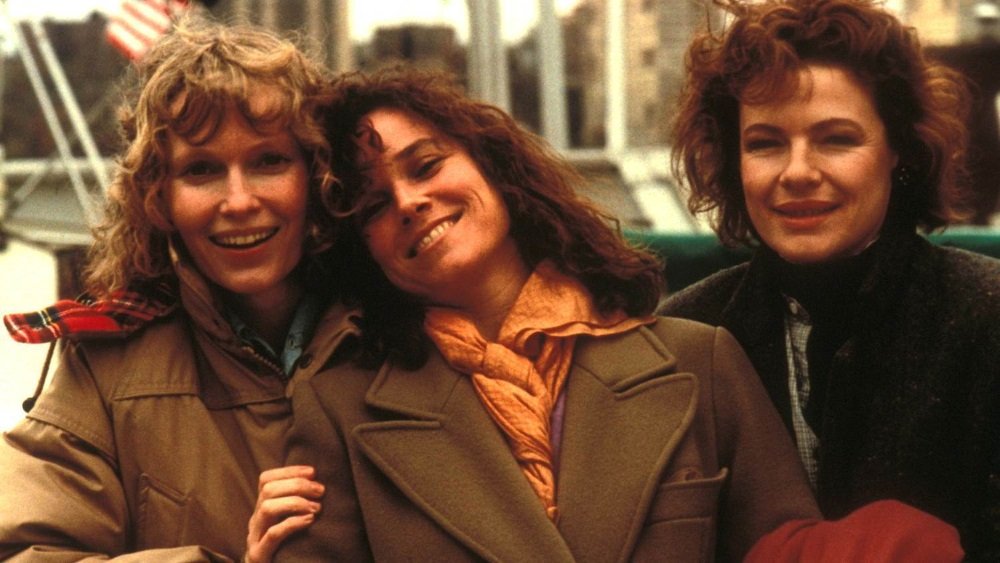 Hannah and Her Sisters (1986), Woody Allen’s biggest success of the eighties and his most popular film since Annie Hall, returns the director / writer to the same general territory of modern life and the challenges of sustaining romantic relationships, but this time within the context of family.

Mia Farrow takes the title role of Hannah with Barbara Hershey and Dianne Wiest as her sisters in a tightly-knit family presided over by often bickering parents Maureen O’Sullivan (Farrow’s real-life mother) and Lloyd Nolan. Michael Caine, Max von Sydow, and Woody Allen are the men in their lives. As with most of Allen’s characters, they are all affluent and intellectually and artistically inclined, from the retired actor parents to struggling actress Wiest, a genial, nervous neurotic who could be Allen’s female counterpart. The bittersweet story is a superb balance of human drama and Allen’s brand of neurotic comedy (most of it supplied by Allen’s supporting performance as he goes searching for God through various religions) with a warmth not always seen in a lot his films.

Playful, affectionate, and very funny, it’s one of Allen’s most affirming comedies, a lovely celebration of true romance and Allen’s belief that the power of laughter can save the human soul.

It won Academy awards for supporting performances by Michael Caine and Dianne Wiest and for Allen’s original screenplay, and was nominated for editing, art direction, and best picture. Allen won the BAFTA for best picture and director.

Add to My Watchlist on Amazon Prime Video or stream free on Hoopla, which is available through most public and college library systems.

Also on disc and on SVOD through Amazon Video, iTunes, GooglePlay, Vudu and/or other services. Availability may vary by service.
Hannah And Her Sisters [DVD]

Hannah and Her Sisters [Blu-ray]