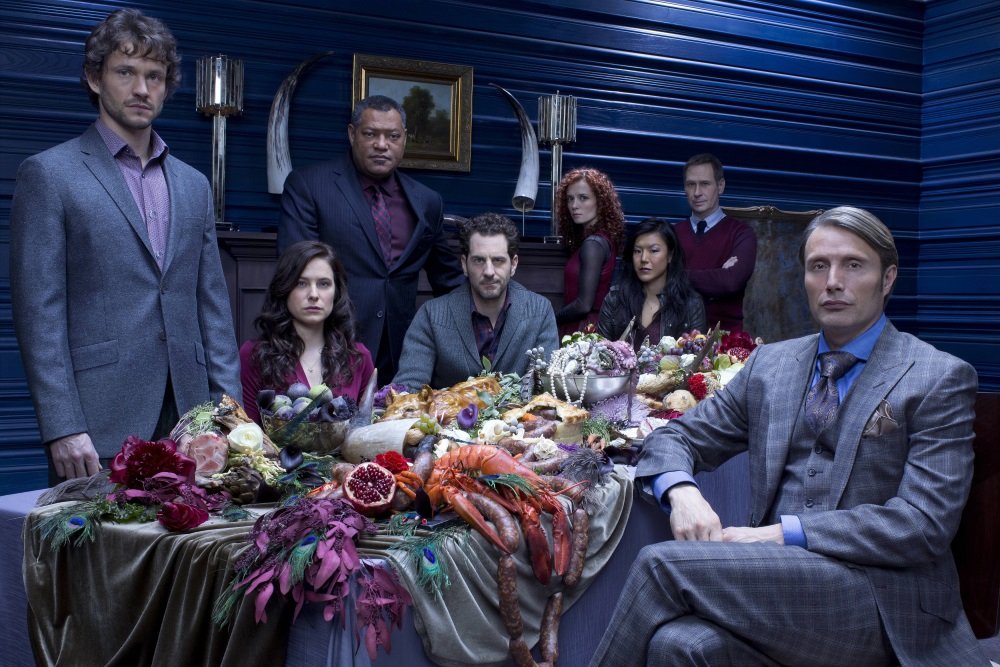 Hannibal (2013-2015) reimagines the universe created by author Thomas Harris in the cycle of novels that began with Red Dragon and introduced Dr. Hannibal Lecter to the world. Freely drawing inspiration for the novels and characters, creator and showrunner Bryan Fuller images the relationship between Dr. Hannibal Lecter (played with enigmatic intensity and cool charm by Mads Mikkelsen) and FBI profiler Will Graham (Hugh Dancy) when Hannibal was a respected psychiatrist and FBI advisor, before they realized he was a serial killer and cannibal gourmand who liked to share his victims with company.

The series launched on NBC over the summer of 2013 for a 13-episode run, taking the shortened season format and season-long story arc of cable TV. [Only 12 episodes ran; one was pulled from broadcast when the onscreen violence proved too close to a real-life event that occurred shortly before the episode was scheduled to run, but it is available on disc and streaming.] Ostensibly charting the hunt for an elusive killer who stages his victims like works of sculpture, the real story is Will’s fragile mental state—the ability to empathize with killers takes a serious toll on his well-being—and Hannibal’s elaborate psychological experiment with Will as an oblivious subject. In the realm of mad genius mindgames, this is as literal as it gets.

It was (and still is) the most beautifully designed and photographed series on television. Not what you expect from a show with such gruesome subject matter and grotesque murders. But then Hannibal is also a master of cuisine and any fine chef will tell you that presentation is everything. If American crime TV tends toward either restrained realism of television journalism or the lurid excess of the tabloid press, Hannibal draws from Bosch and Blake and the ecstasy of death and martyrdom in religious artwork.

The first season also introduces Laurence Fishburne as Will’s FBI boss, trying to balance his concern for Will with his commitment to stopping serial killers, Caroline Dhavernas as a fellow psychologist trying to protect Will from his own demons, and Gillian Anderson as Hannibal’s own psychiatrist, who may know just how dangerous her patient and colleague really is.

The arc of the first season swerves into territory too delicious to give away, and it leads directly to the second season, which finds Will turning ruthless in his own right to fight back against Hannibal’s ingenious manipulations, a turn that (for a while) makes him unexpectedly terrifying. It could be the next stage of Hannibal’s clinical trials, a challenge to push Will into becoming an adversary worthy of Hannibal or perhaps (from Hannibal’s perspective) a job interview for a partner. There is a perverse kind of love in his relationship with Will, a realization that Will is the only person who can truly understand the justice of his actions and the aesthetics of murder as artistic endeavor, and his torments seem determined to push Will into following in his footsteps.

Meanwhile, Eddie Izzard is a new serial killer that Jack takes on with Hannibal temporarily serving as profiler and the season also introduces Mason Verger (a chilling and unnerving Michael Pitt), the millionaire murderer who grapples with Hannibal while terrorizing and torturing his sister (Katharine Isabelle).

The third and final season slips from prequel to adaptation. The first half opens with Lecter in Europe with his psychiatrist (Anderson) posing as his wife, somewhere between prisoner and reluctant conspirator in his continued murder-as-fine-art spectacles, and incorporates significant storylines and elements from Hannibal. The second half adapts Red Dragon directly over the course of the final six episodes (making it the third screen version of the novel), with Richard Armitage as Francis Dolarhyde and Rutina Wesley (of True Blood) as the blind Reba.

The series was an American-French co-production shot in and around Toronto and shown stateside on NBC for three consecutive summers. It was utterly unique in the realm of network television, a melding of high art and pulp fiction, and played more like European art movie than American crime procedural. Fans cursed NBC for cancelling the series but it’s amazing than an American network supported a show this strange and surreal and aesthetically unique as long as it did. And there may be hope for a revival someday—Bryan Fuller is game as is Mads Mikkelson, though both are busy with new projects—but if this is indeed the end, it ends on a magnificent scene that offers finality, possibility, and mystery.

The DVD and Blu-ray editions include commentary on select episodes by the cast and creators, bonus featurettes, deleted scenes, and other supplements.

Pingback: What to watch: 'The Big Short' and 'Penny Dreadful' on Netflix, 'Hannibal' and 'The Candidate' on Amazon - Stream On Demand
Comments are closed.