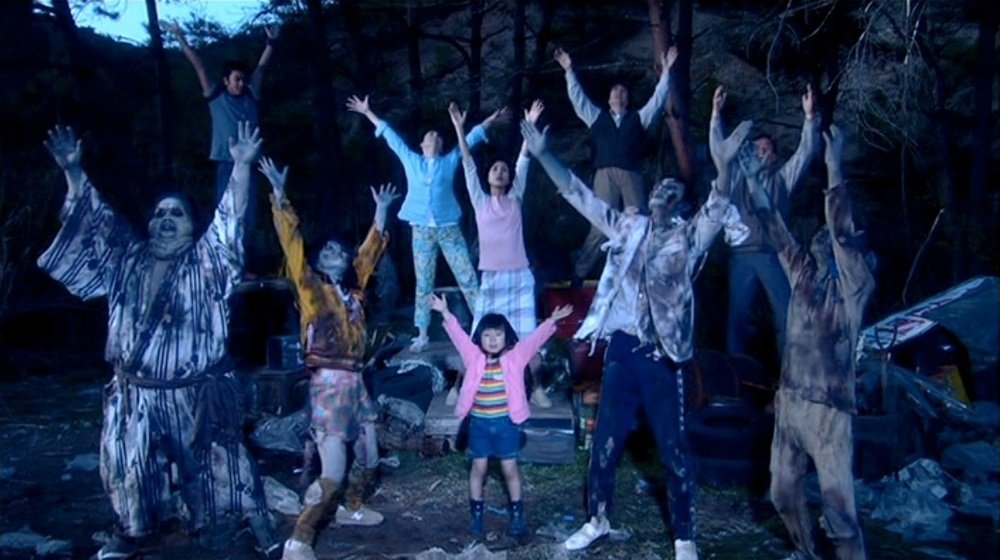 The Happiness of the Katakuris (Japan, 2001), Miike Takashi’s deliriously bizarre 2001 musical remake of the South Korean dark comedy The Quiet Family, is a bright, energetic, gonzo comedy about a dysfunctional family who run a secluded inn where guests check in but they don’t check out.

Think The Sound of Music at the Bates Motel. There are no psycho-killers here, just bad juju, but they don’t seem to notice that the magnificent landscape of their mountaintop retreat is surrounded by garbage pits, poisoned ponds, and a majestic mountain peak that belches ominous clouds of black smoke. Did I mention the family tends to break into song and soar through the sky in stylized dance numbers?

There have been more tuneful and more graceful musicals, and even with such oddball invention and chaotic energy the thin story tends to flag through almost two hours of complications. But the crazy quilt is ultimately sustained by something one wouldn’t expect from the king of kink: innocence, sweetness, an embrace of life. Miike both embraces and spoofs movie sentiment in loving parodies (a romantic duet becomes a starry-eyed karaoke number), transforms action spectacle into surreal clay animation silliness, and turns blue, bloated corpses into a clumping zombie chorus-line for an upbeat number.

Miike has a well-earned reputation for extreme violence and brutality so the biggest surprise for Miike fans and musical lovers alike is that, for all the offbeat black humor of this absurd, deliriously bizarre fantasy, Happiness is ultimately a warm hearted film about sacrifice, support, and four generations of family togetherness in face of mounting corpses. Now hand me the shovel.

Not rated, features sexual situations, violence, and animated gore. In Japanese with subtitles

, iTunes, GooglePlay and/or other services. Availability may vary by service.
The Happiness Of The Katakuris (2-Disc Special Edition) [Blu-ray + DVD]

The Blu-ray+DVD combo pack from Arrow is mastered from a new high definition film transfer and it features a new line-up of supplements. There’s a new commentary track from Japanese genre film expert Tom Mes, who also contributes a 23-minute visual essay “Dogs, Pimps and Agitators,” the original half-hour featurette “The Making of the Katakuris,” the five-minute featurette “Animating the Katakuris” (on the animated sequences), bonus interviews with Miike and the cast, and a booklet with new essays by Johnny Mains, Stuart Galbraith IV, and Grady Hendrix and a reprinted interview with Miike from 2002 (full disclosure: I conducted that interview and provided it to Arrow). Carried over from the earlier, long out-of-print DVD release is commentary by director Takashi Miike with film critic Tokitoshi Shiota, in Japanese with optional English subtitles and an alternate English audio translation track by unnamed American actors.