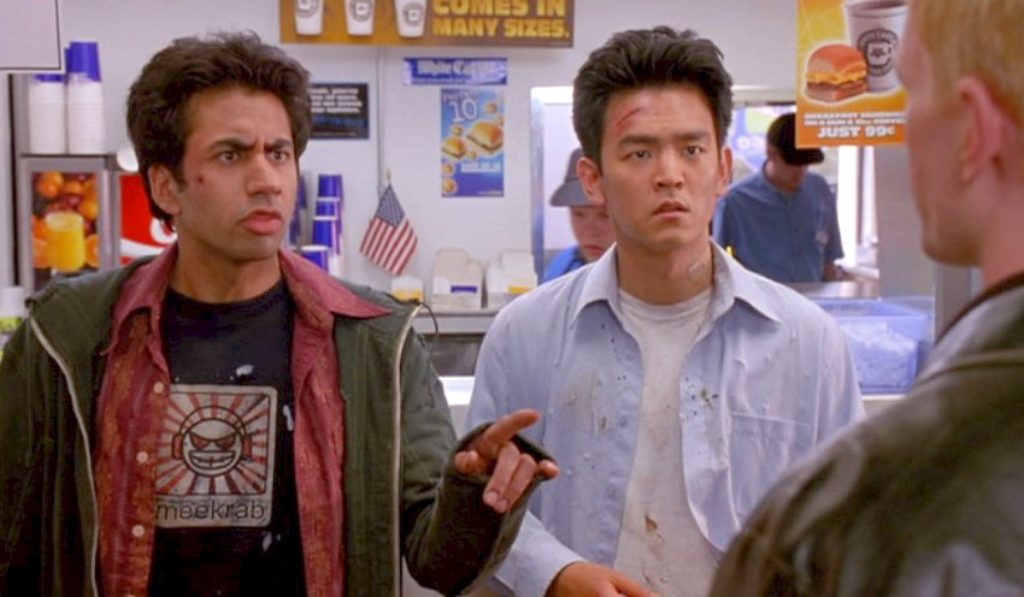 Harold & Kumar Go To White Castle (2004) is one of those rare movies that has its entire plot contained in the title.

John Cho is Harold, a timid Asian-American white collar cubicle slave at a brokerage firm, and Kal Penn is his roommate Kumar, an Indian-American college grad deftly avoiding his future while his father supports him. In the course of one eventful night they get stoned, get the munchies, and go on a hamburger run that takes them through the backroads of New Jersey, which turns out to be a Twilight Zone of sex fantasies, hillbilly horrors, homophobic hysteria, and racial stereotypes. It’s like a feature length dream sequence, except no one wakes up.

Director Danny Leiner executes the “I can’t believe I just saw that” bad-taste gags with more gusto than invention and all the finesse of a dirty joke on a primary school playground. Cho and Penn give it their all, as if to prove that bad taste embraces all ethnicities, and they make the point that the film’s clunky lampoons of cultural stereotypes fail to accomplish. Harold and Kumar are just a couple of American boys fighting for their right to be just as self-absorbed, decadent, and stupid as their Caucasian counterparts. Their ethnicity is beside the point. Except, of course, when it’s funny. And for all the awkwardness along the way, if usually is.

It spawned the sequel Harold & Kumar Escape from Guantanamo Bay (2008), which is even clumsier and not as funny, and the inspired holiday-themed A Very Harold & Kumar Christmas (2011), both with return visits by Christopher Meloni and Neil Patrick Harris.

The official R rating is for “strong language, sexual content, drug use and some crude humor,” but the MPAA is just being polite. It’s all crude and proud of it.