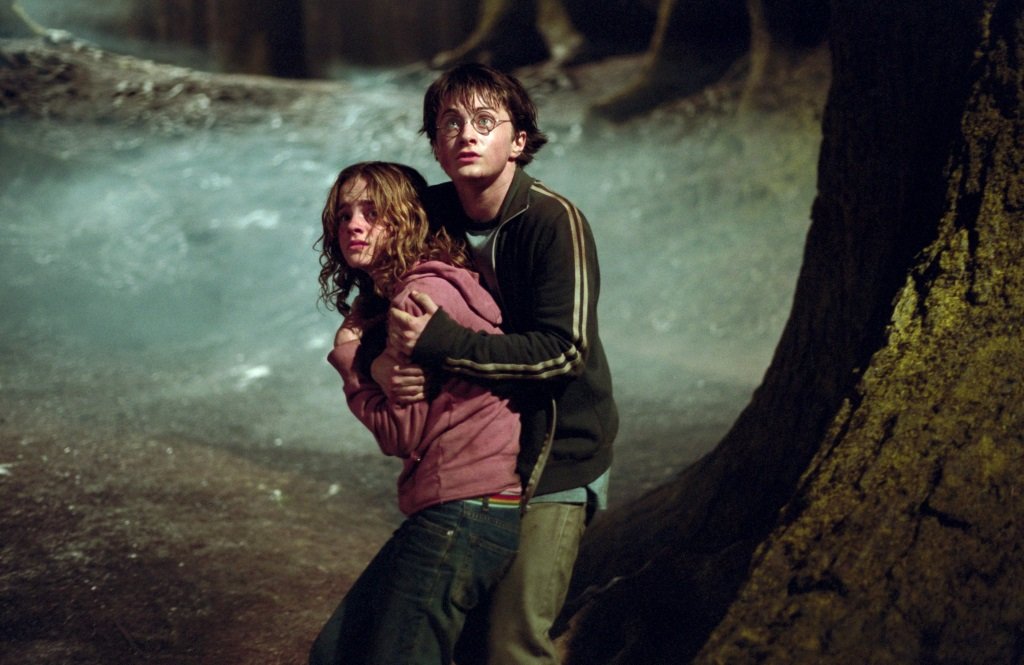 Looking back on the original Harry Potter and the Sorcerer’s Stone (2001), directed by Chris Columbus, we see a painstakingly literal translations of J.K Rowling’s first novel, a near-perfect replica created with a kind of funhouse spectacle of the wonders of the magical world come to life. Sorcerer’s Stone (2001) is a lush, lavishly produced introduction to Potter’s world with stars Daniel Radcliffe, Rupert Grint, and Emma Watson looking as fresh and young as eager pups and a superb supporting cast of British acting royalty: Alan Rickman (Professor Snape), Maggie Smith (Professor McGonagall), Robbie Coltrane (Hagrid), Richard Griffiths and Fiona Shaw (Uncle Vernon and Aunt Petunia), and Richard Harris as the gentle Albus Dumbledore

Radcliffe has grown already by Harry Potter and the Chamber of Secrets (2002) and his increased confidence and maturity grounds the film while director Chris Columbus continues to delight in the phantasmagoria of the magical details (like the Whomping Willow). Kenneth Branaugh is perfectly cast as the guest wizard, a glib, ego-maniacal author who spends more time preening that practicing spells. Sadly, this film marks the final appearance of the late great Harris as Dumbledore.

The kids have sprouted into teenagers for Harry Potter and the Prisoner of Azkaban (2004), which chronicles their third year at the magic school Hogwarts. They deal with the escape of the dreaded criminal Sirius Black (Gary Oldman) from Azkaban prison, a kindly but mysterious new Defense Against the Dark Arts teacher, Professor Lupin (David Thewlis), and the presence of the chilling Dementors. Michael Gambon takes over the role of Dumbledore with a delicate sense of authority and understated humor and Emma Thompson joins the cast as the dotty Professor Trelawney. Director Alfonso Cuaron breaks away from the literal translation to bring create a more intimate and stylistically complex movie, rooting the fantastic adventures in the turmoil and triumphs of Harry as he learns about himself and his family and discovers his potential as a young man. It remains the best directed film of the series.

In Harry Potter and the Goblet of Fire (2005), Potter battles dragons, water demons, an enchanted maze with fatal dead-ends and the evil “He Who Must Not Be Named” himself (Ralph Fiennes). It’s also the first film in the series to be helmed by a Brit, the very capable Mike Newell who takes the reigns of his first big-budget spectacle and creates a film both faithful and thrilling, even with massive amounts of the sprawling novel left out by necessity. Newell brings a distinctively British sense of low key, wry humor to the spectacle without losing the increasingly serious dimensions of the drama, and he brings out marvelous shades of personality from our evolving young heroes.

Harry Potter and the Order of the Phoenix (2007) adds to the usual teenage angst with decidedly unusual pressure: Harry is being smeared by the media to discredit his report that Lord Voldemort (aka He Who Shall Not Be Named) is back, ignored by the usually protective Dumbledore, and viciously harassed by the despot professor Dolores Umbridge (played by Imelda Staunton with a poisonous smile). The usual cast is back and Evanna Lynch debuts as the goofy yet sincere Luna Lovegood, but it also marks the arrival of director David Yates, a TV veteran with excellent credits but no special effects experience in vita. He takes charge of the series from this film on, bringing a focus on character over spectacle.

In Harry Potter and the Half-Blood Prince (2009), Voldemort and his Death Eaters terrorize both the magical and Muggle worlds and Harry and Dumbledore are desperately searching for the key to stopping them. This installment flirts with young love (and love potions) at Hogwarts but also moves into a darker and more adult direction and director David Yates follows suit with a film that is more intimate and somber. The effects are excellent but secondary to the character drama, with less rollercoaster action and spectacular set pieces, and anyone familiar with the series knows that a major character is killed here, setting up the tone for the final book, which is spread over two films.

Which brings us to the finale. It’s been quite a journey, from the bright, gee-whiz world of excitement and possibility that the young heroes encountered in the Harry Potter and the Sorcerer’s Stone (and they are young; it’s hard to remember just how fresh and wide-eyed and inexperienced they are in the first film) to the shadow of doom that hangs over Harry Potter and the Deathly Hallows – Part 1 (2010), the grimmest of the series. Harry, Hermione, and Ron set off to hunt for the horcruxes (if you don’t what they are or why they are important, you’re not following the story) alone, to draw attention from their comrades in arms in the war against He Who Shall Not Be Named and his Death Eaters, a force that is literally bringing the shadow of evil over the magic kingdom. Beloved characters die, best friends turn against one another and a mood of doom, that shadow of death and stifling repression, falls over the entire film. Which, you know, makes this one kind of a downer, the dark before the dawn promised in the second half.

Harry Potter and the Deathly Hallows – Part 2 (2011) brings the saga to a close with grand spectacle, yes, but also a sense of urgency and mortal stakes, in part because it is more active (none of that hiding out in the wilds stuff here) and in part because it finally brings all the conflicts to a mighty showdown. It’s the necessary pay-off after seeing Harry and friends at their most despairing.

I like the work that director David Yates has done with the Harry Potter franchise. He doesn’t have a playful way with visuals or a gift for spectacle, but he understands the character and invests in their relationships and their evolution. That’s what gives the grand spectacle of the final battle—the wizardocalypse of the magical world, fought appropriately enough on the grounds of Hogwarts, the wizard school where Harry was prepared to meet his destiny—its dramatic foundation. Sure it’s big, a special effects epic of dueling spells and grand destruction with practically every surviving member of the sprawling cast lining up on one side or another, but by now they aren’t just casualties. We know them and their deaths have a resonance. Sacrifice means something in this series. As does friendship and loyalty and respect.

The first three films in the series are rated PG, the rest rated PG-13.

The films were nominated for numerous Oscars and BAFTAs over the years, mostly in visual effects and craft categories.

It’s available in multiple editions, including the 31-disc “Hogwarts Collection” with three editions of each film – on Blu-ray, DVD, and UltraViolet – plus both 2D and 3D Blu-ray versions of Harry Potter and the Deathly Hallows – Part 1 and Part 2, along with featurettes, interviews, commentary, interactive functions, and other supplements. Along with the extras from the previous special edition releases—commentaries, featurettes, interviews, the terrific “Maximum Movie Mode” interactive audio-video tracks on the final films, and such—there are expanded bonus discs for both parts of Deathly Hallows which feature the final installments of “Creating the World of Harry Potter” series of documentaries: “Part 7: The Story” and “Part 8: Growing Up” (Blu-ray only). Also new to the final installment is an extended version of the already substantial interview “A Conversation with J.K. Rowling and Daniel Radcliffe.” The bonus disc features four hours of featurettes exclusive to this box set, including “The Harry Potters You Never Met” (a tribute to the stunt doubles to the young stars), “Designing the World of Harry Potter” (on the production design of the entire series) and the short featurettes “Secrets Revealed! Quidditch” and “Secrets Revealed! Hagrid.”