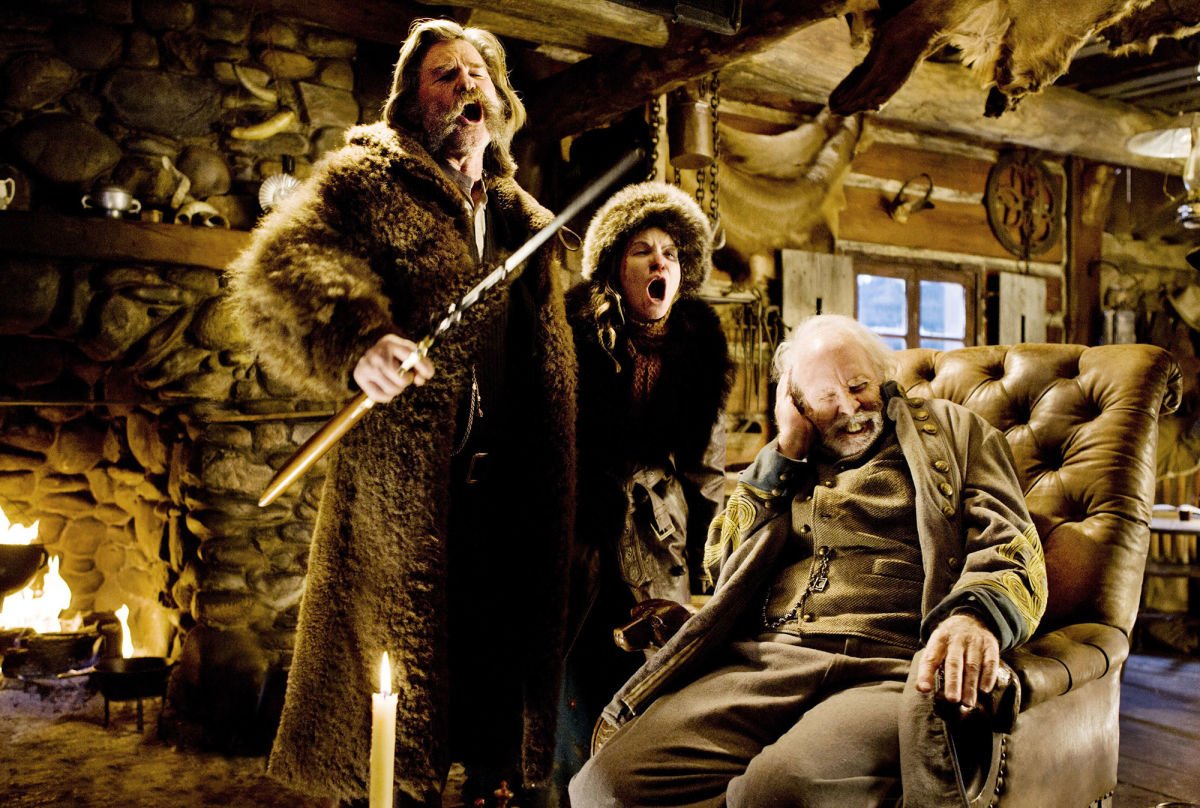 The Hateful Eight, the eighth feature by Quentin Tarantino, is something strange and audacious even for a filmmaker whose films are rarely short of either. It’s a vivid widescreen western epic that runs nearly three hours yet plays like a chamber piece, largely contained within the intimate quarters of a stagecoach stopover during a blizzard where the characters so succinctly described in the title find themselves in very close quarters.

Title aside, more than eight characters make an appearance in the film, and even among those eight central figures all is not as it seems. John Ruth (Kurt Russell rocking the bushiest mustache you’ve seen in ages) is a bounty hunter known as The Hangman and his latest bounty, the ferocious, foul-mouthed Daisy Domergue (Jennifer Jason Leigh), is chained to his wrist as they try to outrun a blizzard in a stagecoach racing through the Wyoming hills. Along the way his picks up Major Marquis Warren (Samuel L. Jackson), former Union officer turned fellow bounty hunter, and Chris Mannix (Walton Goggins), a former Confederate loyalist who claims to be the new sheriff of Red Rock. The other four await at Minnie’s Haberdashery, the nearest stagecoach stop: Bob the handyman (Demián Bichir), cowpuncher Joe Gage (Michael Madsen), professional executioner Oswaldo Mobray (Tim Roth), and General Sandy Smithers (Bruce Dern), a Confederate officer heading west to find his son. Or at least that’s who they say they are, and it’s soon clear that at least one of these folks is not who they say they are. They are, however, violent and at times sadistic people. It’s not just the world they live, in it’s the life they choose to lead.

The Hateful Eight is to some extent a mystery along the lines of Agatha Christie’s “Ten Little Indians” but far less genteel. The language is strewn with racial epithets and colorful figures of speech, and characters will die, many in gruesome, bloody, and unexpected ways because this is, after all, a Tarantino movie. It’s also a western, a thriller, and a chamber piece, and it is grounded in talk of vengeance and anger and history and hate. And race. While the Hangman’s bounty is at the center of the story, Major Warren—the sole black man in this company—is at the heart of Tarantino’s concerns. It’s 1870 and the wounds of the Civil War—not to mention the prejudices that have been festering long before the war—are still oozing, at least for some. Major Warren included.

It’s not exactly a culmination of Tarantino’s work to date but it echoes themes and storytelling ideas we’ve seen him play with since Reservoir Dogs. There are flashbacks and chapter titles and a narrator, revelations and surprises, and the distinctive Tarantino mix of the crude and the crafty and the cinematically ingenious. Some will find it slow going and others simply too brutal and profane to enjoy. That’s Tarantino for you. He’s not one to temper his instincts, especially with something that is personal to him.

In this age of digital cinematography, Tarantino revived a format that had not been used to shoot a feature in 50 years—Ultra Panavision 70, a large-gauge film with the widest aspect ratio ever screened in a theater, 2.76:1—and even premiered it in a roadshow release of 70mm film prints exclusively in theaters equipped with the archaic projectors. Those roadshow engagement featured a longer version than what was subsequently released in standard digital prints. True to Tarantino’s nature, the version released to VOD, Blu-ray, DVD, and Digital HD formats is the digital cut, which runs 168 minutes. Which is plenty long for most folks.

The Hateful Eight earned an Academy Award for the original score by Ennio Morricone—a first for Tarantino, who has always built his scores from a patchwork of pop songs and favorite soundtrack cuts—and Oscar nominations for Robert Richardson’s rich and textured cinematography and Jennifer Jason Leigh’s gleefully unhinged performance. Tarantino’s dialogue gives actors opportunities to run with wonderfully expressive characters and they make the most of the opportunity.

Needless to say, it is rated R for language and violence, plus brief nudity.

Also on Blu-ray and DVD and on SVOD through Amazon

, iTunes, Vudu, and other services.
The Hateful Eight [Blu-ray]

Blu-ray and DVD, with two featurettes: “Beyond the Eight: A Behind-the-Scenes Look” with the cast and crew in soundbite-sized interview clips and “Sam Jackson’s Guide to Glorious 70mm,” which is a fine introduction to the 50-year-old technology that Tarantino chose for his western. Each runs under 10 minutes. The Blu-ray also includes bonus DVD and Ultraviolent Digital HD copies of the film.