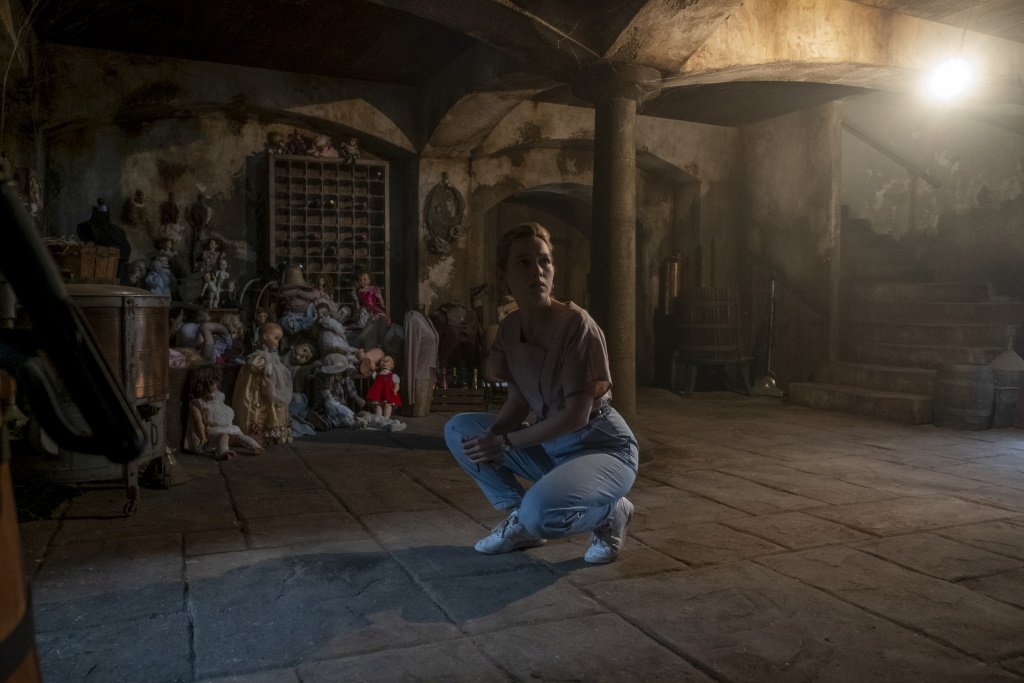 “The Haunting of Bly Manor” (TV-MA), from “The Haunting of Hill House” creator Mike Flanagan, adapts the Henry James classic “The Turn of the Screw,” updating it to 1980s England. “Hill House” actor Henry Thomas stars as the isolated man who hires an American nanny (Victoria Pedretti) for his orphaned niece and nephew in his vast mansion. (Netflix)

“The Right Stuff: Season 1” (TV-14) retells the story of the American space program and the pilots who became America’s pioneering astronauts. Based on the book by Tom Wolfe (which was previously made into the 1983 movie), it stars Patrick J. Adams, James Lafferty, Jake McDorman, and Colin O’Donoghue. Two episodes available, new episodes each Friday. (Disney+)

Ethan Hawke is John Brown in “The Good Lord Bird” (TV-MA), a limited series that weaves history and fiction to tell the story of a young boy (Joshua Caleb Johnson) who escaped enslavement and joins the abolitionist on his holy crusade. New episodes each Sunday. (All Showtime platforms)

The sixth and final season of the Canadian comedy “Schitt’s Creek” (TV-MA) swept the Emmy Awards this year, with wins for outstanding comedy series, writing, directing, and all four leading actors. It’s now streaming on Netflix.

The fourth and final season of the “Mr. Robot” (2019, TV-MA), starring Rami Malek as a hacker with deep psychological scars, brings the strangest conspiracy thriller on TV to a satisfying close. (Amazon Prime)

The complete run of the sitcom “Parks and Recreation” (TV-PG) with Amy Poehler, all 46 seasons of “Saturday Night Live” (TV-14), and episodes of the new season (available a day after their respective network debuts) are now on Peacock TV.

Colin Firth and Julie Walters star in “The Secret Garden” (2020, PG), adapted from the beloved novel by Frances Hodgson Burnett about an orphaned girl (Dixie Egerickx) who finds a magical garden hidden in her uncle’s estate.

Louis Gossett Jr. is “The Cuban” (2020, not rated), an elderly musician with Alzheimer’s who befriends a young pre-med student (Ana Golja) at his nursing home.

Adam Sandler stars with Kevin James and Kenan Thompson in the comedy “Hubie Halloween” (2020, not rated).

A struggling playwright (Radha Blank) reinvents herself as a rapper in the Hip-Hop comedy “The Forty-Year-Old Version” (2020, not rated).

A 14 year-old-boy struggles with gender identity and religion in “Saturday Church” (2017, not rated), an award winning LGBTQ drama.

True stories: the documentary feature “Dolly Parton: Here I Am” (2020, not rated) profiles the American music legend and the reality series “Deaf U: Season 1” (not rated) follows a group of deaf students at Gallaudet University.

International passport: The sci-fi thriller “To the Lake: Season 1” (Russia, not rated, with subtitles) is the latest dystopian series about a deadly plague. Also new:

The first pair of original horror features in the “Welcome to the Blumhouse” anthology series are now available: Canadian crime thriller “The Lie” (2018, R) with Mireille Enos, Peter Sarsgaard and Joey King and sci-fi thriller “Black Box” (2020, not rated) with Mamoudou Athie and Phylicia Rashad.

A scientist (Theo James) working on artificial intelligence uploads his dead wife’s memories into his prototype in the science fiction drama “Archive” (2020, not rated).

Tom Hardy made his first international splash in “Bronson” (2009, R) playing the most notorious prisoner in England.

International Passport: the satirical “Force Majeure” (Sweden, 2014, R, with subtitles) uses dark comedy to explore questions of expectations and obligations. It won an award at Cannes.

“Terminator: Dark Fate” (2019, R) is the first sequel since 1991 to star both Linda Hamilton and Arnold Schwarzenegger.

The British crime comedy “Code 404” (2020, not rated) stars Daniel Mays as an elite detective brought back from the dead with glitchy AI technology and Stephen Graham as his partner.

All eight “Harry Potter” (PG/PG-13) movies are available to stream for the month of October only.

The documentary series “The Comedy Store” (TV-MA) surveys the legacy of the club that helped launch the careers of some the greatest comedians of all time. New episodes Sundays. (All Showtime platforms)

Kate Elliot stars in the psychological mystery “The Gulf” (2019, not rated), a limited series from New Zealand. All six episodes available.

Over two dozen movies are featured in the “’70s Horror” collection, which surveys the transformation of horror cinema in the U.S. and abroad, from the grace of “Daughters of Darkness” (Belgium, 1971, R) and Robert Altman’s “Images” (1972, R) to the transgressive assaults of Tobe Hooper’s “The Texas Chain Saw Massacre” (1974, R) and Wes Craven’s “The Hills Have Eyes” (1977, R) to the intelligence of “The Wicker Man” (1973, R) and Philip Kaufman’s “Invasion of the Body Snatchers” (1978, R) remake. And those aren’t the only new horror arrivals. There is: