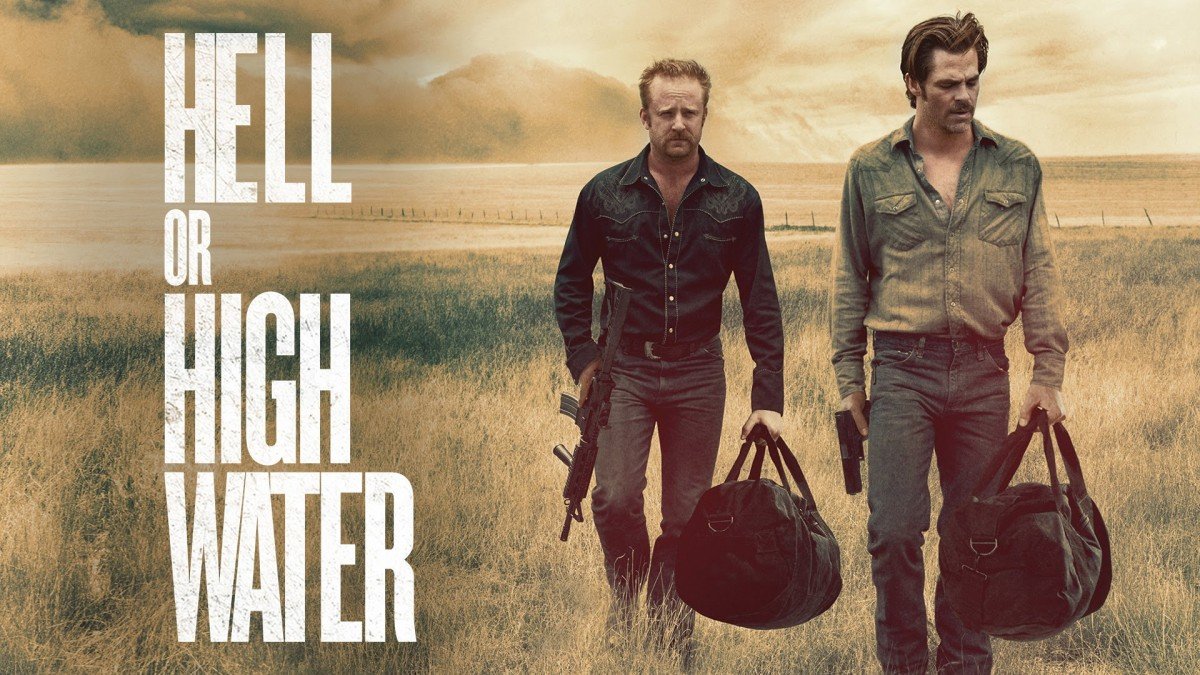 Hell or High Water (2016) is as good an American drama as you’ll see this year. Jeff Bridges stars as a Texas Ranger on the trail of a pair of bank robbers and his playfully crusty performance as a laconic frontier lawman on the verge of retirement gives an easy, laid back quality to a film that is otherwise riled up by a sense of betrayal. This is a 21st century version of American outlaw cinema that first took root during the depression and blossomed in films like They Live by Night and Bonnie and Clyde, reframed by the mortgage crisis, predatory lending, and cold corporate greed.

So while Bridges centers the film with his good old boy comments and frontier wiles, Chris Pine and Ben Foster drive it as brothers on a crime spree targeting branches of a specific regional bank for small bills and relatively low hauls from the cashier trays. Pine is Toby Howard, divorced and unemployed and struggling to save his family farm from foreclosure, and Foster is Tanner, the bad seed criminal who provides the experience and the aggression to Toby’s master plan.

Pine puts his charm in low gear, playing pensive and conflicted and determined behind those blues eyes (no Captain Kirk bravado here), and gives the explosive emotional scenes over to Foster, who gleefully terrorizes bank clerks and bystanders with such ferocity you believe he might just shoot someone to prove a point. Or simply to let off a little steam. Toby is no pacifist but he clearly blanches at the violence inherent in their campaign when Tanner lets his hair-trigger anger loose with a little too much glee at each heist. But not enough to put the brakes on a plan that is headed down a bumpy road that may dead end before the journey is over.

British filmmaker David Mackenzie directs from an original screenplay by Taylor Sheridan (Sicario) and they manage to split audience sympathies between the about-to-retire Ranger and the bank-robbing brothers while constantly reminding us of the collateral damage of the spree. It makes for a lean, craggy mix of outlaw western, chase thriller, and rage-against-the-machine drama set against a West Texas landscape of endless plains, depressed small towns, and empty highway strip malls. In this sun-blanched world, a land both grand and depressing, the brothers come off as folk heroes to the civilians, ripping off the business that foreclosed on so many farmers and businesses. Don’t mistake them for modern Robin Hoods—they aren’t spreading the wealth, merely looking out for family—but in a culture of hopelessness, they are as close as some of these folks will get.

It was nominated for four Academy Awards, including best picture and a supporting actor nomination for Jeff Bridges, and Ben Foster won a Film Independent Spirit Award for his performance.

The Blu-ray and DVD features an audience Q&A with director David Mackenzie and actors Jeff Bridges, Chris Pine, and Gil Birmingham, the featurettes “Enemies Forever: The Characters of Hell or High Water,” “Damaged Heroes: The Performances of Hell or High Water,” and “Visualizing the Heart of America,” and red carpet footage. The Blu-ray also 06features bonus DVD and Ultraviolet HD copies of the film.