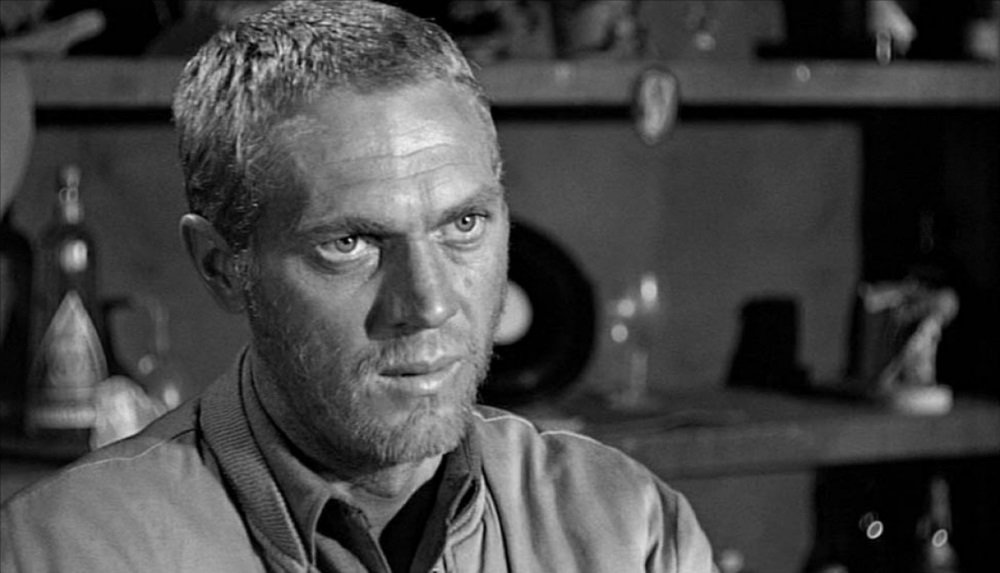 A decade before he directed Dirty Harry and The Shootist, Don Siegel brought his tough world view and crisp, no-nonsense direction to Hell is for Heroes (1962), a quintessential World War II drama of an undermanned American platoon in France holding off a German advance through sheer bluff and bravery.

Steve McQueen is curt and surly as the insubordinate loner whose tactical skills and soldiering savvy make him indispensable to his new unit. His reputation proceeds him but commander Fess Parker is no position to be choosy when he learns that his tired platoon will not be shipping home as rumored, but tossed into a ragged new offensive.

While no B-movie, this was produced on a tight budget—no spectacular battle scenes here, it’s all close quarters combat and the suggestion of a bigger battle just outside of the frame—but it has a terrific supporting cast. Harry Guardino co-stars as the soulful Sarge, James Coburn is the slow talking, forever tinkering mechanic, Bobby Darin the scavenger with a small fortune in trinket treasures, and Nick Adams the Polish orphan and unit mascot. Bob Newhart makes his feature debut as a hopelessly lost typing clerk drafted into the undermanned unit and recreates his nightclub schtick making phony phone calls near a Nazi listening post in the pill box.

This is less a patriotic flag waver than a “war is hell” drama the frames the battle not in its tactical importance (which is negligible) but its cost in human life. McQueen’s taciturn performance as a ruthlessly effective soldier and Siegel’s tough, lean direction make it a modest classic of the genre. He doesn’t dwell on the loss of life, he merely frames the heroism with a bleak ending that questions what exactly they’ve died for.