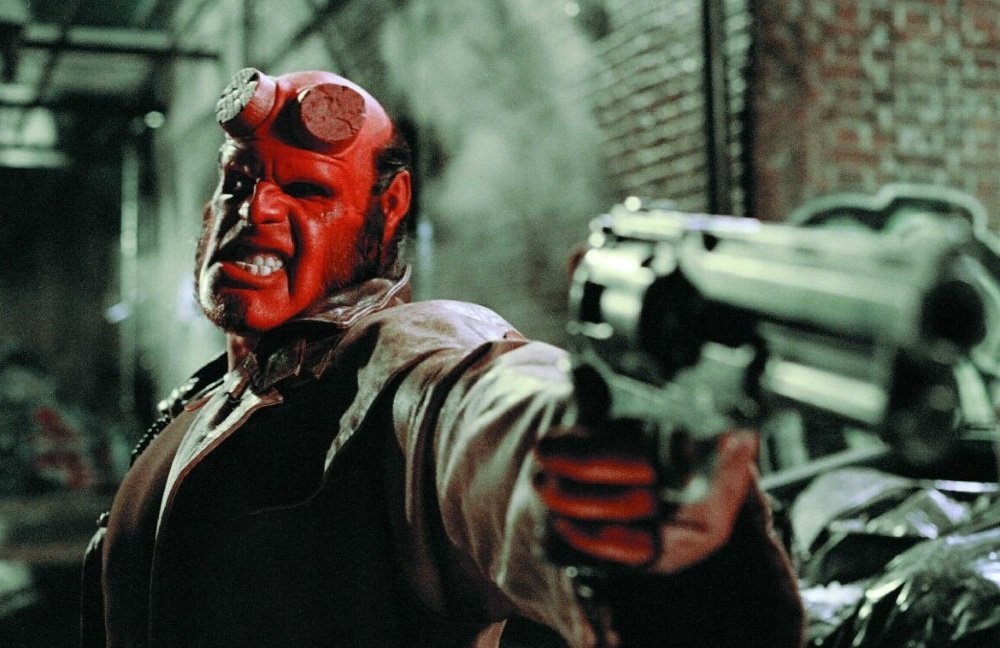 Hellboy (2004) – Before Marvel recreated the superhero movie in the context of a connected universe of characters and storylines, like the comic books that inspired them, the best comic book movies created their own, self-contained worlds. One of the best of these was Guillermo del Toro’s adaptation of Mike Mignola’s cult comic Hellboy and Ron Perlman, performing under a massive ember-red suit with a thick log of a head sprouting a pair of filed down horns and a right arm like a slab of granite, is perfect as the cigar-puffing, wisecracking, kitten-loving demon who covertly battles supernatural monsters.

Hellboy is born a demon baby called forth from Hell (more of a Lovecraftian vision of the underworld than a Christian one) by Hitler’s mystics in World War II but rescued and raised by a British paranormal scientist Professor Bruttenholm (John Hurt) to fight on the side of the angels. Bruttenholm raises him as his son, under the watchful eye of the American Bureau of Paranormal Research and Defense. In the nature vs. nurture argument, it makes the case for a strong, emotional upbringing. Thought treated with near contempt for those outside the inner circle, and as simply an assignment by his assigned keepers, he is a son to Manning, a willful, restless, devilish sort of son, but one who loves his father and has inherited his values.

Guillermo del Toro’s adaptation draws on numerous stories and characters from Mignola’s episodic adventures for his epic battle against a doomsday-obsessed madman, but his greatest achievement is fleshing out the characters and giving life to their unspoken bonds of friendship and understanding: a squad of “freaks” hidden from the society they serve. That, and finding a visual style to match Mignola’s vivid woodcut illustration style and midnight world of supernatural evil.

Hellboy, the cigar-puffing demon from another dimension, fights supernatural monsters to protect America from evil but he isn’t even allowed to go out and enjoy the freedom he’s helped secure. So he sneaks out for day trips, running along rooftops and leaping from building to building, or just visiting his tormented pyrokinetic teammate Liz (Selma Blair), the girl he loves who has the power to summon and shoot flames, but not the power to fully control it.

Doug Jones suits up as the amphibious “Abe” Sapien, a mystery mutant voiced by David Hyde Pierce, and Jeffrey Tambor is the by-the-book bureaucrat who can’t stand Hellboy because he has to cover for him every time he’s spotted by the public. In this world, Hellboy is part of the American folklore, like Bigfoot and UFOs, with out-of-focus pictures on tabloid papers, conspiracy theories, and even a comic book created around the legend.

In this case legend is true. And it has a real soft spot for kittens.

Watch free on Hoopla, which is available through most public and college library systems.

and other services. Availability may vary by service.
Hellboy: Two-Disc Special Edition [DVD]

The two-disc DVD features two commentary tracks (creator commentary by director Guillermo del Toro with co-executive producer/original comic book creator Mike Mignola and cast commentary by Ron Perlman, Selma Blair, Rupert Evans and Jeffrey Tambor) and an optional storyboard tracks (with the sketches in the bottom right corner of the screen for comparison), the exhaustive two-and-a-half hour-documentary “Hellboy: The Seeds of Creation” (which follows the project from the origin of the comics through scripting and special effects to the finished film), three deleted scenes with optional director commentary, video introductions by del Toro and Blair, character bios (written by del Toro), branching DVD-comics (jump to eight original Mike Mignola Hellboy comics), “Right Hand of Doom” set visits (behind the scenes at eight locations) at key points in the film, and storyboard and animatics comparisons.

The Blu-ray and DVD “Director’s Cut” editions feature a version of the film that runs 13 minutes longer and adds even more supplements: two additional commentaries (one by director Guillermo del Toro, the other by composer Marco Beltrami on a track with the isolated score), a revised optional storyboard track with hundreds of new images (shown in the bottom right corner of the screen for comparison), a video version of the original release’s cast commentary by Ron Perlman, Selma Blair, Jeffrey Tambor and Rupert Evans (with the original cut of the film shown in a small box in the bottom right corner), a Q&A with Guillermo del Toro, Ron Perlman and Mike Mignola from Comic-Con 2002, a collection of “Production Workshop” featurettes, A Quick Guide to Understanding Comics with Scott McCloud, galleries of stills, pre-production art by Mike Mignola, conceptual art, pin-up art by comic book artists, and excerpts from the Director’s Notebook.