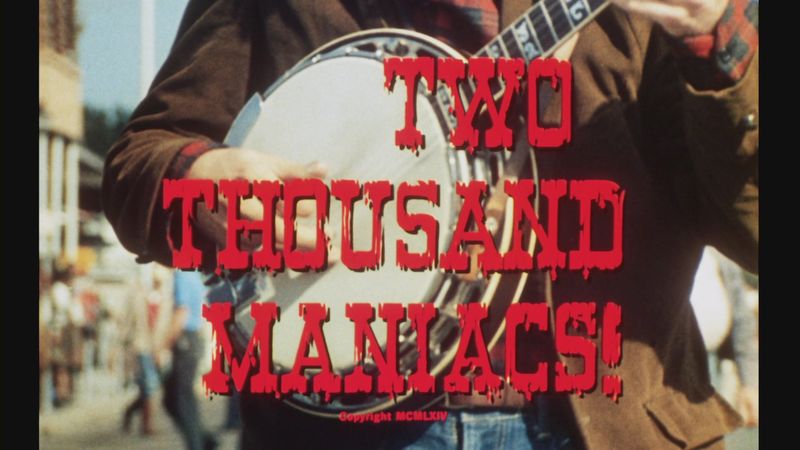 Herschell Gordon Lewis was a filmmaker with the mind of a promoter, which only makes sense coming from his background of marketing and salesmanship. So when he saw an opportunity, he pounced. After jumping into filmmaking with a series of “nudie cutie” sexploitation films, he and producer David F. Friedman inaugurated an entirely new genre of exploitation filmmaking with their “Blood” trilogy: the “gore” film.

Blood Feast (1963), a bloody comedy of an Egyptian cultist who caters a party with a buffet of human parts, and Color Me Blood Red (1965), a comic gore film of a mad painter who discovers a new shade of crimson in blood and starts slicing up his models for more paint, bookend the trilogy and are as arch and awkward as they are shamelessly gruesome.

But between the two films he made his grotesque masterpiece Two Thousand Maniacs! (1964). The tale of Southern Civil War ghosts returning for revenge (“Oh the South’s gonna rise again…”) is too quirky to be easily dismissed and too outrageous and unreal to be taken seriously. The mix of hillbilly humor and sadistic, sick horror creates a unique ambiance, and the odd hush that falls on the crowds when their revenge doesn’t bring the expected satisfaction adds an unexpected tone of regret, if the unsettled dead can have such feelings. One of the film’s selling points was Connie Mason, a Playboy centerfold making her acting debut. Which is the only explanation for her casting, because it certainly isn’t her acting talents. And no, she stays fully clothed.

Lewis tried his hands all sorts of exploitation pictures but returned to the genre that made his cult reputation with the Grand Guignol gross-out The Wizard of Gore (1970). A seedy, histrionic magician caked in cheap pancake make-up saws a female volunteer in half with a chainsaw, hammers a spike through another woman’s head, and generally eviscerates a parade of unlucky stooges in full view of his audience. They witnesses an amazing bloodless illusion, but we see a nasty spectacle of blood and guts with the homicidal wizard rooting around the gore like a kid in a mud puddle. It has something to do with mass hypnosis, but that doesn’t explain how his victim zombie walk out the door to fall apart minutes later. The performances are wooden, the dialogue hackneyed, and the effects unconvincing at best, but the film delivers gross-out gore by the bucketful and then pulls the carpet of reality out in a crazy mind-game of a coda. It’s not exactly surreal, but it is most certainly unreal.

All four films are included in the Criterion Channel collection “Meet the Filmmakers: Herschell Gordon Lewis,” which also includes the documentary Herschell Gordon Lewis: The Godfather of Gore (2010), an affectionate portrait from directors Frank Henenlotter (a cult movie historian as well as a director) and Jimmy Maslon and producer Mike Vraney.

All unrated, with explicit (if unrealistic) violence and gory imagery

The Wizard Of Gore [Blu-ray]