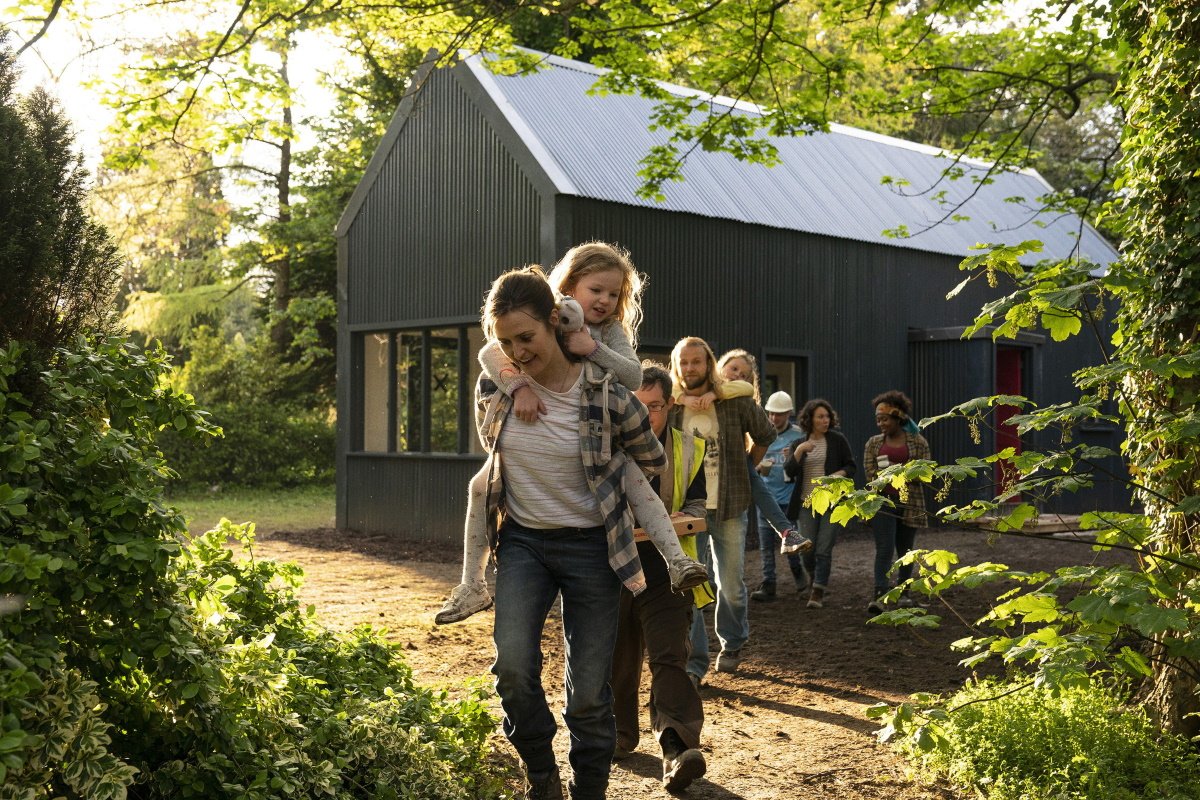 A hard-working mother (Clare Dunne, who also cowrote the original script) flees her abusive husband and builds a home for her two young daughters—literally, on land given to her by her sympathetic employer (Harriet Walter)—in “Herself (2020, R). The inspirational Irish drama from director Phyllida Lloyd doesn’t shy away from domestic abuse or a system that fails to protect our resilient mother but it finds hope in the community that helps her construct a DIY house from scratch. (Amazon Prime)

Vanessa Kirby plays a woman dealing with grief and loss after the death of a child in “Pieces of a Woman” (2021, R), an emotionally raw drama that costarring Shia LaBeouf as her resentful working class husband and Ellen Burstyn as her criticizing mother. It’s a portrait in rage and self-destructive behavior centered by Kirby’s intense performance. (Netflix)

A disgraced exorcist exiled to a remote town in Spain teams up with the mayor and a veterinarian when Hell is unleashed in “30 Coins: Season 1” (Spain, TV-14, with subtitles). The hit Spanish series, created and directed by horror auteur Alex de la Iglesia, makes its U.S. debut. New episodes each Monday. (All HBO platforms)

As network TV shows return, Hulu streams new seasons of shows from ABC, NBC, and Fox, including the sitcom “Mr. Mayor” from creator/producer Tina Fey, starring Ted Danson as the newly-elected mayor of Los Angeles and costarring Holly Hunter and Bobby Moynihan, and the games shows “Name That Tune” and “Celebrity Wheel of Fortune.” Also streaming are new seasons of “The Rookie” (TV-14), “Zoey’s Extraordinary Playlist” (TV-14), and “The Bachelor” (TV-14). Episodes available the day after their respective network debuts. (Hulu)

Daniel Craig and Rooney Mara takes the leads in the American version of “The Girl with the Dragon Tattoo” (2011, R), directed by David Fincher with more dimension and depth than the original Swedish screen version.

True stories: Martin Scorsese discusses New York with writer Fran Lebowitz in the seven-part limited series “Pretend It’s a City” (2021, TV-14) and “Surviving Death” (not rated), based on the book by Leslie Kean, explores the possibility of an afterlife.

International passport: “Lupin: Season 1” (France, with subtitles) takes the classic stories of the gentleman thief Arsène Lupin into the next generation as his son (Omar Sy) sets out to avenge his father. Also new is the midlife crisis comedy “Stuck Apart” (Turkey, 2021, not rated, with subtitles).

“The Intervention” (2016, R) is “The Big Chill” for the thirtysomething crowd with a cast that includes Melanie Lynskey, Jason Ritter, Natasha Lyonne, and Cobie Smulders. It’s directed by Clea Duvall (“Happiest Season”).

Tom Hanks stars in “Charlie Wilson’s War” (2007, R), a wily political drama based on a true story, and “Road to Perdition” (2002, R), taking a rare dark role as a professional killer who goes on the run to protect his young son.

Cate Blanchett plays the first Queen Elizabeth in the historical dramas “Elizabeth” (1998, R) with Geoffrey Rush and “Elizabeth: The Golden Age” (2007, PG-13) with Clive Owen, and is a psychic in the American South in Sam Raimi’s “The Gift” (2001, R) with Keanu Reeves.

A drama set in the music world, “The High Note” (2020, PG-13) stars Tracee Ellis Ross as a superstar diva coasting on her legacy and Dakota Johnson as the personal assistant who encourages her to follow her instincts. (All HBO platforms)

Hugh Jackman is “The Wolverine” (2013, PG-13) in the second solo film featuring the breakout star of the “X-Men” movies. This one sends him to the Japanese underworld.

The animated comedy “Ferdinand” (2017, PG) features the voice of John Cena as the peace-loving bull.

A lab assistant (Molly Windsor) studying forensics enlists her professors to help her bring a criminal to justice in “Traces: Season 1” (2019, not rated), a British crime drama based on a story by Val McDermid.

With the addition of the eighth and final season of the acclaimed French crime drama, “Spiral: Complete Series” (France, 2005-2020, TV-MA, with subtitles) is now streaming in its entirety on MHz (Season 8 episodes arrive each Tuesday). Also on MHz:

Criterion Channel spotlights nine features and two shorts “Starring Peter Sellers,” from early comedy classics “The Ladykillers” (1955) and “The Mouse That Roared” (1959) to his Stanley Kubrick films “Lolita” (1962) and “Dr. Strangelove, or: How I Learned to Stop Worrying and Love the Bomb” (1964). Criterion Channel also presents the streaming premiere of the documentary “The Ghost of Peter Sellers” (2018, not rated) from director Peter Medak. Also new: