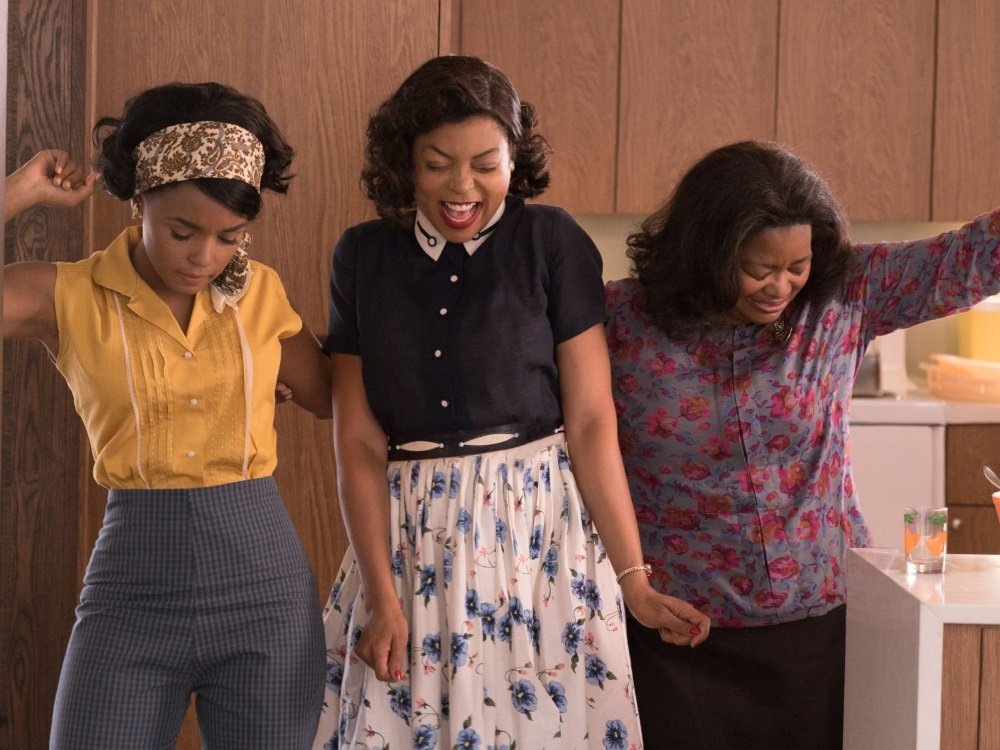 Hidden Figures (2016), a Hollywood drama based on the true stories of three African-American women who were essential yet unseen and uncelebrated members of the team that put the first Americans in space, is terrific drama, eye-opening history, and a great lesson for Hollywood. This movie headlined by three African-American actresses was the number one film in America for two weeks in a row and finished its first run as one of the most profitable films of the year: another exhibit in the case against Hollywood’s insistence that movies about women and/or people of color are risky investments. This is not a film that overcame hurdles, it’s a film that found an audience by telling a story about smart, talented, and ambitious women that people were eager to see.

Katherine G. Johnson (Taraji P. Henson), Dorothy Vaughan (Octavia Spencer), and Mary Jackson (Janelle Monáe) are three mathematicians working in the computational equivalent of the secretarial pool at NASA in the early 1960s. They are computers, a name that meant something altogether different in the era before IBM and Apple, manually checking the math that the engineers and scientists base their work on. And they are segregated in their own basement room, the computations outsourced to this hidden cave and the results carried back by a white secretary so the white men never have to interact with them.

Dorothy is a talented manager of her section who does the work of a division head without title or commensurate pay and Spencer brings a fierce spirit to the role, part protective leader of her pool, part visionary. When NASA installs its first IBM computer (the size of a department store), she takes steps to make sure that she and her girls remain essential to the program. Mary aspires to become an engineer and applies through a NASA program, only to find roadblocks thrown up every step of the way, not the least of which is a white-only college that teaches the courses she needs.

Katherine, however, becomes the primary focus of the film and Henson plays her with the frustrated patience of a woman who refuses to give in to a rigged system. A child prodigy math genius who can handle the physics, the geometry, and the complex equations necessary to plot the trajectory of space flight, she’s drafted by Al Harrison (Kevin Costner), head of the Space Task Group, to join the team. She’s one of the only women in a male environment and the only black face in a sea of starched white shirts and faces. This is Langley, Virginia, and NASA’s campus is still segregated. The only colored restroom is a mile away, which means every trip to the loo is a veritable mission, and the communal coffee pot is immediately set off limits by her petty male colleagues (Jim Parsons of The Big Bang Theory plays one of the ringleaders of the racial nastiness, and there’s nothing cute or harmless about him this time). With no Human Resources department to appeal to, she puts her head down and works through it all, coming up with mathematical solutions that leave the men in startled silence.

Directed and co-written by Theodore Melfi (St. Vincent) from the non-fiction book by Margot Lee Shetterly, Hidden Figures takes breaks to sketch in their personal lives but it’s their working lives that are most interesting and most compelling: the dynamics of power in a bigoted workplace, the personal humiliations they suffer every day, the social hierarchy that a blithely racist female administrator (Kirsten Dunst) passes on down to Dorothy with every new stack of projects dropped in her section’s lap. More illuminating than the personal bigotry, however, is the institutional racism that everyone (or at least all the white employees) simply accept as status quo. Costner is shorthand casting for old-school values and moral authority, which makes his blinders to the situation all the more resonant. It’s a genuine shock to him that Katherine has to walk across the entire campus just to use the restroom, and a wake-up call that nudges him to notice the “separate but equal” coffee pot on the company craft table. But while it is satisfying to watch him quite literally use a sledgehammer to smash segregation, it is hardly heroic; if anything, it communicates at his shame at having never considered the inequities this valued team member faced until that moment.

The historical record is smudged to compress the drama into the time frame of the first Apollo mission and some liberties were taken in the adaptation; this is a drama, not a documentary. But the women and their stories are true and the end credits open with the time-honored yet absolutely relevant tradition of filling out the accomplishments of three subjects and showing stills of the real women next to the actresses. It’s a pointed reminder that, dramatic flourishes aside, their stories are real life and their accomplishments deserve to be celebrated.

On Blu-ray, DVD, and 4K UltraHD from 20th Century Fox Home Video and on SVOD through Amazon Video

, iTunes, GooglePlay and/or other services. Availability may vary by service.
Hidden Figures [Blu-ray]

The Blu-ray edition includes commentary by writer-director Theodore Melfi and star Taraji P. Henson, the five-part documentary “It All Adds Up: The Making of Hidden Figures” (40 minutes), the short featurette “Hidden Figures: Filming in Georgia” (5 mins), and eight deleted scenes (10 mins), plus bonus DVD and Ultraviolet HD copies of the film. The 4K UltraHD release includes bonus Blu-ray (with all the supplements) and Ultraviolet HD copies of the film.