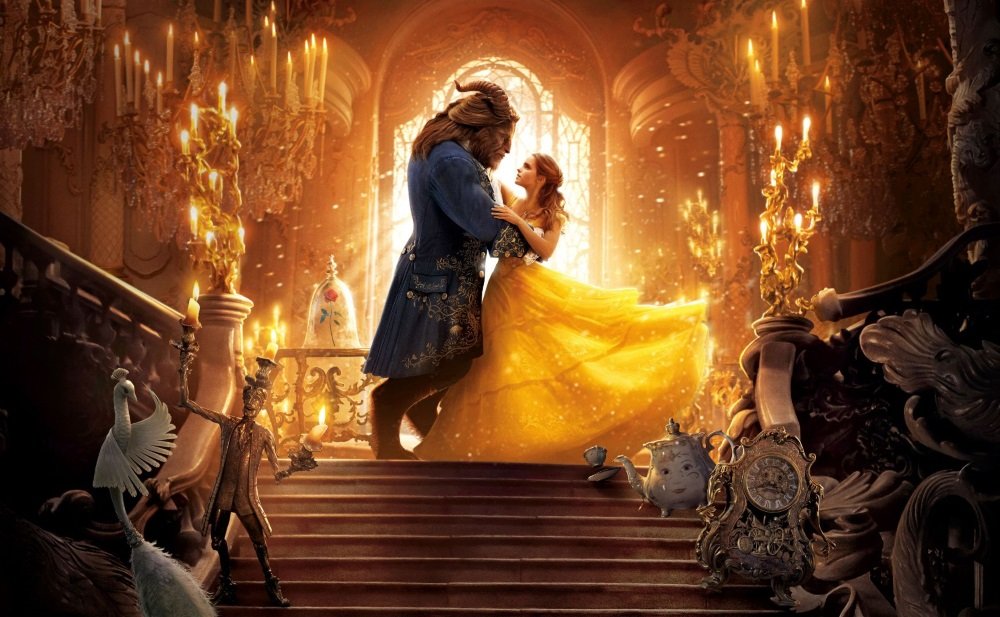 So Thanksgiving dinner is over, the dishes are done (or at least shoved to the side), and the family is settling in for the post-meal hibernation. The question comes up: what to watch? Sure, you’ve got Netflix or Amazon Prime or Hulu but there’s so much sort through and it’s easy to get lost in the menus.

Here’s a short list of streaming possibilities that you may have missed when they came out, or simply just never gotten around to, that are fine for family viewing, plus a few more grown-up titles for the adults in the room. This is limited to the three major streaming services: Netflix, Amazon Prime, and Hulu. The other, smaller services with fewer options are easier to sort through.

Rogue One: A Star Wars Story (2016, PG-13), starring Felicity Jones a scruffy survivor who takes on the Empire with a team of outcasts and mavericks, is an action packed mission thriller plays out in the margins of “Star Wars” with a darker portrait of rebellion and war.

A little less dark are Beauty and the Beast (2017, PG), Disney’s lavish live-action remake of their animated musical starring Emma Watson and Dan Stevens, and Tim Burton’s remake of Charlie and the Chocolate Factory (2005, PG) with Johnny Depp as an odd duck Willy Wonka.

The animated odyssey Kubo and the Two Strings (2016, PG) from Portland’s Laika Entertainment is a family-friendly epic of imagination steeped in Japanese culture and mythology.

Other animated options include Disney’s Pocahontas (1995, G) but why not expand your horizons and sample the steampunk imagination of April and the Extraordinary World (France, 2015, PG, in English), and the Oscar-nominated My Life as a Zucchini (France, 2016, PG-13, English and subtitled versions)?

There are now two seasons of Netflix’s binge-worthy Stranger Things, the wonderfully weird series about a group of school friends who face strange doings in their rural Indiana, a show filled with eighties nostalgia and grounded in childhood friendships and imagination. May be a little too intense for young kids but adolescents and teens should love it. Adults too.

Anne with an E offers a fresh take on “Anne of Green Gables” with Amybeth McNulty as the red-headed orphan in 19th century Canada. One season of eight episodes now available.

And for a family-friendly superhero series, try The Flash, a show with a likable, spirited speedster hero, a loyal team of friends, and a colorful cast of villains—including a telepathic gorilla! Three seasons available.

Mudbound (2017, not rated), Dee Rees’s drama of two families—one white, one black—living and farming in the poverty of the Mississippi Delta in the 1940s, debuted at Sundance and won numerous awards on the film festival circuit. Carey Mulligan, Garrett Hedlund, Jason Clarke, and Mary J. Blige star.

The Oscar-nominated Lion (2016), based on a true story, stars Dev Patel as a lost boy in Calcutta adopted by Australian parents (Nicole Kidman and David Wenham) who goes searching for his lost family in India.

Meryl Streep is the worst singer who ever lived in Florence Foster Jenkins (2016, PG-13), an unexpectedly tender and compassionate comedy based on a true story.

And here are a few more suggestions:

It’s a great time to catch up with The Crown, the drama about the life of Queen Elizabeth created by Peter Morgan and starring Claire Foy as the young Queen. The second season begins in December.

Alias Grace, the based on historical novel by Margaret Atwood, dramatizes the true story of a servant girl (Sarah Gadon) convicted of murder in 19th century Canada in a six-episode series.

The intimate and introspective drama Rectify follows the life a man (Aden Young) released into the world after spending 19 years—over half of his life—on death row for a crime he may not have committed. It’s powerful and moving and self-contained in 30 episodes over four seasons.

The superior Canadian crime drama Intelligence: The Complete Series (2006-2007) explores the intersection between the Vancouver crime underworld and the Canadian Security Intelligence Service. The entire 20-episode series is available.

And you can always revisit your favorite episode of the BBC Sherlock, starring Benedict Cumberbatch and Martin Freeman as Holmes and Watson in a modern take on the characters.

Winona Ryder and Susan Sarandon star in Gillian Armstrong’s Oscar-nominated Little Women (1994, PG), held up as the best film version of the novel by many fans.

Once it was an annual TV event for the family. Now the original The Wizard of Oz (1939, G), starring Judy Garland skipping down the yellow brick road, is streaming on Amazon.

Classics: Billy Wilder’s Some Like it Hot (1959, not rated), starring Tony Curtis and Jack Lemmon as musicians in female drag and Marilyn Monroe as an unlucky-in-love singer, was voted the best American comedy of all time in a poll conducted by the American Film Institute, and William Powell and Carole Lombard star in the sparkling screwball comedy My Man Godfrey (1936).

Charlie Hunnam and Robert Pattinson star in James Gray’s The Lost City of Z (2016, PG-13), which dramatizes the true story of British explorers in the uncharted jungles of Bolivia. A grand adventure of early 20th century exploration and a savvy portrait of western arrogance, it is vivid and dreamy and mesmerizing.

20th Century Women (2016, R) stars Annette Bening as a single mother of a teenage boy determined to give him good life lessons with the help of Elle Fanning, Greta Gerwig, and Billy Crudup.

Cynthia Nixon is Emily Dickinson in A Quiet Passion (2017, PG-13), an intimate drama from Terence Davies.

The documentary Obit. (2016, not rated) profiles the staff obituary writers of The New York Times and the increasingly rare art form they keep alive (so to speak) on a daily basis.

Amazon now has all five seasons of The Americans, the drama of two Soviet spies posing as ordinary suburban parents and the toll the stress takes on the family. It’s one of the best shows on American TV today.

There are also two seasons of Mercy Street, the PBS drama set in an army hospital in Union-occupied Virginia during the American Civil War.

Star Trek: Beyond (2016), the third film in the “when they were young” reboot, delivers a warp-speed adventure that leans on the youth, energy, and chemistry of the cast (PG-13). (Amazon Prime and Hulu)

Anne Hathaway is a different kind of Cinderella in Ella Enchanted (2004, PG), a playful twist on the classic fairy tale (Amazon Prime and Hulu)

Mickey Rooney co-stars in the gorgeous family-friendly “boy and his horse” adventure The Black Stallion (1979, G) (Amazon Prime and Hulu).

Jodie Foster’s Home for the Holidays (1995, PG-13) with Holly Hunter and Robert Downey Jr., is a comedy for the Thanksgiving family gathering (Amazon Prime and Hulu).

And, of course, Airplane! (1980, PG) has my vote for the funniest film ever made (Amazon Prime and Hulu).

Arrival (2016, PG-13), starring Amy Adams as a linguist making first contact with an alien race with no spoken language, is both a brainy science fiction drama and a touching human story. It was nominated for eight Academy Awards (Amazon Prime and Hulu).

Tuck Everlasting (2002, PG), based on Natalie Babbitt’s classic young adult novel, stars Alexis Bledel as the sheltered teenager who discovers a family both blessed and cursed with eternal life.

The Rocketeer (1991, PG) is a charming comic book movie with the nostalgic charge of an old Hollywood adventure.

You can always spend your day off seeing how someone else does it with Ferris Bueller’s Day Off (1986, PG-13).

And Hulu has plenty of family-friendly TV as well, from the Emmy-winning musical series Glee to the cult animated series Futurama from “The Simpsons” creator Matt Groening to the original Full House.

Winter’s Bone (2010, R), a coming-of-age survival story set in the crime and poverty of the Ozark Mountains, features a superb break-out performance by Jennifer Lawrence and won the Grand Jury Prize winner at the Sundance Film Festival.

Hulu’s original series The Handmaid’s Tale, based on the novel by Margaret Atwood, stars Elisabeth Moss as an enslaved women struggling to retain her identity in an oppressive dystopian dictatorship. It’s one of the best new shows of the year and you might even be able to see the entire ten-episode first season over the Thanksgiving weekend.

Try out a new service

Most streaming services offer a trial period to entice new customers. If you’ve got a few days to fill with movies and/or peak TV, why not try out one? Unlike the big three, most of the smaller services are targeted to more specialized interests. Here are a few (but by no means all) choice services that might serve your interests. Some of them are also available as add-ons to existing Amazon Prime and Hulu subscriptions.

For cinephiles and fans of classic and foreign movies: FilmStruck / The Criterion Channel (two weeks free).