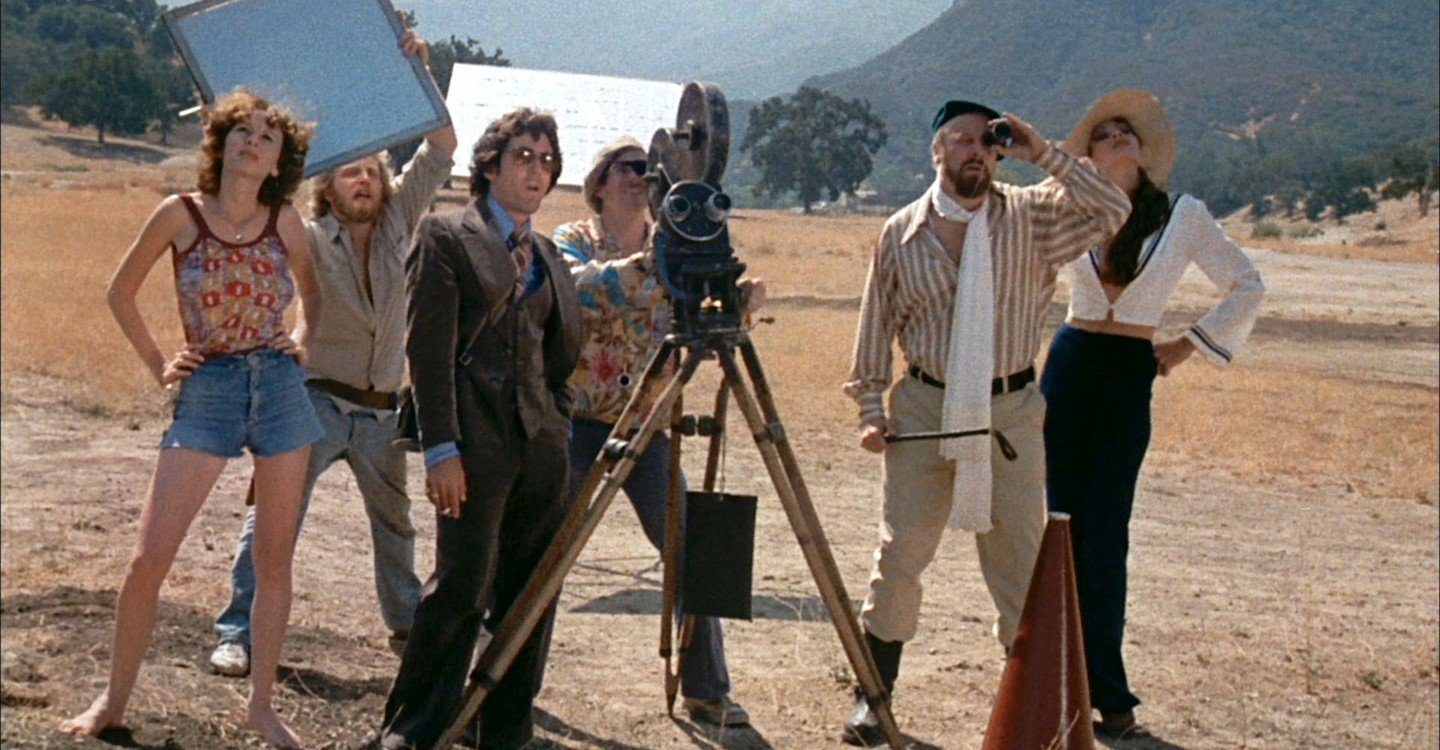 Joe Dante and Allan Arkush graduated from the trailer department of Roger Corman’s New World Pictures with their feature film debut Hollywood Boulevard (1976), an affectionate tribute to (what else?) the kinds of exploitation movies that Corman was churning out.

New World starlet Candice Rialson is surprisingly funny as the Midwest blonde with dreams of Hollywood who threatens the reigning queen B (a bitchy and vain Mary Woronov) of the lot. Fellow filmmaker Paul Bartel (Death Race 2000) is hilarious the megaphone-wielding, motivation-obsessed director churning out a different piece of low budget schlock every week for poverty row studio Miracle Pictures. Their motto: “If it’s a good picture, it’s a Miracle!”

The plot, about a masked killer knocking off the young starlets, is little more than device to work in a collection of clips from other New World pictures. Scenes were cribbed from depression era gangster film Big Bad Mama, the shot-in-the-Philippines women-in-prison movies The Big Doll House and The Big Bird Cage (blatantly and unconvincingly intercut with Southern California footage), and the sci-fi thriller Death Race 2000, among many, many others. Recycling action footage from other productions was business as usual for producer Corman’s low budget productions but this took the practice to a whole new level. Dante and Arkush, who had honed their editing skills cutting trailers for Corman’s releases, rose to the challenge with equal parts ingenuity, insanity, and chutzpah.

Though ragged and silly, Hollywood Boulevard is crammed with car crashes, fiery explosions, gunplay, gratuitous nudity, movie in-jokes, absurd sight gags, and Dick Miller as a shyster agent with a heart of gold named Walter Paisley (a tribute to his role in Corman’s cult black comedy Bucket of Blood), all accomplished on a pittance of a budget, powered by energy and corny humor, and directed with love.

Joe Dante, Allan Arkush, and producer Jon Davidson team-up on the DVD for a fun-filled commentary track to explain how tag-team directing works and exactly what clips were used where (“Anything we could find in Roger’s garage we put into the picture”). They disparage the work with self-effacing remarks throughout, but as they describe how Roger Corman was actually upset by a scene where a starstruck actress becomes disenchanted while watching her first picture (at a drive-in, no less), it lends a little credence to their claim: “The way they make movies in this picture is the way they made movies at New World.” The DVD also features a live performance by Commander Cody and His Lost Planet Airmen and a gallery of trailers from many of the films whose scenes were borrowed by the directors.