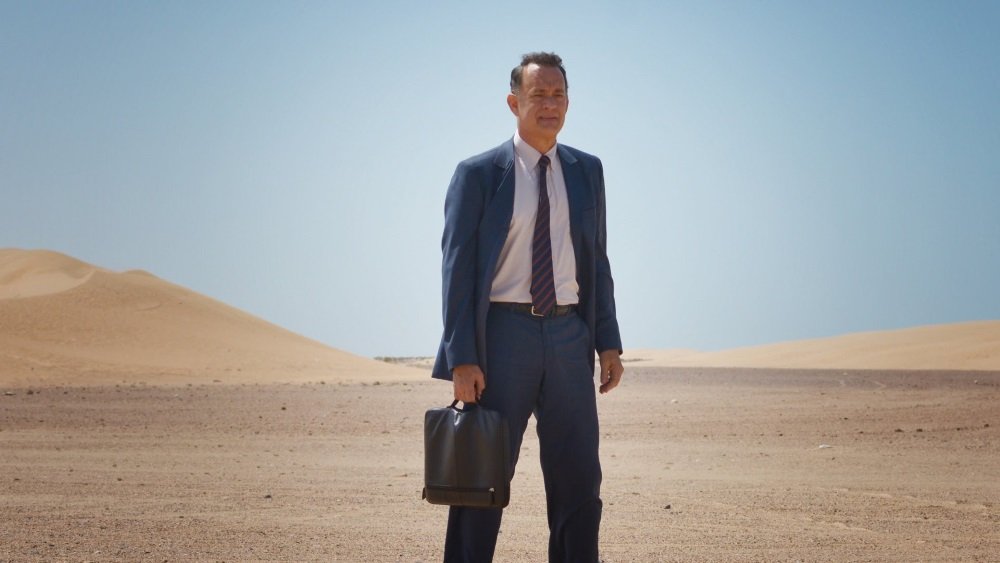 You could call A Hologram for the King (2016) a mid-life crisis drama, which is true enough, but it is really a crisis of purpose and identity for an old-school middle-aged businessman trying to remain relevant in the modern world.

Tom Hanks is former golden boy executive Alan Clay, whose reputation went down in flames decades ago when outsourced the manufacturing center of an American brand name to China and paved the way for its extinction. Divorced, practically broke, the American Dream now a hazy nightmare (the prologue is a hilarious meta-music video with Hanks asking “How did I get here” via the Talking Heads’ “Once in a Lifetime” as his beautiful wife and beautiful home vaporize around him), he’s now grasping at his last chance for professional redemption (not to mention the college money he is determined to earn for his daughter, who he dotes on).

He’s out to sell a high-tech communications system to a Saudi king for his city of the future, a modern ghost town in the desert that seems half-mirage to begin with, especially with its titular king constantly MIA for their scheduled presentations. Jet-lagged, out of his element, and a full hour out of the magic kingdom, he’s stuck in a Groundhog Day-like loop of missed wake-up calls, cancelled appointments, and blithe humiliations until he’s had enough smiling dismissals and strides right past reception to see what’s really behind the curtain. It’s just another step in breaking out of the life that left him adrift and finding a new bearing.

It’s adapted from Dave Eggers’ novel by filmmaker Tom Tykwer, who brings an imagination more sly than spectacular to his direction, as well as compassion, understanding, and a sense of humor, and he anchors the entire enterprise on Hanks’ performance as the American every(business)man in a situation that borders on the surreal. Alan is part of an obsolete business culture, the salesman who makes a personal connection as part of the business transaction, and he’s selling the very technology that is making him obsolete.

But he’s also warm and funny and genuinely likes to talk to people and make connections: his good-natured driver (Alexander Black), a Danish contractor (Sidse Babett Knudsen), and finally (after a hospital visit to treat a worrying lump) his surgeon (Sarita Choudhury), a professional woman in a culture seesawing between modernity and archaic ideas of sexual roles. They could have easily been cultural stereotypes there to prop up the American’s self-esteem but they have their own lives and issues. Alan enjoys slipping out of his bubble of a world and being welcomed in theirs and Hanks has that seemingly effortless ability not simply to make those connections real, but to slip into their rhythms as he loosens up. He’s spent so long trying to be what people expect that he’s practically lost himself under his projected image. It’s a real pleasure to see him fumble through those expectations and reconnect with himself.

Also on Blu-ray and DVD, with three featurettes, and on SVOD through Amazon Video

, iTunes, GooglePlay and/or other services. Availability may vary by service.
A Hologram For The King [DVD + Digital]

A Hologram For The King [Blu-ray + Digital HD]