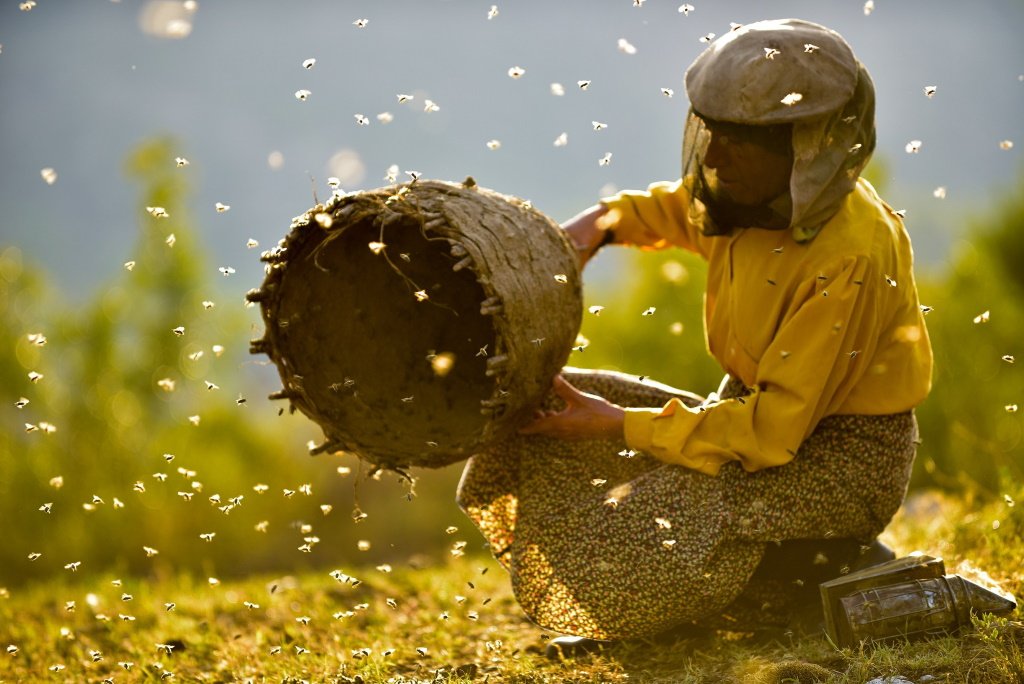 The beautifully-photographed documentary “Honeyland” (Macedonia, 2019, not rated, with subtitles) brings us into the life of a solitary beekeeper in the remote mountains of Macedonia and the disruption to her way of way life when a family settles nearby. It has won awards all over the world, including three at the Sundance Film Festival, and has been nominated for Oscars in documentary and international film categories: the first film ever to do so. It streams on Hulu.

“For Sama” (2019, not rated, with subtitles), another Oscar-nominated documentary, is the portrait of a young mother in Aleppo during five years of war. It previously won awards in festivals all over the world, including Cannes. Streams on Amazon Prime Video.

“Pain and Glory” (Spain, 20198, R, with subtitles), Pedro Almodovar’s drama about a director reflecting back on his life, earned Oscar nominations for leading actor Antonio Banderas (who already won a best actor prize at Cannes and at the European Film Awards) and for best international feature. Cable On Demand and VOD, also on disc and at Redbox.

The complete second season of “Shrill,” based on Lindy West’s book and starring Aidy Bryant a young woman struggling to be herself in a world that wants to define her, is now on Hulu.

Must see TV: Timothy Olyphant is a cowboy of a U.S. Marshall in the coal mining culture of Kentucky in “Justified: Complete Series” (2010-2015), the terrific rural crime drama based on an Elmore Leonard story. Walton Goggins costars in this contemporary western of family grudges, backwoods meth labs, and interstate crime deals. 78 episodes.

Cult pick: David Lynch directs and stars in the surreal short film “What Did Jack Do?” (2020, not rated) as a detective grilling a capuchin monkey suspected of murder. Streaming on Netflix.

Tamara Taylor and J.C. MacKenzie are monster hunters hiding their identities from their teenage kids in “October Faction” (2020, not rated), a supernatural fantasy series based on the comic book by Steven Niles. Also new:

“The Goop Lab with Gwyneth Paltrow” (2020) is essentially a six-part infomercial for Paltrow’s lifestyle brand of self-help and homeopathic products.

International affairs: “A Sun” (Taiwan, 2019, with subtitles), a family drama of two sons and great expectations turns on its head, won five Golden Horse Awards and makes its American debut on Netflix.

True stories: the six-part series “Pandemic: How to Prevent an Outbreak” explores the ways influenza evolves and looks to the future of viral outbreaks while “Rise of Empires: Ottoman” looks back at the past with a mix of documentary and dramatic recreations.

International TV: a young woman in 19th century Malaka agrees to marry to deceased son of a wealthy couple in the six-episode limited series “The Ghost Bride” (Malaysia, with subtitles), based on the novel by Yangsze Choo. Also new:

Kid stuff: “How to Train Your Dragon: Legends” (2011, TV-PG) is a trilogy of three animated short film spin-offs from the feature film franchise. Also new:

Jessica Chastain is “Miss Sloane” (2016, R), a high-powered lobbyist who takes on the gun lobby in this drama of cold-blooded politics and morality for sale. Gugu Mbatha-Raw, John Lithgow, and Mark Strong co-star.

True stories: The Oscar-nominated documentary “Life, Animated” (2016, PG), based on the book by Ron Suskind about how he connected with his autistic son through Disney animated films, is fine for the entire family.

Streaming TV: Jason Jones and Natalie Zea are back in the comedy “The Detour: Season 4.”

You can also start the catch network shows “9-1-1: Lone Star” and “Outmatched” and the Freeform family drama “Everything’s Gonna be Okay,” plus new seasons of “Grown-ish” and “The Bold Type” and the cult British reality series “Love Island.” Episodes available on Hulu a day after their respective TV debuts.

“Godzilla: King of the Monsters” (2019, PG-13) continues the American take on the Japanese giant monster franchise with battles against King Ghidorah (aka Monster Zero) and Rodan, with Godzilla ally Mothra joining the fray.

“Tammy and the T-Rex: Gore Cut” (1994/2019, not rated) restores bloody effects to a silly PG-13 high school horror starring young Denise Richards and Paul Walker with an animatronic dinosaur with the brain of a teenage boy. No, it’s not very good, but you’ve surely never seen anything like it before. From the director of “Mac and Me.”

Criterion Channel presents 18 films “Starring Burt Lancaster,” from “I Walk Alone” (1947) to “Local Hero” (1983, PG). Among the many highlights are the multiple Oscar-winner “From Here to Eternity” (1953) with Deborah Kerr and Frank Sinatra, the Hollywood noir “Sweet Smell of Success” (1957) with Tony Curtis, Burt Lancaster’s Oscar-winning performance in “Elmer Gantry” (1960), and his Oscar-nominated performance in “Atlantic City” (1980, R), costarring Susan Sarandon.

Also new on are seven films “Starring Danny Kaye,” seven features “Directed by Jane Campion,” and the French film noir “Panique” (French, 1946, with subtitles), which is presented with a bonus documentary and interviews.