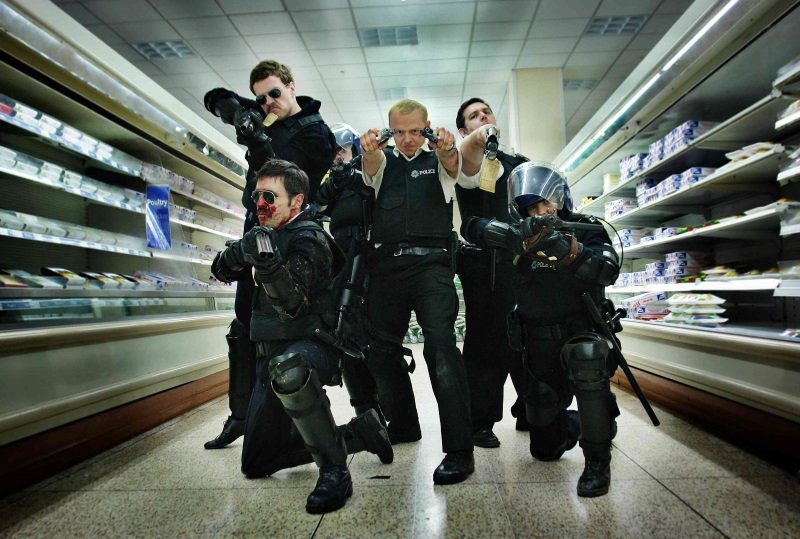 A couple of Thanksgivings ago, as the family hung out the few hours before dinner, my brother and I started telling my dad why he would like Hot Fuzz (2007), a film that otherwise doesn’t appear to be his cup of English tea. It was from the guys who made Shaun of the Dead and this one had fun with the American buddy-cop action film genre. The reason I thought my Dad would love it, apart from the film’s decidedly British sense of humor, was that it dropped the action movie parody within the another genre: the British murder mysteries set in sleepy rural towns with eccentric old folks. My parents love shows like Inspector Morse and Midsomer Murders and Foyle’s War (as do I) and apparently so do Edgar Wright (director, co-writer) and Simon Pegg (co-writer/star), who show a lot of affection for the cozy mystery tradition in their parody.

Simon Pegg was a schlub roused to action in Shaun of the Dead. Here he’s wonderfully crisp and confident as a too-square-to-be-true super cop dumped into a sleepy little town and saddled with a sad-sack slob of a partner (Nick Frost) whose training consists of careful study of Hollywood action blockbusters. It’s a two-hour film but it moves forward with the momentum of a high speed chase and the madcap shoot-outs that erupt in the cute little country village, with dotty old townfolk and eccentric small town clichés who yank armories out of handbags and the boots of their little commuter cars, is both a surreal parody of urban action spectacle and seventies TV cop clichés and a marvelous bit of comic action in its own right.

Timothy Dalton is pitch perfect as a community leader and local supermarket mogul with a smug smile, a glad-handing exuberance, and a car radio permanently (at)tuned to ironic commentary, part of a clutch of grand old veterans of British film and TV that includes Paul Freeman, Anne Reid, Billie Whitelaw, Stuart Wilson, Edward Woodward, and Jim Broadbent as the Chief. They look they’re having fun spoofing their stock-in-trade.

Give Wright and Pegg credit for stirring those flavors together so smoothly. It’s one for the fans, but in this case it includes fans of those very British mysteries they spoof. It’s an affectionate parody, it’s awfully funny, and it is wicked clever. And my dad loved it too.

On Blu-ray and DVD with the 28-minute featurette “The Fuzzball Rally: U.S. Tour Piece” with the fun-loving trio of Wright, Pegg and Frost barnstorming American with live appearances at preview screenings, goofing through interviews, and flushing birthday cakes down hotel toilets across the country. Also features commentary by director Edgar Wright and co-writer/star Simon Pegg, a couple of dozen deleted/alternate scenes (explore the Bonus screen for more), 10 minutes of outtakes, alternate storyboard and trivia tracks, and “Hot Funk,” a montage of key scenes with alternate dialogue for TV (“Peas and rice!”).

The Blu-ray and 3-disc DVD special editions adds four (4!) additional commentary tracks: one by a pair of genuine cops (or “Real Fuzz,” as the menus put it), one by the actors play the Sandford cops (including Jim Broadbent), one by a quartet of “Sandford Village People” (including Timothy Dalton and Edward Woodward, who are great company and tell the best stories), and one with Quentin Tarantino joining director Wright in a movie geek-fest conversation (which drifts into an animated appreciation of John Wayne in “Branigan,” among other diversions), plus a “Fuzz-o-Meter” subtitle trivia track option and a Storyboard image track for film-to-storyboard comparisons. Also new is the 30-minute featurette “We Made Hot Fuzz,” an evidence locker full of behind-the-scenes featurettes, and dozens of video blogs. “The Fuzzball Rally: U.S. Tour Piece” from the original DVD release is expanded to over an hour of video footage of Wright, Pegg and Frost barnstorming America and comes with an optional commentary track. And for obsessive fans only there is “Dead Right,” Edgar Wright’s first cop film. An amateur production shot on video by Wright with his school chums in 1993 when Wright was 18, it makes its DVD debut with your choice of two commentary tracks. The digipak case folds out vertically, like a police notepad: high-concept yet simple. Brilliant!