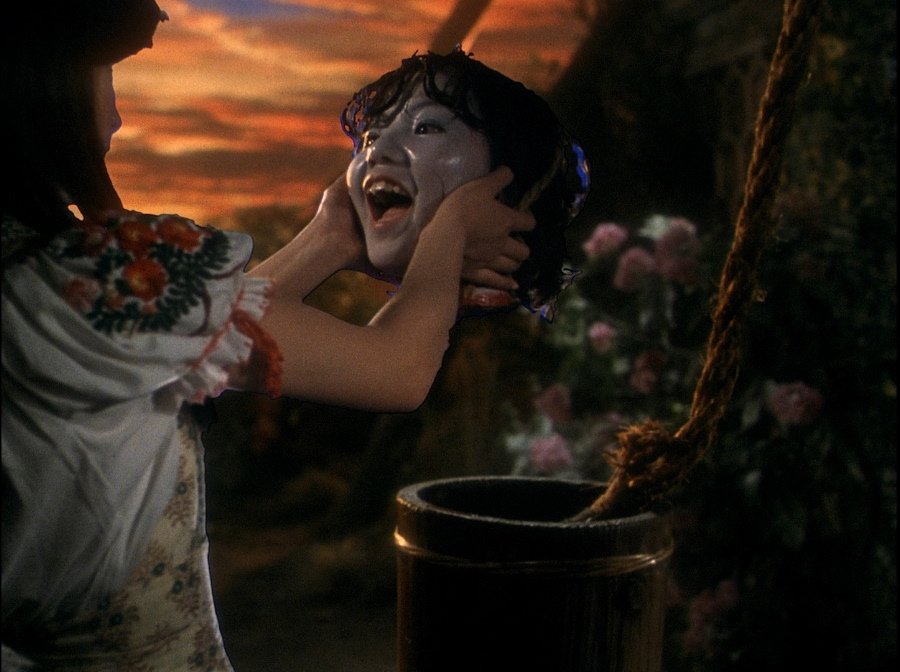 I can’t begin to find the words to describe House (1977), aka Hausu, an unclassifiable Japanese haunted house/high school romp/demon killer/surreal fantasy film from Nobuhiko Obayashi. Made in 1977 and recently revived and released to the rest of the world, it’s the archival cult find of the decade: a candy-colored style bomb of horror movie more jaw-droppingly unreal than scary, an experimental piece of pop-art genre filmmaking that is cartoonish in its graphic expressionism.

Seven high school girls skip out of a romantic manga existence and into the demonic funhouse of a family home owned by the seemingly benign spinster auntie (Yôko Minamida) of the girl known (at least in subtitles) as Gorgeous (Kimiko Ikegami). “Mac, you sure look tasty, being round and all,” remarks the aunt to the chubby girl (Mac is short for stomach). Sure enough Mac is the first to disappear into this hungry, hungry house, which proceeds to dismember and devour the entire cadre of teenage youth in cartoonish scenes of carnage that are more performance art pieces that sadistic exploitation. The limbs and fingers of one girl (animated with the cut-and-paste images and blue-screen effects) appear to dance in celebration at their liberation. There’s no effort made to scare the audience. Nobuhiko just wants to blow your mind.

It’s not properly a horror comedy, though it is hysterically funny in places, if only by virtue of its exaggeration of genre tropes and utterly unexpected creative turns. I guess you could call it an absurdist haunted house tale, but you could go on forever thinking up comparisons (a metaphysical Hansel and Gretel with high school girls, a funhouse of a demon ghost film with a sensibility between musical comedy, slapstick cartoon and acid flashback horror movie) and still leave room for more.

It defies description because the invention—stylistic, narrative, visual, conceptual, aural—never ends. The film never stops moving, the screen is never bereft of creative detail stuffed into every corner, and the soundtrack piles on music and sound effects beyond atmospheric backdrop to become just as prominent as the imagery, another little detail to the mosaic of the world of the film. More than anything, this mad manga fairy tale (co-written by the director’s daughter) is a psychedelic blast of creative invention running wild though the conventions of a horror movie.

Is it good? Sure, but the question seems to miss the point. It’s like nothing you’ve ever seen, or maybe more accurately it’s like a whole lot of wonderfully weird things you’ve seen, from young romance Technicolor melodramas to Mario Bava horrors to Looney Tunes cartoons and more, blended into a surreal puree and poured into a funhouse of cinematic delights. It’s amazing.

The imagery is weird and wild and fantastical enough that it should be fine for teens (at least those who don’t mind subtitles).

and other services. Availability may vary by service.
House (The Criterion Collection) [DVD]

Criterion’s gorgeously produced DVD and Blu-ray editions feature the director’s 1966 experimental film “Emotion,” a new interview featurette with the director and writers and a video appreciation by director Ti West, plus a booklet.