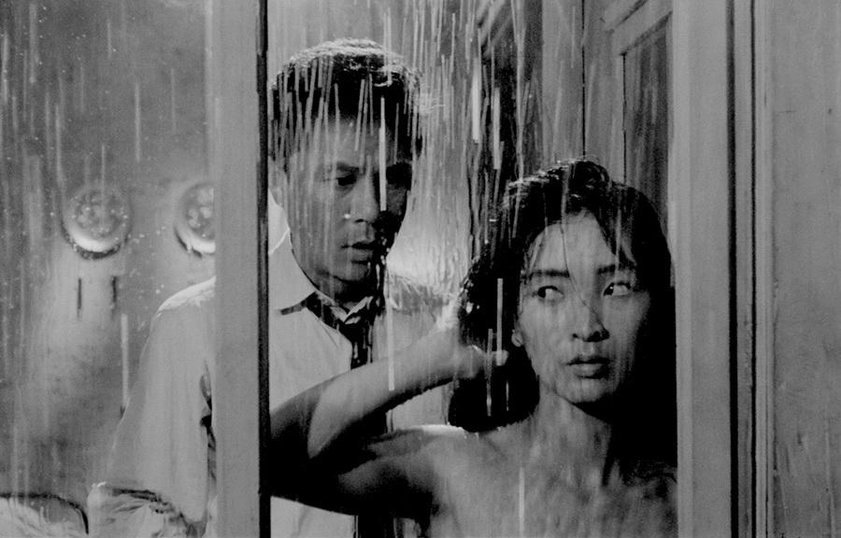 Kim Ki-young’s The Housemaid (South Korea, 1960) is a classic of South Korean cinema but until Criterion released the film on disc in 2013 it was largely unknown (or at least unseen) to even the most dedicated cinephile apart from its inspiration for Im Sang-soo’s 2010 remake. As I discovered, the two films couldn’t be more different.

Where the remake was controlled and icy, a precise portrait of privilege and power in a tale of the corrupt rich destroying the lives of the helpless poor, Kim Ki-young’s original is a wildly melodramatic story of middle class ambition set almost entirely in a two-story home that becomes something of a prison as the web of desire and anxiety and loathing and social standing closes in on them. No one is innocent here, except perhaps the daughter (on crutches, recovering from an illness) and a newborn baby, and their survival seems precarious.

The husband (Kim Jin-kyu), a piano teacher, has dubious moral character but is devoted to making his family happy, the hard-working, physically fragile wife (Ju Jeung-nyeo) is just as concerned with appearances as she is with the family’s well-being, and the bratty youngest son has a sadistic streak to his mean-spirited teasing. And then there’s the young housemaid (Lee Eun-shim) who is clearly unstable from the moment a vengeful factory girl discovers her smoking in the barracks and recommends her to the family. Shake well and the pressure builds….

Kim designs the film beautifully, from the separate social spaces of the second story connected by a balcony and sliding glass doors (through which the camera peers to view the transgression of boundaries) to the central staircase where so much of the power struggle plays out, both symbolically and physically. And he uses the close quarters well, to build pressure on the increasingly savage relationships and to cut them off from the rest of the world, like a purgatory to which they’ve condemned themselves. The framing sequence plays like a barbed joke, a bit of black humor that plays like the old “happy ending” twists to mollify the production code in Hollywood films of the forties, but with an attitude that, quite literally, laughs at its very contrivance.

The original negative of this 1960 film is missing two reels and the missing footage was replaced by a very damaged and compromised release print. The contrast is night and day: most of the film looks superb, with a clean, clear image and strong contrasts in the black and white, while the replacement footage is weak, washed out, and soft. Given the state in which it was found, even that is a small miracle.

In black and white, in Japanese with English subtitles

The Criterion DVD set includes a bonus introduction from Martin Scorsese and an interview with South Korean filmmaker Bong Joon-ho.