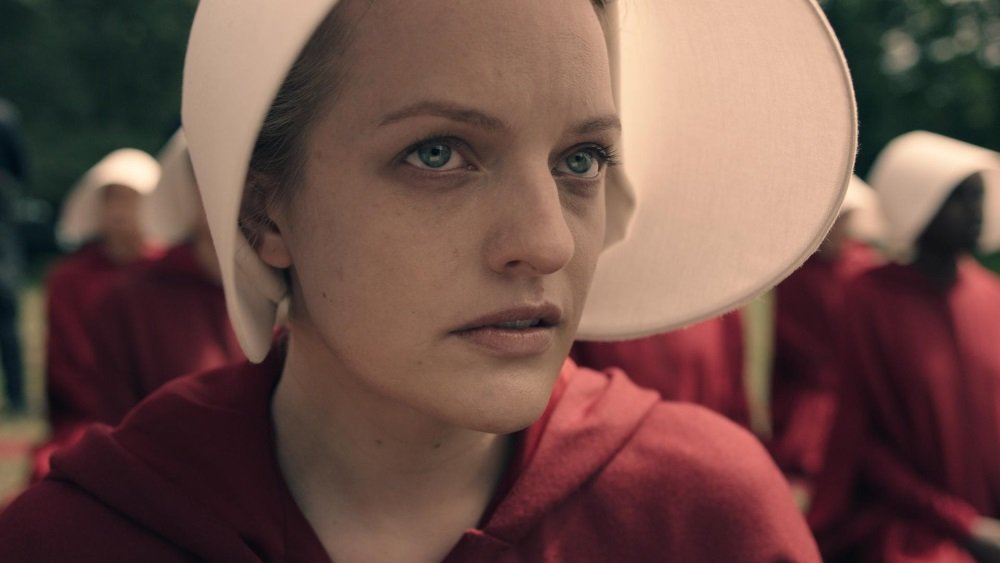 It looks like Hulu has finally found its signature original series.

The new original series The Handmaid’s Tale, based on the novel by Margaret Atwood and starring Elisabeth Moss as an enslaved women struggling to retain her identity in an oppressive dystopian dictatorship, is smart, compelling, and unnerving. The book was made into a well-meaning but disappointing 1990 film by Volker Schlondorff. The new series, developed by Bruce Miller with Atwood serving as a consulting producer, delves deeper into the experience as seen through the eyes of Offred (Moss), the name given to the wife and mother forced into sexual servitude to a leader (Joseph Fiennes) of the new patriarchal order. Alexis Bledel, Yvonne Strahovski, and Max Minghella co-star.

It’s science fiction by way of a 15th century culture of theocratic law and hypocritical leaders. In a near future where most women have been rendered infertile, the few fertile women are breading stock, treated as property at best, as if their ability to bear children is an affront to the ruling elite dress up their oppressive control in the guise of an unforgiving reworking of Old Testament judgment.

The series doesn’t make a show of connecting its portrait to the modern world, it lets those reflections arise naturally. And it is remarkably effective as the flashbacks show our characters living ordinary lives in our own reality, in which the citizens allow the slow slide toward authoritarianism until it’s too late. Based on the three episodes now available, it is one of the best new shows of the year. New episodes arrive every Wednesday. More reviews here.

“In its first season, Justin Simien’s college drama Dear White People, about black students enrolled at a mostly white college, pulls off a feat that eludes a lot of bigger, showier programs: It creates a self-contained, detailed, faintly dreamlike world that partly mirrors our own, then lets us wander around in it,” praises Matt Zoller Seitz for Vulture. “It doesn’t just have a setting and a story, it has a philosophy and a vision of life. This is so rare in any art form that the show’s less-than-subtle aspects (and there are many) feel like features rather than bugs.”

Hollywood loves movies that celebrate show business and La La Land does just that, both in its story of aspiring artists in love and in its embrace of the old-fashioned musical form with modern indie movie spirit. It won six Academy Awards, including Best Actress (Emma Stone) and Best Director (Damien Chazelle), and seven Golden Globe Awards, including Best Motion Picture: Musical or Comedy, as well as awards across the craft guilds and critics groups. But it was also a popular hit; audiences across the country and across the world embraced it. It’s nice to know that the musical still has life outside of animated movies. PG-13. Reviewed on Stream On Demand here.

Kate Beckinsale in back in black for Underworld: Blood Wars, the fifth film in the vampires-versus-werewolves series, this time with “Divergent” hunk Theo James as co-star (R). Also on Blu-ray and DVD and at Redbox.

Also new: indie drama Those Left Behind (not rated) and documentary We Are X about the cult band from Japan (R).

Queen of Katwe (2016) dramatizes the true story of an unschooled girl (Madina Nalwanga) from an impoverished village in Uganda who nurtures a talent for chess to become a world class chess champion. David Oyelowo and Lupita Nyong’o star in the uplifting and colorful Disney drama (PG). Reviewed on Stream On Demand here.

The animated family comedy The Secret Life of Pets (2016) reveals what your pets are actually up to when you leave the house (PG).

Streaming TV: The third season of Amazon’s British-American sitcom Catastrophe, about a mismatched couple brought together by pregnancy, debuts with six new episodes.

Cult: Trilogy of Terror (1975), Dan Curtis’ horror triptych, remains a minor but memorable piece of TV horror legendary among folks of a certain age for the infamous Zuni fetish doll sequence, an absurd looking creature with a relentless psychopathic drive chasing Karen Black around her apartment (not rated).

Oprah Winfrey and Rose Byrne star in The Immortal Life of Henrietta Lacks (2017), an original HBO movie based on the non-fiction book by Rebecca Skloot (not rated).

Ermanno Olmi’s The Tree of Wooden Clogs (Italy, 1978), an epic about families battling dire poverty in 19th century Italy, won the Palm d’Or at Cannes. The Criterion Channel presents the new restoration along with all the supplements featured on its recent special edition DVD and Blu-ray release.

Also new this week: all five seasons and forty episodes of the lighthearted British mystery series Pie in the Sky with Richard Griffiths solving crimes between baking dishes for his restaurant.