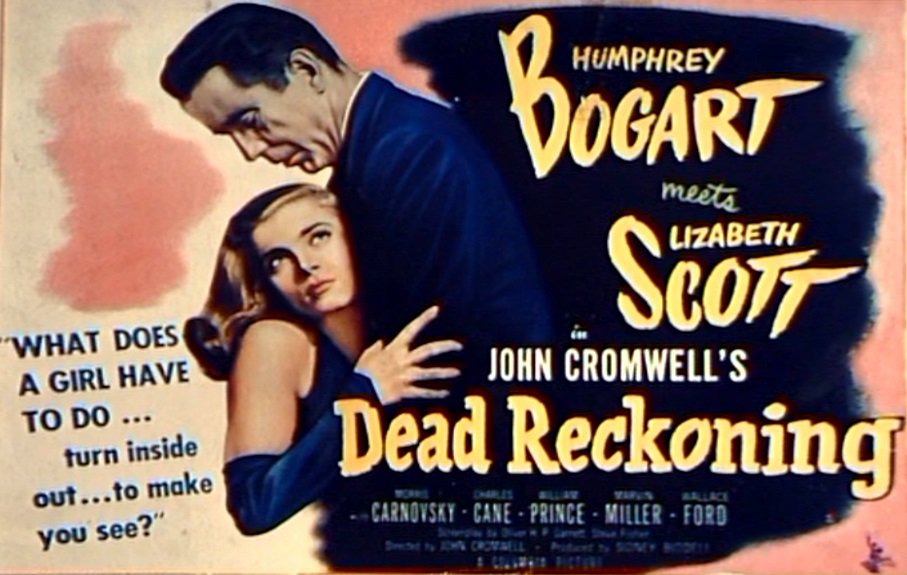 Any resemblance between Dead Reckoning (1947) and classic hard-boiled Humphrey Bogart classics The Maltese Falcon and The Big Sleep is anything but coincidental (“A guy’s buddy gets killed, he oughta do something about it,” Bogie explains in an line from the Sam Spade playbook) in this murder mystery of deception and double crosses.

Narrating in his distinctive, gravely lisp, Bogie plays a war hero who collides with femme fatale Lizabeth Scott while investigating the death of his All-American, Medal of Honor buddy. For all her ambivalence and smoky-voiced delivery, Scott is soggy next to Bogie’s tight lipped, war-hardened intensity and the B-movie roster of supporting actors (Morris Carnovsky as a finicky nightclub owner with a gambling sideline, Marvin Miller as his brutal baby-faced thug) keeps this from A-movie territory.

John Cromwell is too polite and classy a director to sleaze this up as it should be, yet the generic everytown setting and undernourished sets creates an appropriate tawdriness to the tarnished portrait of the small time hoodlums with big dreams. This minor film noir makes a thoroughly satisfying experience.

, iTunes, GooglePlay and/or other services. Availability may vary by service.
Dead Reckoning [DVD]

The DVD from Sony Picture includes a gallery of vintage advertising and trailers.