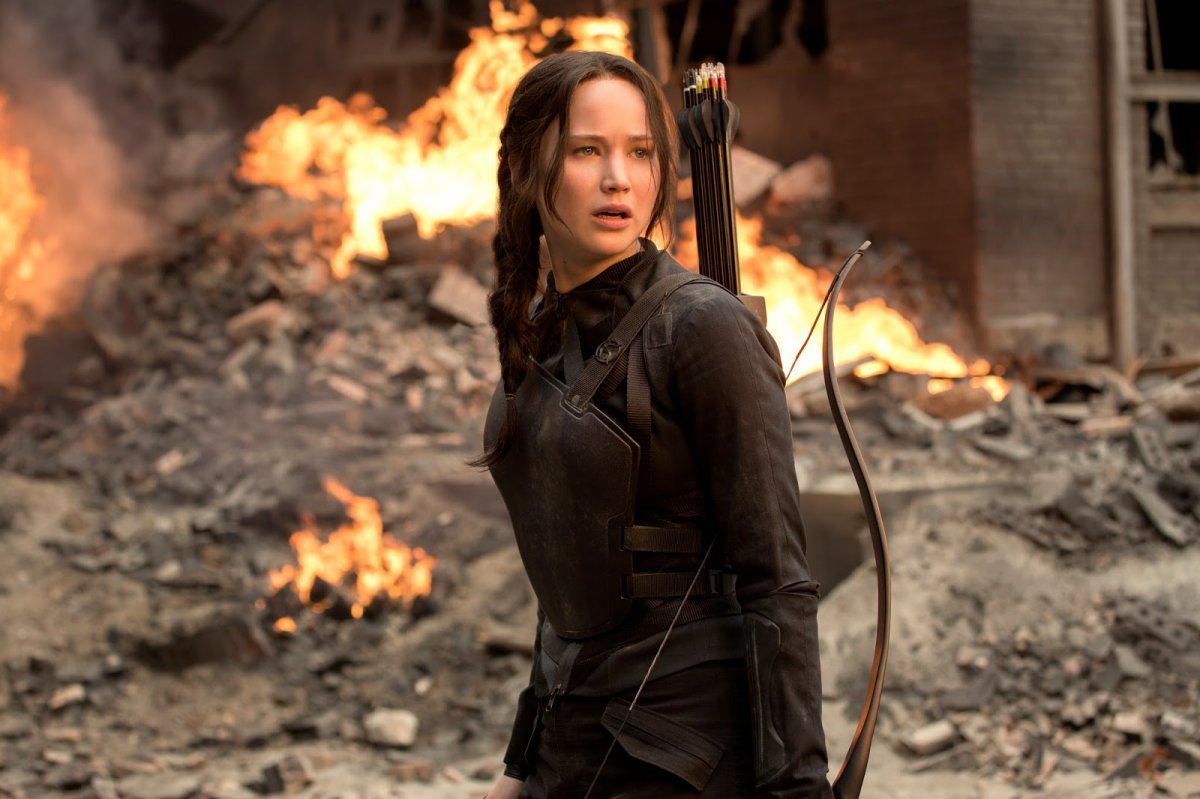 The Hunger Games: Mockingjay Part 1 (2014), the top box office hit of 2014, follows the lead of the Harry Potter and Twilight series by splitting the final book into two film installments, making this the third of four films.

For anyone who has read the books that might seem like quite a stretch, drawing out the first half of an already short novel to feature film length while including enough drama to entice viewers to return for the finale. Maybe my expectations were duly lowered but director Francis Lawrence, who took over the series from filmmaker Gary Ross and raised the bar, and screenwriters Peter Craig and Danny Strong turn out a surprisingly engaging film about rebellion, propaganda, media, and the emotional and psychological scars of war, all seen from the point of view of a young woman (Jennifer Lawrence) who becomes a symbol of resistance simply by surviving with courage, dignity, and compassion.

By this time in the saga, Katniss (Lawrence) has been rescued from the Games and the totalitarian “President” Snow (Donald Sutherland) by the rebellion, which is building its forces in underground bunkers beneath District 13, which everyone thought was bombed to cinders decades ago. Peeta (Josh Hutcherson), however, was captured and Snow and his propaganda team is using him in a propaganda campaign designed to attack the image of Katniss as the symbol of resistance.

Julianne Moore joins the series as President Alma Coin, leader of the revolution and a savvy military mind who doesn’t quite understand the power of Katniss over the hearts and minds of Panem. She’s committed but also cagey and cold as a commander, wary about her own authority as Katniss becomes the face of the revolution in a series of pointed propaganda pieces that, curiously enough, work due to the earnest, guileless authenticity of Katniss in the face of the Capitol’s cruelty. Philip Seymour Hoffman and Jeffrey Wright provide the brain trust behind Snow’s leadership and their scenes help give the film added gravity.

Extending the final book across two films is a commercial decision rather than an artistic choice and it shows. The film takes us into strategy sessions and explores the efforts to shape Katniss into a packaged symbol with telling detail that, while interesting, slows the momentum of the story, even with battle scenes and action set pieces spaced through the film. It’s not enough to smother the fire of the film but it does douse Hutchinson (who plays a brainwashing victim with the empty sincerity of a sleepwalker) and Chris Hemsworth, who gets lost in the massive cast and busy script.

Lawrence, however, burns in the role of the reluctant Joan of Arc of the rebellion. She makes us feel that anxious turmoil of a teenage girl thrown into a battle she didn’t choose, both in her heartfelt response to the brutal repression and reprisals of the Capitol and in the private horror of the psychological warfare waged by President Snow to break her spirit and resolve. As the film keeps reminding us, she’s used by both sides and she knows it. But she also understands the stakes of the war. That’s a lot for one person, let alone a teenage girl, and Lawrence doesn’t let us forget it. And her haunting rendition of the song “The Hanging Tree” will linger in your mind long after the film is over.