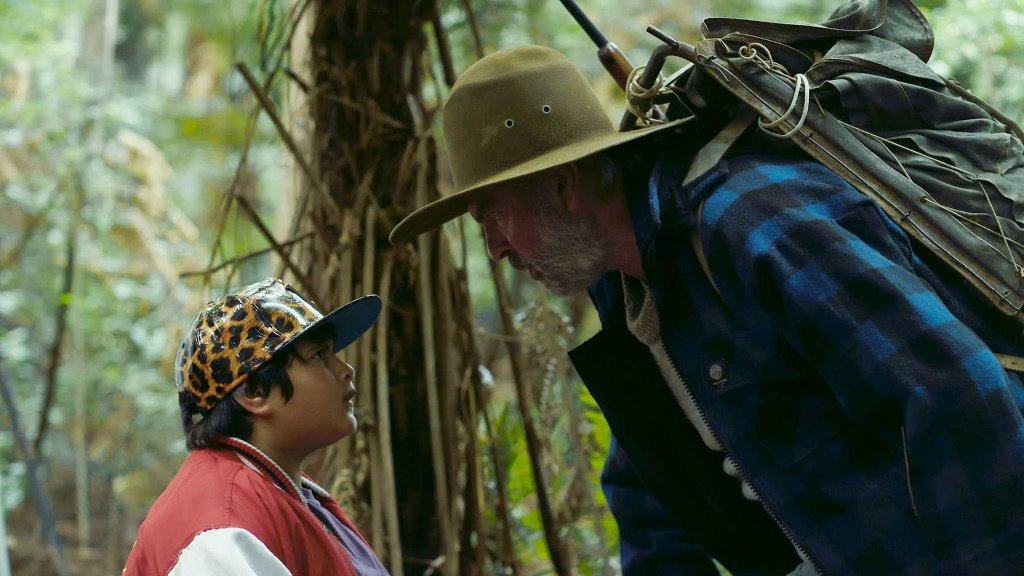 Based on title alone, you might expect Hunt for the Wilderpeople (2016) to follow the mockumentary spoofing of Taika Waititi’s previous film What We Do in the Shadows, his deadpan portrait of ancient vampires as eternal idiots on the fringes of Wellington nightlife. In fact it’s a coming of age comedy with a heartwarming soul that never slips into easy sentiment.

Julian Dennison is Ricky, a teenage foster kid steeped in rap music lyrics on his last chance for a home placement, and the farm on the edge of the bush is not this city kid’s idea of the thug life. Clad in hilariously hideous cat sweaters, Bella (Rima Te Wiata) looks like she’s going to smother Ricky in try-too-hard affection and tone-deaf small talk, and the eternally glowering Hec (Sam Neill), who prefers to slip off to hunt wild boar, endures Ricky’s presence for Bella’s sake.

As these things tend to go, they slip into familial affection. Bella is a smart cookie with authentic affection and a savvy understanding of Ricky’s suspicion and while Ricky isn’t the sharpest tool in the shed, neither is he a cliché of the urban kid lost in the country. But this journey doesn’t take any familiar paths, and it’s not just the offbeat sense of humor and supporting cast of eccentrics. This sweet, funny comedy is built on loss and sorrow and the need for family, and it never sacrifices one for the other. These are people orphaned by the world and they find a family in one another, but nothing is forever. Hec is a crotchety loner who scowls as sentimentality and grumbles when Bella nudges him to show affection but while he’s not a people person, he loves deeply and feels loss profoundly. Neill unleashes his grief in a moment so primal and anguished that for a moment you forget this is a comedy.

That’s the moment that Hunt for the Wilderpeople heads straight for the bush and Ricky and Hec become unlikely outlaws on the run. They’re New Zealand’s answer to Thelma and Louise on foot: Problem Child and Grumpy Old Man, New Zealand’s most wanted eluding cops, search parties, and an overzealous child welfare agent (Paula House) who chants “No child left behind” as threat rather than a promise and would rather be commanding a SWAT unit. This comedy of errors weaves between absurdity and tragedy and you’re never quite sure how it’s going to veer into either direction. It can put an edge on the laughs at times, but it also makes you feel that they’ve earned their right to a happy ending.

The film won six New Zealand film and television awards, including best picture, director, and acting nods for Dennison, Neill, and Te Wiata. And of course Waititi went on to direct Thor: Ragnarok and win an Oscar for Jojo Rabbit.

Also on disc and Digital VOD through Amazon Prime

, iTunes, GooglePlay, and other services. The Blu-ray and DVD feature commentary and a featurette.
Hunt for the Wilderpeople [DVD]

Hunt For the Wilderpeople [Blu-ray]