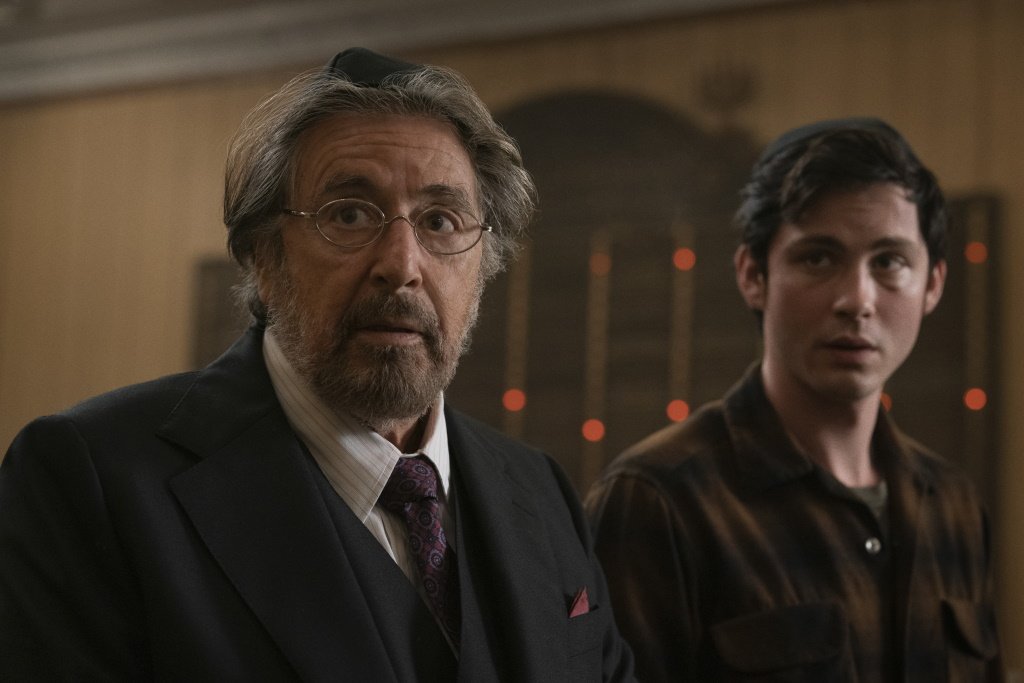 Al Pacino makes his streaming TV debut in the Amazon Original series “Hunters” (2020), a thriller with a twist of dark humor about a group of Nazi hunters in 1970s New York City executing their own brand of justice. Logan Lerman costars as the team’s newest member, a teenager whose grandmother was secretly a member, and the team includes a washed-up actor (Josh Radnor), a Catholic nun and former MI-6 agent (Kate Mulvany), a badass soul-sister (Tiffany Boone), an Asian-American Vietnam vet (Louis Ozawa Changchien), and an elderly couple who survived the camps (Saul Rubinek and Carol Kane). Don’t mistake this for history; in this world, the escaped Nazi officials are plotting to unleash the Fourth Reich in America. Think of it as a companion piece to the recently ended “Man in the High Castle,” but with more violence, lots of seventies color, and playful Tarantino-esque asides. The storytelling gets a little tangled and confused but it’s entertaining while still treating the Holocaust and the stories of the survivors with complete seriousness. It’s coproduced by Jordan Peele’s Monkeypaw Productions. Ten episodes on Amazon Prime Video.

A Mexican-American family struggles to keep their family business afloat in the comedy “Gentefied” (2020, not rated), a Netflix Original series set in the Latinx culture of Boyle Heights, Los Angeles. The show tackles issues of gentrification and cultural authenticity as the extended family tries to find a balance that will keep their taqueria open: adapt to the incoming population or embrace their roots. The show, coproduced by America Ferrera, also features healthy amount of Spanglish in the dialogue. Ten episodes on Netflix.

The beloved time traveling romantic drama “Outlander” (2020, TV-MA), which now has two couples making a life in pre-Revolutionary America, is back for its fifth season. New episodes each Sunday on all Starz platforms.

Taika Waititi’s “Jojo Rabbit” (2019, PG-13), which takes on Nazi Germany and satirizes the cult of Hitler with a sense of childlike whimsy, won the Oscar for adapted screenplay. It’s now on Cable On Demand and VOD, along with “A Beautiful Day in the Neighborhood” (2019, PG-13) starring Matthew Rhys and Tom Hanks in an Oscar-nominated performance as Fred Rogers. Also on DVD and at Redbox.

Classic pick: Francis Ford Coppola made “The Conversation” (1974, PG), an intimate thriller starring Gene Hackman as a surveillance expert whose work may have resulted in murder, between his two Oscar-winning “Godfather” films. Streaming on Amazon Prime Video.

Anne Hathaway plays a journalist plunged into the mire of the Iran-Contra scandal in “The Last Thing He Wanted” (2020, R), directed by Oscar-nominated filmmaker Dee Rees (“Mudbound”) from the novel by Joan Didion. Willem Dafoe, Rosie Perez, and Bern Affleck co-star. It comes direct to Netflix one week after a limited theatrical release.

Uzo Abuda (“Orange is the New Black”) plays a single mother challenging the system in “Miss Virginia” (2019, TV-14), a drama based on a true story.

The docu-series “Babies: Part 1” (2020, not rated) takes audiences through the rapid development of infants in the first year of life.

“System Crasher” (Germany, with subtitles, not rated) follows an angry, emotionally needy 9-year-old girl from a broken family and the anger management therapist trying to place her in a loving home. The film festival award winner makes its American debut on Netflix.

International TV: the new manager of an Argentine soccer team is hired to take on organized crime surrounding the club in “Puerta 7: Season 1” (Argentina, with subtitles). Also new: “Spectros: Season 1” (Brazil, with subtitles) is a supernatural mystery about a clash between Brazilian witchcraft and Japanese Shinto spirits in a Japanese neighborhood of São Paulo.

International affairs: a young girl abducted by a rebel army in Sub-Saharan Africa tells her story in “War Witch” (2012, not rated, with subtitles), an Oscar-nominated foreign language feature.

“American Ultra” (2015, R) turns the “Bourne Identity” into a violent black comedy when an amiable stoner (Jesse Eisenberg is attacked by a hit squad and discovers he’s a sleeper agent with a killer instinct. Kristin Stewart co-stars (Prime Video and Hulu).

You can stream the season premieres of network shows “American Idol: Season 3” and “Good Girls: Season 3” and the debut of the animated comedy “Duncanville.”

Kevin Costner is a CIA assassin whose latest assignment is complicated by the unexpected arrival of his moody teenage daughter (Hailee Steinfeld) in “3 Days to Kill” (2014, PG-13).

“Last Week Tonight with John Oliver” is back on all HBO platforms. Streaming versions available a day after the Sunday cable premiere.

Time travel meets murder mystery “Beforeigners: Season 1” (Norway, with subtitles), set in a world where people from centuries past have been transported to the present. It’s the first HBO Europe original series from Norway. All six parts available exclusively on HBO streaming services.

The nonfiction series “Wrong Man: Season 2,” which investigates convicted men who claim they are innocent, is now rolling out on all Starz platforms. Also new:

“Playing for Keeps,” an Australian drama about the wives and girlfriends of professional soccer players, rolls out with new episodes every Thursday. Also new:

MHz presents the drama “House of Rochevilles” (France, with subtitles), which follows a family in a Bordeaux vineyard through the 20th century, and the crime drama “Tatort: Lindholm – Season 1” (Germany, with subtitles). New episodes of both shows each Tuesday.

Criterion Channel celebrates Black History Month with “Pioneers of African-American Cinema,” a collection featuring over two dozen feature films and shorts made by black filmmakers for black audiences in the first half of the 20th century. Includes groundbreaking films directed by Oscar Micheaux, allegorical spiritual dramas by James Gist and Eloyce Gist, non-fiction studies by Zora Neale Hurston, genre pictures from director/actor Spencer Williams, and the highly entertaining action picture “The Flying Ace” (1926). FYI: Some (though not all) of these selections are also streaming on Netflix.

Also new is a spotlight on films “Directed by Allison Anders,” including the coming of age drama “Gas Food Lodging” (1992, R) with Fairuza Balk and Ione Skye and the searing “Things Behind the Sun” (2001, R) starring Kim Dickens;