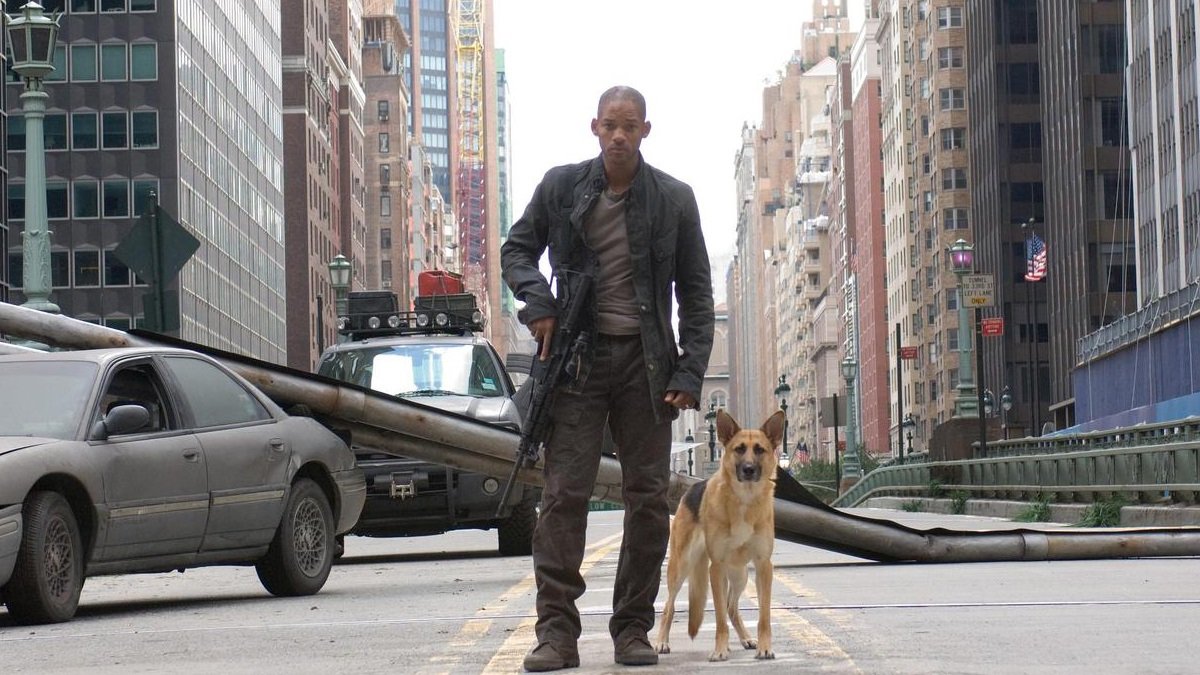 I Am Legend (2007), the third official adaptation of Richard Matheson’s novel (and the first to carry the novel’s name) about the last human in Earth after a plague turns the survivors into undead creatures, strips the story down to essentials.

This version, directed by Francis Lawrence, focuses on the visceral experience of roaming an empty New York City, a metropolitan ghost town slowly being reclaimed by foliage and wildlife (ostensibly escaped from the zoo and running wild through the abandoned streets). And, of course, feral packs of former humans mutated into zombie-like creatures by a virus that has swept through humanity like a Biblical cleansing.

Will Smith is the sole uninfected human left in New York and he is magnificent in the film, teetering on the edge of sanity as he scavenges the city for food, sends out radio broadcasts in hopes to finding other human survivors, and captures the sun-shy infected for guinea pigs in his experiments to find a cure. He’s in everyman mode here – albeit the pumped up, survivalist only-man everyman – and it’s his humanity, his need for contact (making small talk with the mannequins he’s propped up around his neighborhood), and his fearsome rage that makes the film work.

It has more in common with The Omega Man (1971), the second screen adaptation of the novel, than Matheson’s original work, but it’s effective and Lawrence directs with restraint, even when it comes to the infected. While they look like characters out of a video game the way the CGI paintbox animates over the motion-capture models, Lawrence slowly reveals the nocturnal hunters to be tribal creatures and not the simple unthinking monsters. And even better is the way Lawrence draws the audience into the atmosphere of isolation and aloneness.

, iTunes, GooglePlay, Fandango, Vudu and/or other services. Availability may vary by service.
I Am Legend [Blu-ray]

I Am Legend [DVD]

The DVD features four “Animated Comics,” which use computer manipulation to make stories originally published in the “I Am Legend” comic book move. The Blu-ray and Two-Disc Special Edition DVD editions also feature an alternate cut that runs a few minutes longer. So often these alternate versions are little more than curiosities, but this one offers a genuinely alternate ending that is more interesting and provocative, better suited to the story and more in tune with the theme (if not the narrative) of the original novel.