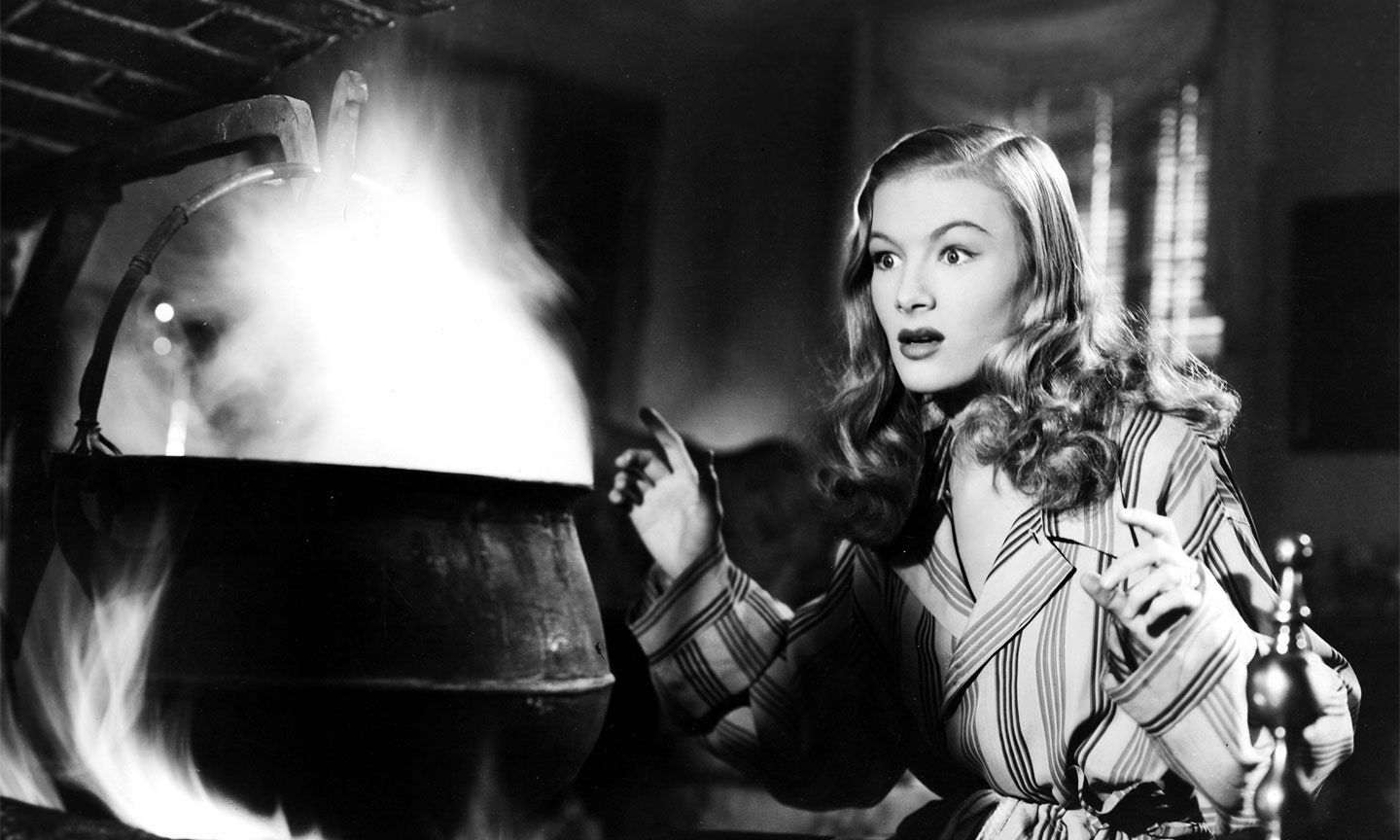 “Long ago, when people still believed in witches …”

I Married a Witch (1942), René Clair’s sexy ghost story by way of a cockeyed American romantic comedy, is a delightful and deftly made little trifle with Veronica Lake at her best as the daughter of an ancient supernatural trickster (played by Cecil Kellaway).

Resurrected hundreds of years after she’s immolated by Puritans in 17th century America, her released spirit (visualized as a plume of smoke) finds a comely body. That’s when she plots her revenge on gubernatorial candidate Wallace Wooley (Fredric March), the descendent of the man who sent her to the stake, on the eve of his impending marriage to a hard, cold, spiteful bride (Susan Hayward). Then her love potion backfires and she falls in love with the mortal.

For all the playful fantasy and cheeky humor, there is an unexpected gallows humor running under the energetic comedy and rapid-fire gags and a very adult sensibility to Lake’s flirtations. Preston Sturges had a hand in the production (evident in the screwball flourishes) but it is the light touch and continental maturity of French director René Clair that stirs the ingredients into such a piquant cocktail.

For all the playful fantasy and cheeky humor, it’s a strange little film. It takes potshots at conventional morality and gives a very adult sensibility to Lake’s playful seductiveness, which she plays like a kid exploring her boundaries, and it slips a gag into the witch-burning prologue that decades later would be called Monty Python-esque. It’s part of the unexpected gallows humor that rumbles under the energetic comedy and rapid-fire gags. Yet it still manages a genuinely romantic outlook on life. It makes for a wonderfully offbeat little romantic comedy for the Halloween season or anytime of the year.

It earned an Academy Award nomination for Roy Webb’s score.

, iTunes, GooglePlay, Fandango, Vudu and/or other services. Availability may vary by service.
I Married a Witch (Criterion Collection) [Blu-ray]

On Blu-ray and DVD from Criterion. There is print damage (from surface scuffs to chemical degradation that gives brief sections a splotchy quality) but the disc is well mastered and it delivers a strong film image. Given the limitations of the source material, pulls a strong image out of the noise and makes it eminently watchable. The disc is light on supplements – just an archival 20-minute radio interview with director René Clair (audio only) – and comes with a booklet featuring an essay by Guy Maddin and a 1971 print interview with Clair.