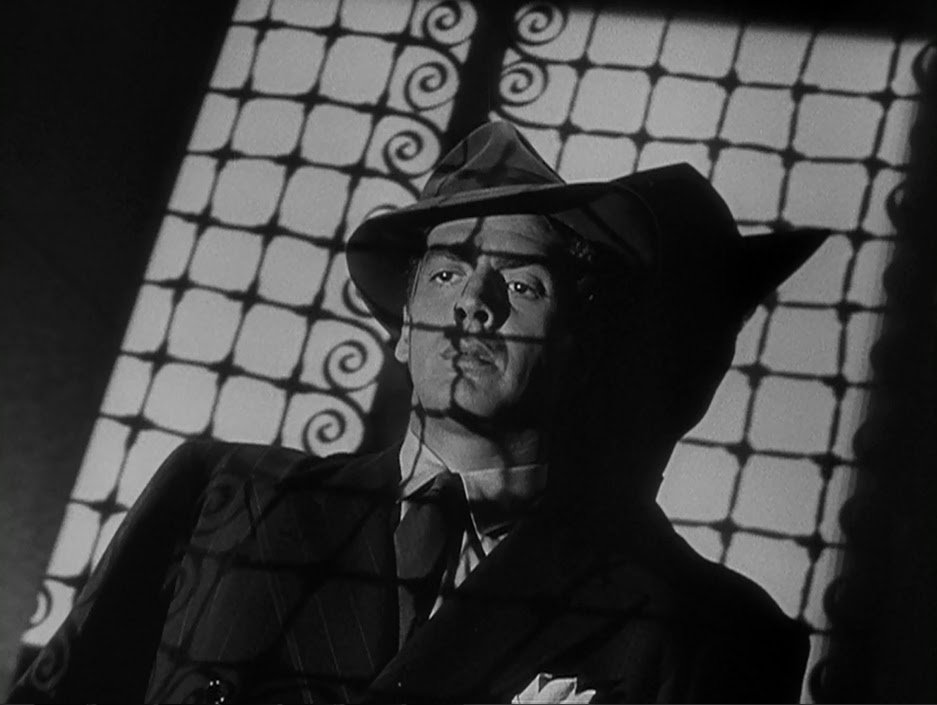 I Wake Up Screaming (1941) is not just one of the great movie titles of classic cinema, it is one of the films that established the distinctive style and attitude of film noir.

It kicks of with the blast of a headline shouting BEAUTIFUL MODEL FOUND MURDERED and jumps into the third degree given to swaggering sports promoter Frankie Christopher (Victor Mature) under the glare of a blinding lamp in a rather suspicious room of worn brick and cast-off furnishings, more of a cell than an official interrogation room. Mature is lit up in the center of the screen while hard shadows assault the walls and slashes of light and looming silhouettes give the cordon of cops wrapped around him a look more like intimidating mob hoods than New York’s finest.

On the other side of the dungeon door is the public side of the detective’s room where Jill Lynn (Betty Grable), the victim’s sister, is treated more gently, but she’s just as trapped. When the camera swings around we see a cage around her. The picture opens with a punch and the backstory is quickly filled in with jabs of flashbacks, jumping back and forth between the smart mouthed dandy of a promoter and the demure young woman as they lay out the events leading up to the murder of ambitious Carole Landis, the hash slinger promoted to celebrity success by Mature like a noir Pygmalion.

Who knew journeyman director H. Bruce Humberstone had such an eye for expressionist images and hard shadows? The guy was a real journeyman; he came to the film from Charlie Chan movies and Fox programmers and went on to direct a bunch of bright Fox musicals. There’s really nothing else like I Wake Up Screaming in his career and more’s the shame for it’s terrific. The film is set in New York City and shot on the Fox backlot, which gives the city scenes that slightly artificial, exaggerated quality (The swimming pool scene, there to get Mature’s shirt off and Grable in a bathing suit, is the same pool used in He Ran All the Way; note the fountain in the middle of the pool). He guides Grable through her first real dramatic role and puts Mature in a vehicle that uses his smiling arrogance and glib confidence to great effect.

Laird Cregar sets the templates for the obsessive, intimidating police detective and the stocky, soft-spoken noir heavy alike as the maverick cop determined to send Mature to the chair. He has a delicious lazy-eyed manner as he raises his chin and looks down on his suspects, a suggestion of contempt without changing expression, and he and Humberstone use his bulk to dominate and intimidate without being too overt. He’s a more measured and urbane version of the type that Charles McGraw and Raymond Burr would carry on through the genre.

The score is technically by Cyril J. Mockridge (uncredited) but it leans on Alfred Newman’s Gershwin-inspired “Street Scene” theme, which became the unofficial theme for 20th Century Fox noir. It sets the right tone for a New York noir but the use of “Somewhere Over the Rainbow,” which weaves through the score as Grable’s theme, is a little more curious.

Also on Blu-ray and DVD and on SVOD through Amazon Video, iTunes, GooglePlay, Vudu and/or other services. Availability may vary by service.
I Wake Up Screaming (1941) [Blu-ray]

I Wake Up Screaming [DVD]

On Blu-ray from Kino Lorber and DVD from Fox. The Blu-ray appears to be a high quality HD transfer of a preservation print rather than a restoration or a transfer from the negative. There is minor damage on the reel ends, your basic wear and tear, with scuffs and scratches but nothing major, and some light vertical scratches periodically show. More apparent is the crackling on the soundtrack in a few spots, no more than a couple of seconds and not overwhelming. A good digital cleaning would have been nice but it’s a solid fine grain print with a sharp image, excellent contrasts, and rich gray scale. The clarity is superb—the wisps of smoke caught in the beams of light in the interrogation scene are at once sharp and ghostly, and it shows off the lighting in the key chiaroscuro scenes beautifully.

Carried over from the 2006 DVD is commentary by film noir historian Eddie Muller, which is full of information but also easygoing and conversational. Muller’s boxing past is evident when he criticizes the line “I own a piece of the boy in the green pants.” Boxers wear trunks, and that’s got to rankle Muller (whose father was a newspaper boxing columnist) more than it bothers your usual noir expert. It also features three minutes of stills and advertising from the film, and from the alternate campaign prepared for the film under its original (unused) title “Hot Spot.” Two supplements listed on the back cover—the alternate Hot Spot opening title sequence and the deleted scene “Daddy” (both featured on the 2006 Fox DVD release)—are nowhere to be found on the disc.