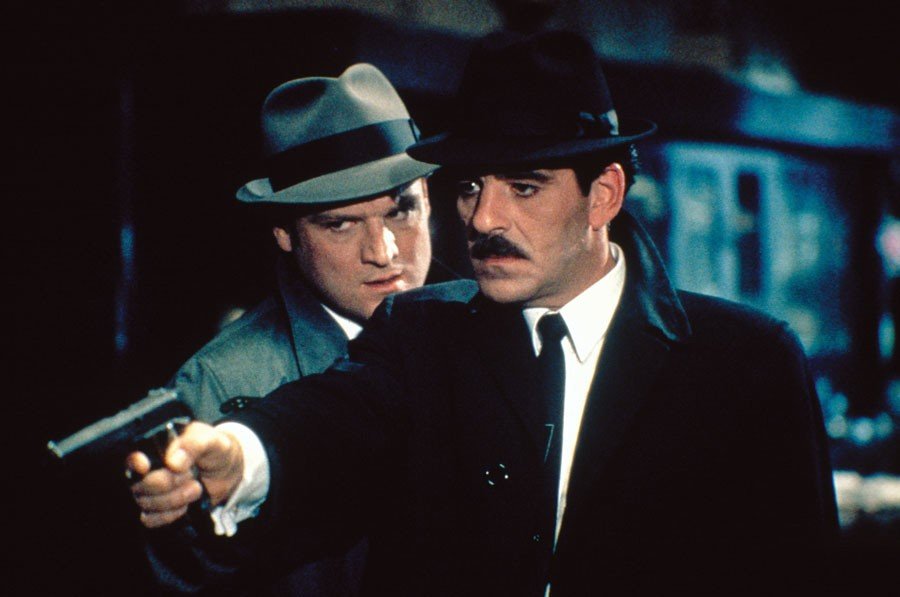 The history of television is full of great crime shows, from Dragnet to Hill Street Blues to Homicide: Life on the Street to The Wire and beyond, but small screen noir is a rare treasure indeed. Let’s face it, TV rarely embraced the visual style or hard-bitten, world-weary, often cynical attitude that defined noir as much as subject matter, setting, and iconography.

There are a few classic shows that embraced the sensibility, at least as much as network standards and practices allowed, and, in the past couple of decades, crime TV has allowed itself to slip into the heart of darkness of modern noir. And thanks to the voracious need for streaming content, many of these shows, past and present, are now readily available on major streaming services. ane double life” married to both Joan Fontaine and Lupino.

Blake Edwards’ Peter Gunn (1958-1961), starring Craig Stevens as TV’s most debonair private-eye, presents a veritable digest of B-movie film noir conventions and a striking visual style on austere, often abstract sets filled with fog and smoke and lit with bold shadows cutting through a twilight haze, distilling the noir look into a stripped-down style for the low fidelity of late-1950s black-and-white broadcast TV.

“There are eight million stories in the Naked City. This has been one of them.” Like the 1948 film of the same name, the Emmy-winning cop drama Naked City (1958-1963) took the cameras out of the studio and into the streets of New York. It’s less procedural, however, than a Playhouse 90–style anthology wrapped around a criminal investigation, thanks in large part to meaty stories by Stirling Silliphant and a guest cast roster that includes (among many others) Gene Hackman, Robert Redford, Dustin Hoffman, Robert Duvall, and Walter Matthau.

Michael Mann produced Crime Story (1986-1988), a ’60s-era blast that stirs old-time gangster thriller, modern mob movie, and early rock-and-roll culture into one of the most stylish crime shows on TV. Dennis Farina stars as the obsessive leader of a Chicago anti-crime unit in season one and relocates the squad to the bright lights and casino action of Vegas for the second and final season. Hardboiled dialogue, urban energy, and tough-guy camaraderie packs this nostalgia-laced neon noir with dramatic punch as well as snazzy style.

The Americans (2013-2018), set in 1980s Washington D.C. with Keri Russell and Matthew Rhys playing deep-cover Soviet agents in suburban America, takes on issues of parenthood, patriotism, and morality through the dramatic crucible of an espionage drama.

More contemporary is Bosch, an Amazon Original series based the novels of Michael Connelly and starring Titus Welliver as LAPD homicide detective Harry Bosch (see review on Noir Now Playing). Five seasons now available. And if you like your detectives on the dark and brutal side, see the BBC crime drama Luther (2010-2015) with Idris Elba; four seasons available.

Finally, three terrific, hard-edged HBO shows with a noir sensibility are currently available to stream on Amazon Prime: violent prison soap opera Oz (1997-2003), David Milch’s ruthless frontier drama Deadwood (2004-2006), and David Simon’s brilliant The Wire (2002-2008). They may not last long on Amazon (Warner is launching its own streaming service at the end of 2019) so stream ’em while you got ’em available.

Netflix lacks the deep catalog of past TV that Amazon presents, but they do have a few contemporary shows to appeal to noir sensibilities.

Mindhunter, which traces the creation of the FBI’s Behavioral Science Unit in the late 1970s, isn’t so much noir as a smart, intense series that sends its agents (played by Jonathan Groff and Holt McCallany) into the psychology of serial killers. David Fincher directs four of the first ten episodes. Season two drops August 16.

Altered Carbon drops a film noir murder mystery in a future that combines the look of Blade Runner with a decadent, brutal culture out of Caligula’s Rome. Smart it isn’t, but it looks cool and offers a badass PI (Joel Kinnaman) in a world where the rich are above the law. A second season is in production.

In the realm of superhero noir, no series captures the urban palette of the corrupt city better than the Fox series Gotham (2014-2019), the pre-Batman series centered on Detective Jim Gordon (Ben McKenzie) as he battles the rise of the supervillain. Four seasons available; the fifth and final season comes to Netflix soon.

And you could reasonably call Riverdale: Seasons 1-3 a teen noir. I like to think of it as the Archie gang transported to the small town gothic of David Lynch’s Blue Velvet and Twin Peaks.

Veronica Mars ran for three seasons in the 2000s as a Nancy Drew-meets-Raymond Chandler mystery series with Kristen Bell as a high school detective. The new Hulu revival picks up over a decade later with Veronica now a thirty-something private detective and the California beach town of Neptune more economically polarized and corrupt as ever. It’s in the ’70s-style SoCal noir with contemporary flair, snappy writing, and all the denial you could want in a private eye. Review coming to Noir Now Playing soon. Hulu also streams the original three seasons.

The limited series Mystery Road (2018), a TV spin-off of the 2013 film of the same name, takes Aboriginal police detective Jay Swan (Aaron Pedersen) to the Australian Outback where he teams with a police chief (Judy Davis). The sunbaked mystery is top-notch drama anchored by two superb performances.