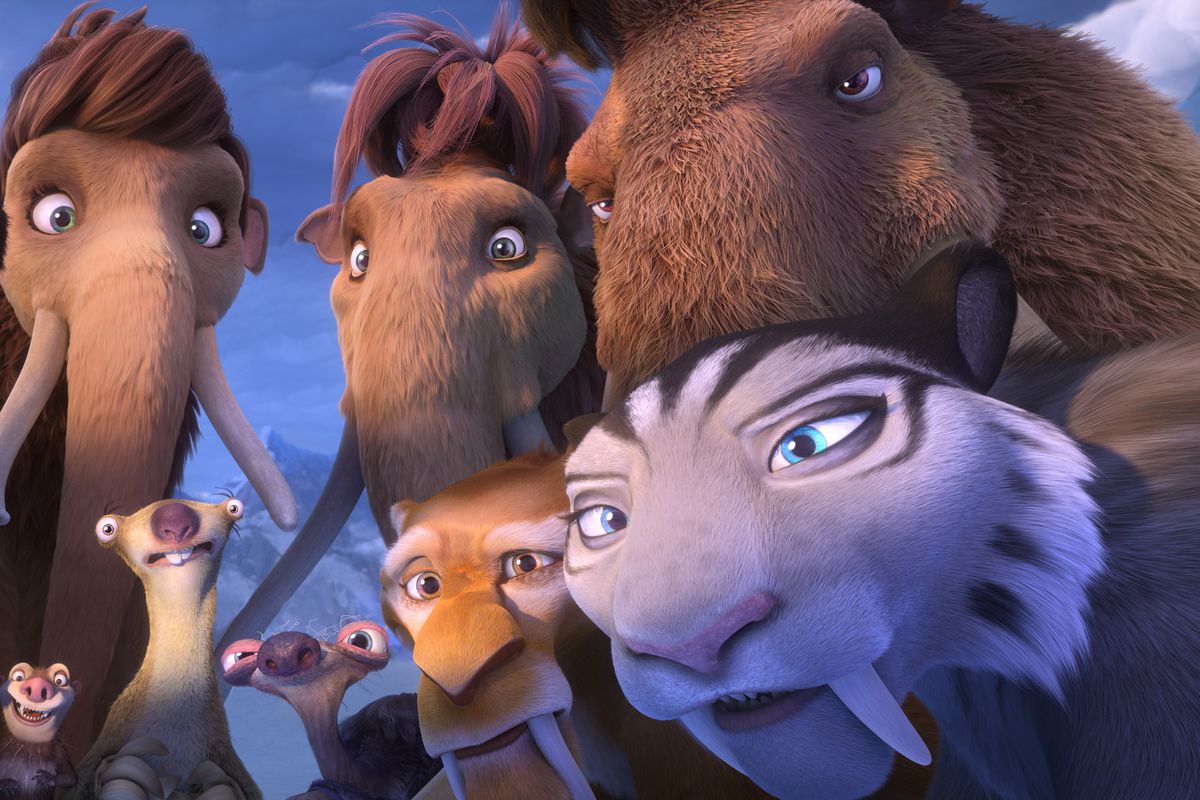 Think of Ice Age (2002) as The Jungle Book with a case of frostbite.

An unlikely trio of prehistoric beasts–growling but good hearted Manfred the Mastodon, motormouth rascal Sid the Sloth, and scheming spy Diego the Sabertooth–interrupt their migration to deliver a foundling man cub back to his “herd.” Just to complicate things, Diego has been sent to retrieve the human baby for the vicious sabertooth lion king’s banquet, which tears at him as he becomes attached to the mancub..

The opening sabertooth attack on the human tribe and the mother’s desperate escape with her infant may be too intense for very young children but rest assured that no cartoon blood was shed in the making of this picture. The balance of the adventure’s calamities—volcanic eruptions, tetchy rhinos, and an underground ice-slide that sends the team racing like an out-of-control bobsled—are decidedly more fun and less unsettling.

It’s a lot more stripped down than the Pixar style and the fields of clear blue skies, bright white snow, and icy glacier mountains, give it an oddly abstract setting, like an indistinct Road Runner cartoon. This snow cone could use more flavor.

The personality emerges from the voice cast, who achieve a chemistry in their by-play. Ray Romano, with his mid-throat foghorn voice, plays the wounded heart-of-gold loner Manfred with gruff and grumpy attitude softened by the slow bonding. John Leguizamo’s Sid is a twittering chatterbox on caffeine and Denis Leary slows his usual brittle speed speak to a slow, smoky threat as Diego.

The film launched one other breakout character: Scrat, a twitching mutant rodent that darts and scurries through the picture as if wired on a dozen cups of espresso, trying to bury an acorn in the frozen ground to comic, and often apocalyptic, effect. It has reappeared in every sequel and even appeared in its own animated shorts.

Cute and often clever, there’s nothing particularly memorable in this computer enhanced rerun, but this harmless little comedy has a warmth that melts the frozen plot.

It was an Oscar nominee for animated feature.

The Blu-ray and special edition DVD feature commentary by director Chris Wedge and co-director Carlos Saldahna, a making-of documentary featurette and eight shorter featurettes, and deleted scenes among the supplements.