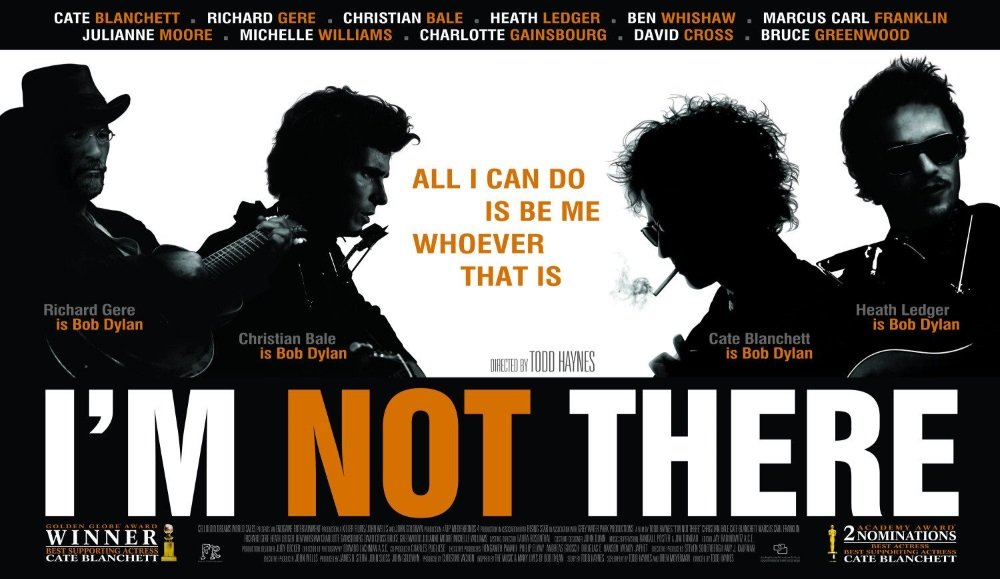 The songs, lives (real and imagined) and mysteries of Bob Dylan make up the soil from which Todd Haynes raises I’m Not There (2007), not a biography by any conventional definition but an impressionistic survey of the artist, his art, his interaction (and at times collision) with the culture he both grabs onto and flees, and the mystery that still surrounds Dylan.

This is a freewheeling Bob Dylan portrait where his name is never spoken and his life and career is represented by six different actors representing various personas: Jack Rollins (Christian Bale), the early folksinger icon who burst from the coffee-house scene into the spotlight, embraced by a subculture as the genuine article; Jude Quinn (Cate Blanchett), the electric, weird, wired-on-amphetamines Dylan who riffs and fidgets through interviews and whose name evokes the inevitable cry of “Judas” in his England tour; and others: an actor (Heath Ledger) who once played Jack Rollins in a biopic, an 11-year-old hobo who spins tales of his past (Marcus Carl Franklin), an aging cowboy (Richard Gere) in a town populated by characters from Dylan songs, a poet (Ben Wishaw) who calls himself Arthur Rimbaud.

Styles change from persona to persona, from the Don’t Look Back B&W cinema verité look of Quinn’s England tour (along with salutes to A Hard Day’s Night and Fellini movies) to the steeped Hollywood cinema colors of the actor’s life to the mock-doc survey of the early folksinger (with Julianne Moore in the Baez role). As spun by Haynes, they are all different people in the same musical universe rather than steps along a journey. Haynes opens the film on the singer’s death and autopsy. By the end, the autopsy reveals nothing but more mysteries and contradictions, a man more defined by his lyrics than his life, and constantly confounding the culture always looking to put boundaries around him.

I’m Not There is as much about the cultural connection to Dylan, and the feelings of loyalty and betrayal that his inspired, as it is about the man himself. Faced with an artist defined more by his lyrics than his life story, Haynes delivers a song-cycle of a movie: vivid, exaggerated, contradictory impressions of a man who confounds a culture looking to peg him with a definition.

Cate Blanchett earned an Oscar nomination and a Film Independent Spirit Awards for her performance, and the film won three awards at the Venice Film Festival.

Also on DVD and on SVOD through Amazon Video, iTunes, GooglePlay, Vudu and/or other services. Availability may vary by service.
I’m Not There (Two-Disc Collector’s Edition) [DVD]